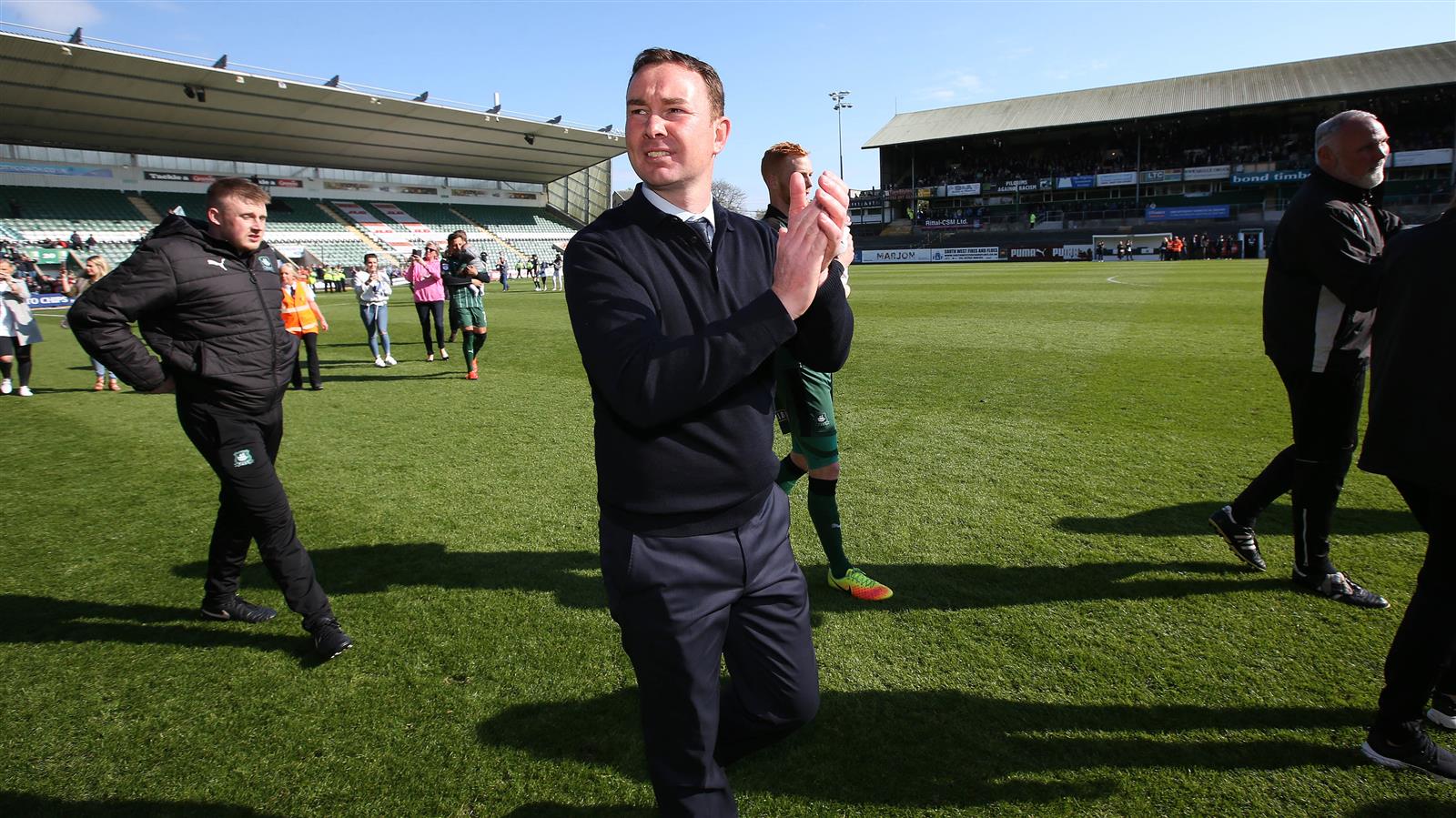 AFTER previously writing off Argyle’s chances of winning the title, it seems Derek Adams may have had other plans all along...

...as his side’s 2-1 win over Crewe took them top of the league with one game to play.
The Pilgrims go into next week’s trip to Grimsby Town knowing that another victory would secure the Sky Bet League 2 title. That’s after yet another dramatic afternoon in this memorable campaign, as Argyle overturned a 1-0 deficit to record a 26th win of the season – one more than Portsmouth and Doncaster Rovers, who Argyle will contest the title with next weekend.
The Greens had it all to do at half-time, as an excellent strike from James Jones in the sixth minute put the hard-working visitors ahead, working around Argyle’s press and staying firm in defence.
“In the first half, there wasn’t much in the game,” said Adams. “They scored an early goal and then we were camped inside their half for the majority of the time.
“I thought we had more of the ball. They scored after six minutes, but I didn’t see them troubling us after that. We had a lot of possession, but we just needed to turn the screw and get that goal that was going to put pressure on them.”
A handful of sides have come to Home Park, scored early and kept Argyle out, but this time round, roared on by the Green Army, Adams’ side broke through and fought level in the 74th minute, courtesy of Ryan Taylor. The momentum immediately shifted and the turnaround was completed five minutes later, as Nathan Blissett powered in a header from Graham Carey’s cross, sending Home Park into raptures.
“When we get the goal, it gave everybody a huge lift,” said Derek. “When you score a winning goal to put your side top of the league; it’s a fantastic atmosphere around the stadium, and everybody’s willing us on to do well.
“Obviously, to get the three points is the main aim at this stage of the season, and we were able to get it today. Ryan Taylor was able to get his goal and so did Nathan Blissett. We’re delighted.”
Only a matter of weeks ago, Adams declared Argyle’s title hopes over, with automatic promotion the sole aim. Now, though, after a superb run of form and a serious slip from Doncaster Rovers, the Pilgrims’ chances of taking the Sky Bet League 2 title are in their own hands. According to Derek, it was all part of the plan.
When I asked if he truly believed Argyle could not win the title, Derek said: “Of course I didn’t believe it.
“I had to say it because it then put pressure on Doncaster, and that’s what you’ve got to do. They have slipped away, [but] they’ve still got a chance of winning the title, along with Portsmouth.
“It’s great that we’re top of the table. It is in our own hands now, and that’s a fantastic position to be in. From the start of the season, to say that we’re at the top of the table and would have it in our own hands to win the title; it’s fantastic. It shows how well the players have managed to perform this season and it’s great for the city.
“We’ve got a long way to go in Grimsby, and a 5:30pm kick-off. It’ll be interesting to see who Sky chooses for their match! We’ll wait and see.”