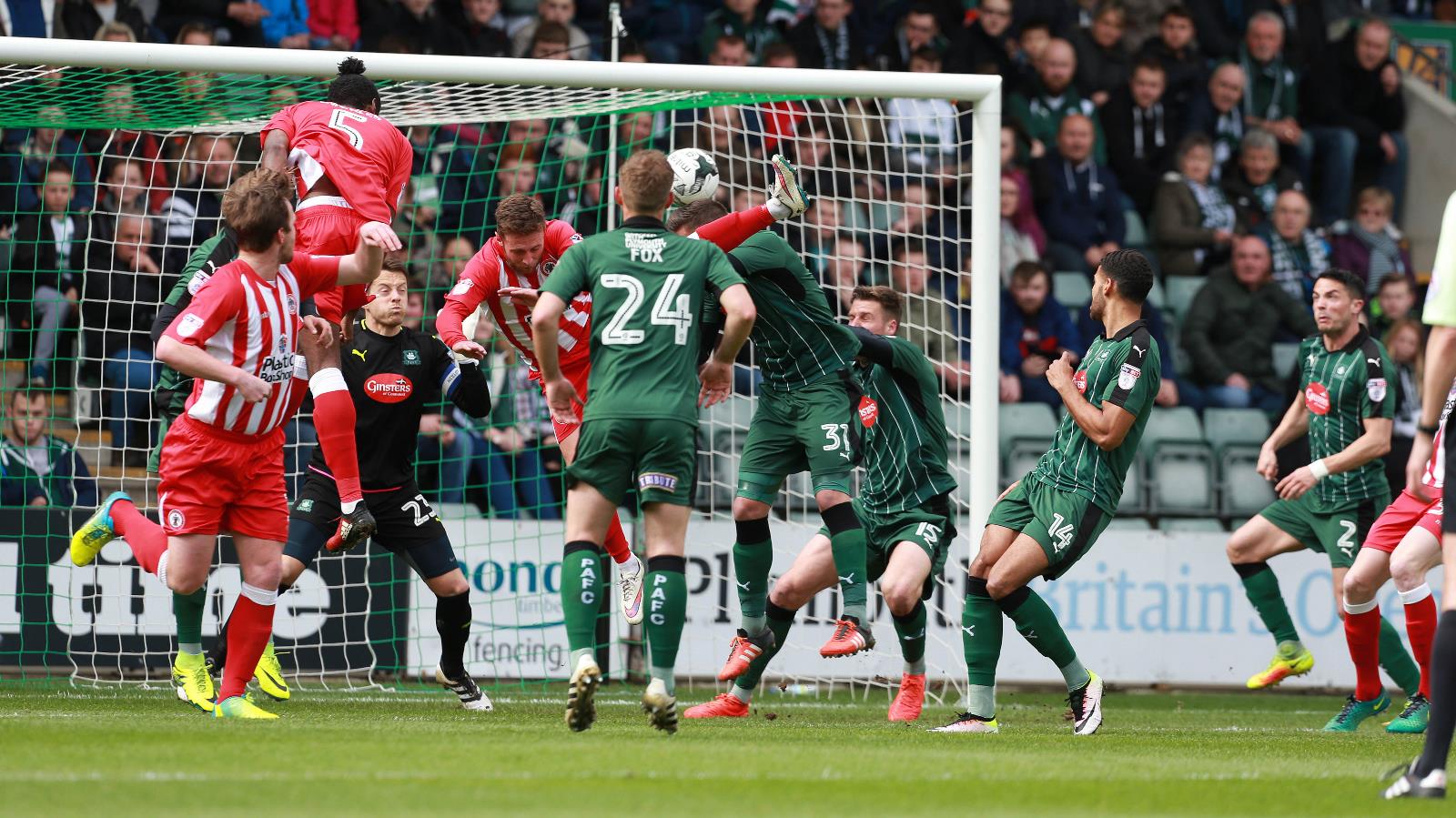 Argyle 0
Accrington 1
Clark 8
by Rob McNichol
ARGYLE'S promotion charge was dealt a reality check in the form of a flying Slovakian.
After pre-season Argyle trialist Jordan Clark provided a variant on the returning player rule, scoring the game's only goal, as early as the eighth minute, the game saw an increasingly dominant Argyle performance, but every time the Pilgrims managed to breach Stanley's tough defence, they could not find a way past Accrington goalkeeper Marek Rodak, who repeatedly flew through the air to prevent everything Argyle could at him - and to the side of him, and above him...
Stanley held on to increase their unbeaten run to 12 games, while Argyle looked agonisingly at a set of results that saw only one other team in the top eight lose - and that was Blackpool being beaten by fifth-placed Luton Town.
Argyle boss Derek Adams had opted to stick to the same starting 11 for a fourth straight game, and the game seemed to still be in its feeling-out stages when Sean McConville clipped in a left-wing free-kick that Clark glanced inside the post.
Accrington took an opportunity to try to hurt a shell-shocked Argyle with Shay McCartan bursting through the middle far to early, past a seas of dangling, uncertain Argyle legs. Luke McCormick made an excellent save to prevent McCartan, who then got the ball back, and unconvincingly dived to try to win a penalty. Referee Darren Deadman saw through the act, and cautioned McCartan.
Clark then crossed into Billy Kee, who headed straight at McCormick, and it took Argyle the best part of the first half an hour of the game to really get going.
When the Pilgrims hit their straps, they really did not want the half-time break to come. First Jimmy Spencer wriggled into space with terrific persistence, but his cut back found naught but unoccupied space.
Next, Rodak's first telling contribution, as Jake Jervis carefully steered a Matty Kennedy cross into the path of Antoni Sarcevic, whose shot was well kept out by the Stanley goalie.
Spencer, from range, skimmed a post as the last action of the first period. Argyle were not at their best in the opening 45 minutes, but one felt momentum was building.
Little occurred in the minutes after the restart, other than a Matty Pearson that struck Argyle's bar, but that McCormick had plenty covered. Adams' reaction was a triple change, bringing on Ryan Taylor, Nathan Blissett and Yann Songo'o for Jervis, Spencer and Kennedy. Argyle changed to a 3-4-3 system, signalling attacking intent.
Songo'o headed over a free-kick to get the ball rolling on second half chances, but while Argyle were playing almost exclusive on the front foot, they were nearly caught out from a Stanley break that saw McConville head to the near-post, only for McCormick to thrust clear, before Kee's follow-up effort was charged down.
Back in front of the Devonport End, Carey hugged the touchline and caressed a dinked cross that Oscar Threlkeld, perfectly timing a wing-back run, met with his head. The header crashed in to the deck, bounced high, and came to rest on top of the net, not under it.
David Fox, the best player on the park on the afternoon, was setting Argyle's tempo as he so often does, and from a gloriously clipped free-kick came a bullet header from Songo'o. Rodak saved, pirouetting almost, and as the ball went out for a corner, the more pessimistic - or realistic?- Argyle fans started to wonder about 'one of those days'.
Argyle were by now attacking in waves, having switched to a flat back four with a diamond midfield with Stanley clearances generally finding McCormick or one of his centre-backs, who sent the ball back into the danger area.
A Sonny Bradley diagonal ball to that Taylor won sat perfectly for Carey, who arrived suddenly and got his effort on target, but there was Rodak again, extending finger muscles he may not have known he possessed, tipping over once more.
From the corner, taken short, Carey flicked into the box, where Blissett saw an effort blocked. Another Carey cross followed minutes later, finding Taylor who hooked goalwards. Rodak's save, high and to his left, was probably the best of his plentiful bunch.
With a certain amount of irony, McCormick was the last keeper called into action, making a terrific double stop when McCartan breezed past an ailing Jakub Sokolik and headed for goal. McCormick's first save fell to Kee, who again found the blocking powers of Argyle's skipper.
And so it ended, with Argyle throwing ball after ball into Stanley territory, but being repelled until a Deadman's whistle halted the proceedings.
That may well be that for Argyle's title aspirations too. Doncaster's six point gap looks a tough one to call in. However, the 10-point gulf that exists between Argyle and the dotted line is a comfort.
Onwards, to Crawley.
Argyle (4-3-3): 23 Luke McCormick (capt); 2 Gary Miller, 31 Jakub Sokolik, 15 Sonny Bradley, 8 Oscar Threlkeld; 7 Antoni Sarcevic, 24 David Fox, 20 Graham Carey; 14 Jake Jervis (4 Yann Songo'o 57), 9 Jimmy Spencer (13 Nathan Blissett 56), 16 Matty Kennedy (19 Ryan Taylor 56). Substitutes (not used): 3 Gary Sawyer, 8 Jordan Slew, 11 Ryan Donaldson, 21 Vincent Dorel (gk).
Booked: Songo'o 81.
Accrington Stanley (4-4-2): 12 Marek Rodak; 32 Harvey Rodgers (30 Janoi Donacien 45), 3 Mark Hughes, 5 Omar Beckles, 2 Matty Pearson; 7 Jordan Clark, 16 Noor Husin, 28 Seamus Coneely (capt), 11 Sean McConville; 10 Shay McCartan, 9 Billy Kee. Substitutes (not used): 9 Terry Gornell, 14 Romuald Boco, 18 Steven Hewitt, 19 Brayden Shaw, 20 Aaron Chapman (gk), 24 Jonathan Edwards.
Booked: McCartan 16, Husin 71, Donacien 76.
Referee: Darren Deadman.
Attendance: 9,708 (52 away).