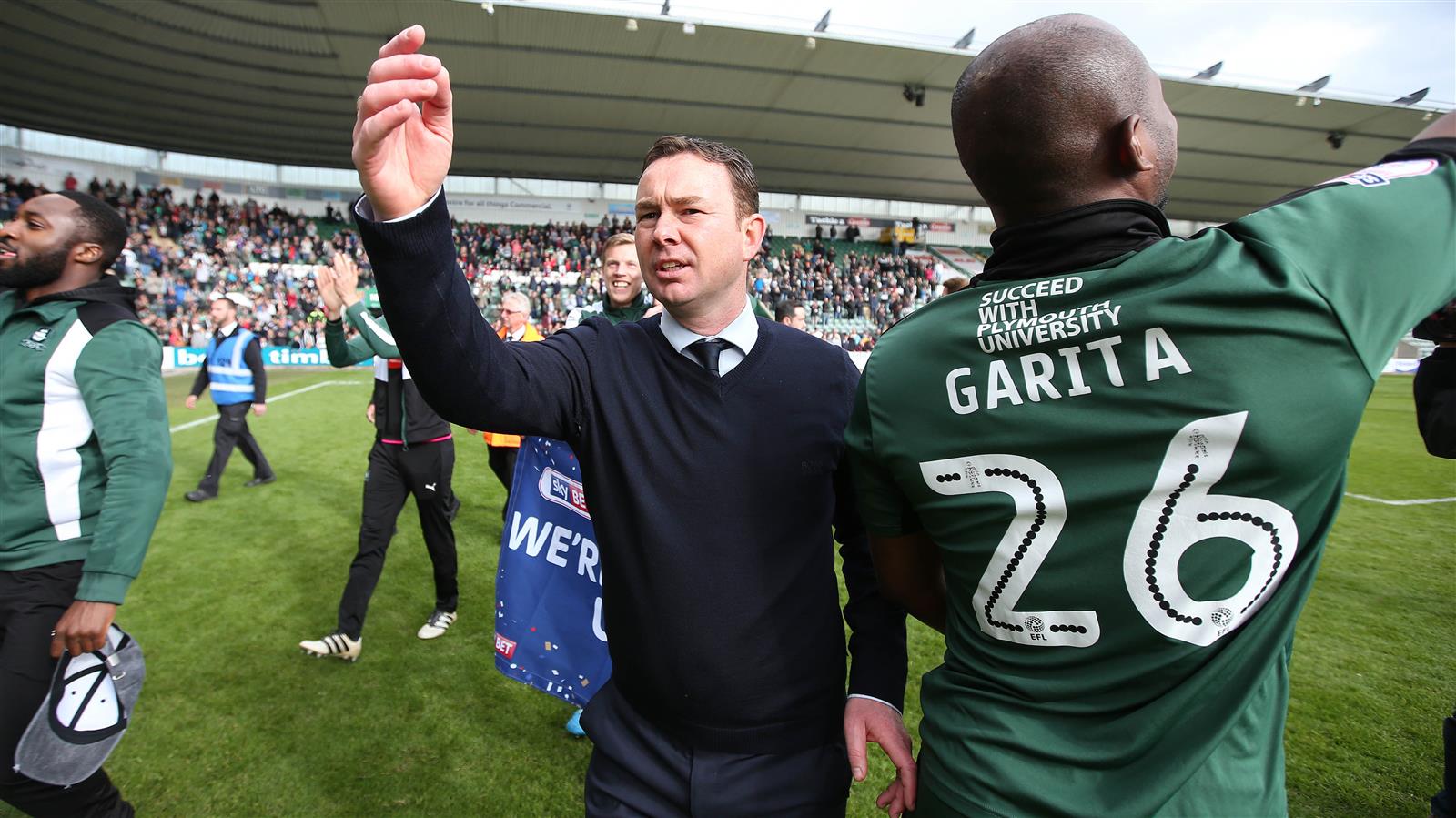 ARGYLE’S 6-1 victory over Newport County marked one thing in the mind of Derek Adams, for both this season and his tenure at Argyle: mission accomplished.

Sky Bet League One football now awaits the Pilgrims in the 2017-18 season, as an emphatic victory over the Exiles secured an automatic promotion spot. Argyle’s ascent to English football’s third tier was sealed in style, as doubles from Jake Jervis and Matty Kennedy, as well as superb strikes from Ryan Taylor and Graham Carey, sent a packed-out Home Park into an unforgettable frenzy.
“We’ve played in a manner that this football club likes,” said Derek. “We had a great all-round performance. We got players that have put in a terrific shift throughout the season, and they’ve been able to score goals. We’ve seen today the standards they can play to.
“Today was going to be a difficult match. Newport were trying to get a win that would take them out of the bottom [two], and we were trying to get that win to get us automatic promotion – and we’ve certainly done that today.
“There was a lot of pressure on us today, and the players have really dealt with it well. I thought that the way they wanted to score goals today – we played in a way that was going to damage Newport. We went three-for-three against them at the top end and it caused them trouble.
“I think that we had a lot of good play and opportunities. We just needed that goal, and we got the two goals quite quickly. We’ve shown that when we do that, we can play with a great deal of confidence.
“I think the players knew today was the day. The players have shown that when that pressure comes, they can deal with it. You need the 2-1s; you need the 1-0 victories to get yourself in this position.”
The victory, and the promotion, completes the key goal set to Adams when he arrived at Home Park in 2015: taking the Greens out of League Two. Continuing the club’s miraculous recovery from the brink of liquidation in double-quick time, sealing the Greens’ first promotion in over a decade was always the target for the boss.
“To get this football club back into League One was my priority when I came to the football club two years ago”, said Adams.
“Last year, we had the 10th-highest budget in the league and we were able to get into a play-off final. That’s the reality. We dismantled the squad over the summer and rebuilt it. The players we’ve taken in have shown good work ethic and composure and technical ability. They’ve got good determination about them to succeed. That’s what we had to do over the summer, and we’ve been able to get the results.
“We’ve been able to have a really successful time. We’ve had a play-off final, we’ve had a good FA Cup run, and we’ve been able to have a promotion. The players, the staff, the supporters all wanted it, and we’ve all delivered.”