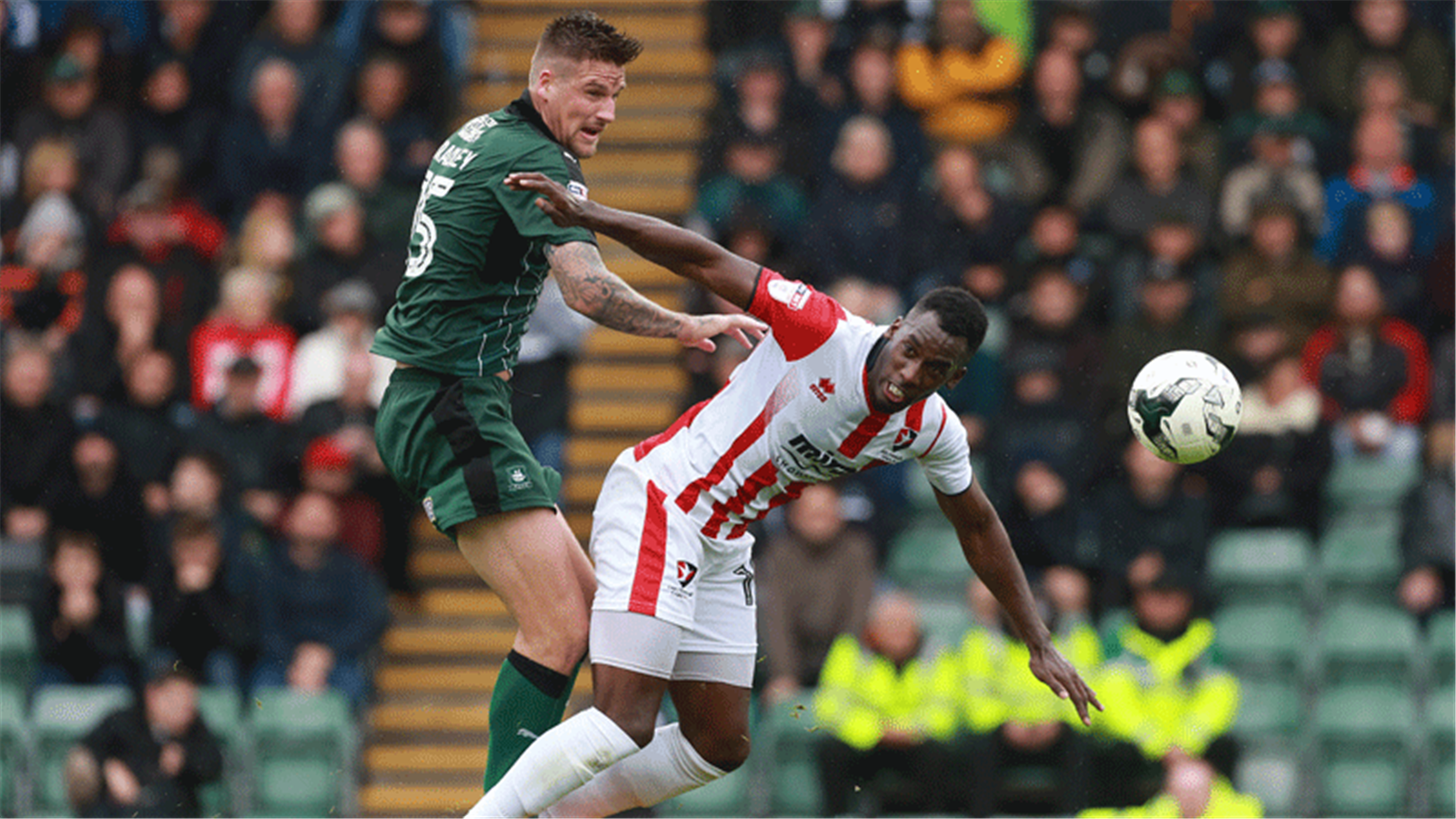 SONNY Bradley thinks that his manager Derek Adams has got it wrong – and that Argyle are still Sky Bet League Two title contenders.

Far be it from us to try to cultivate animosity where none exists; in truth, after defender Sonny’s exclamation that Argyle are still in the title picture, it was put to him that his boss had all but conceded the league to leaders Doncaster Rovers, who are six points ahead of the Pilgrims.
“I didn’t know the manager had said that, to be honest!” said Sonny. “I know the gaffer is a winner, and I know deep down he will still believe we can win the title – as do all the boys. We still think we can go on and win it.
“I do truly believe we can go on and win it. Obviously we have to rely on Doncaster getting beat, but they don’t have an easy run-in. They went to Grimsby and won 5-1 so you say ‘fair enough, well done,’ but in my opinion it is still all to play for.
“Nothing’s changed – that comes from the manager. Nothing has changed in training, we’re completely the same. Our ambition at the start of the season was to win the league title, and it still is. If we have the attitude that we can we can still win the league, and win as many games as we can, at the end of the season we should find ourselves in an automatic spot.”
Argyle face Crawley Town this Saturday, looking to take an important step towards ensuring promotion – and, indeed, attempting to haul Doncaster back in.
Crawley’s season is, to all intents and purposes, over. In 18th place, they are 12 points above the drop zone, and 14 behind the final play-off berth, so there is little to play before position in the league, and pride, for Dermot Drummy’s side.
This, though, does not make them easy pickings, says Sonny. Just because there is no divisional status to preserve, or to attain, does not mean the Reds will not be up for showing Argyle what they are about.
“There’s always motivation to have a good game,” said Sonny. “As a professional footballer you are expected to set standards and to perform not matter what position you are in.
They will turn up on Saturday wanting to beat us, and that’s what we have to deal with. I know Dermot, he won’t let them down tools, and with the reputation we have away from home, they’ll want to beat us.”
Should Sonny take the field on Saturday from the outset, it will be his 41st league start for Argyle. In other words, he has played every league game this season. He played all 46 league games for Crawley the season before. In fact, the last time Sonny Bradley was not named in an EFL starting line-up that he was eligible for was February 7, 2015.
For a combative central defender to have avoided injury, suspension and loss of form to such an extent is extraordinary, and it is a fact not lost on Bradley.
He said: “A lot of it is to do with keeping yourself fit, looking after your body, making the right lifestyle choices.
“When I‘m the position I am, as a centre-half, you are expected to be fit and strong. Being a centre-half is different to being an attacking player where you can be brought on in the last 20 in games.
“If you are a centre back and not in the team, you could go 30 or 40 games without getting a look in. You’ve seen it with players this season. I’d use Karleigh Osborne as an example. A very good player – I could see it in training – but when me and Bully were doing well at the start of the season, it was hard for him to get a game, and unfortunately he had to move on.”