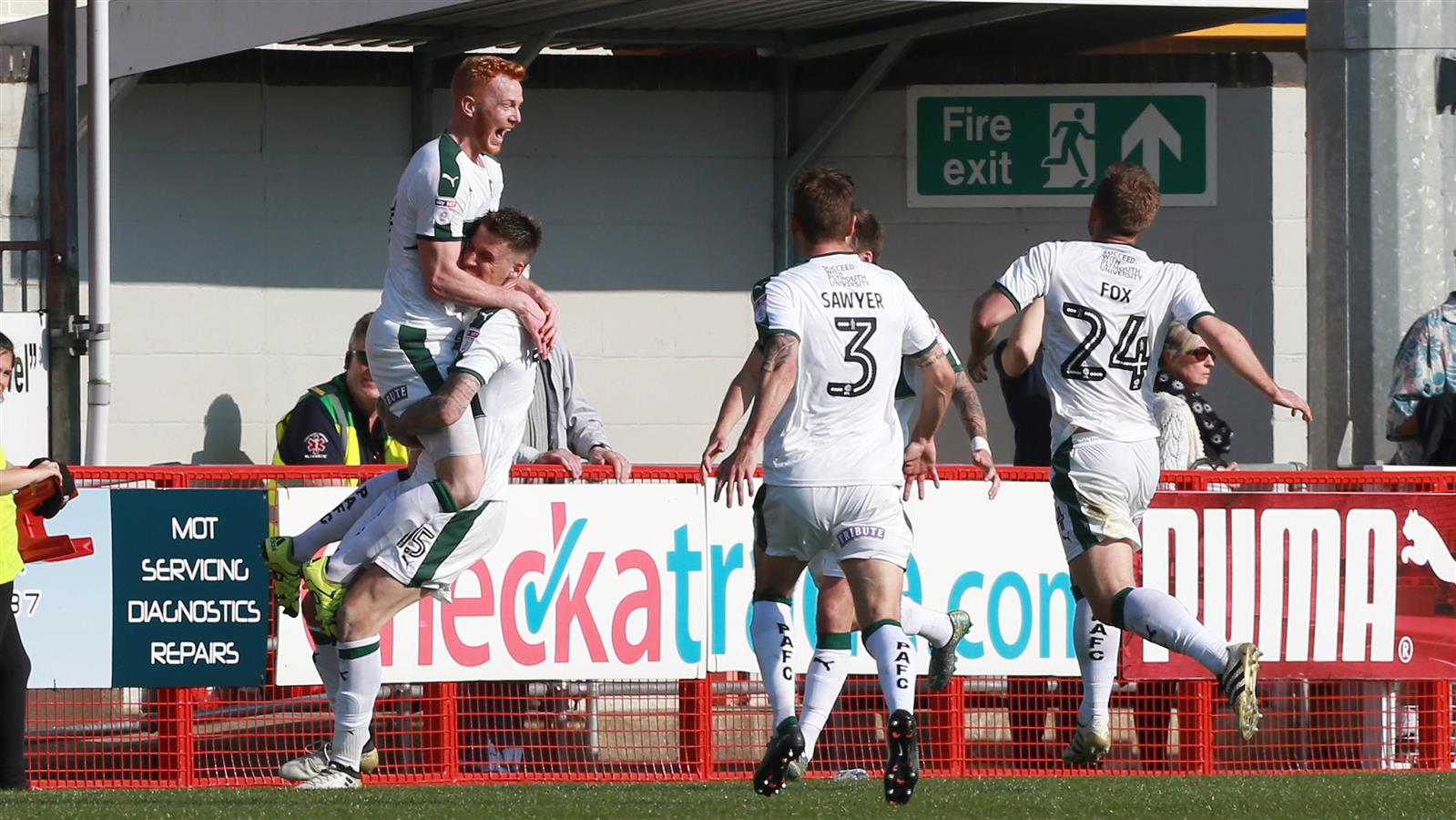 THERE would have been times at Crawley on Saturday that Ryan Taylor will have wondered whether a career in football, never mind taking part in Argyle’s 2-1 victory, was really worth all the aggro.

Pummelled from pillar to post by the home side’s centre-backs Mark Connelly and Joe McNerney for the thin end of 100 minutes, he battled through to have the last word in a match that was as uneasy on the eye as it was on his battered body.
Worth it? Of course it was. Tayls’ second goal since joining from Oxford United in the January transfer-window, deep into injury-time, put the Pilgrims potentially one match from promotion to Sky Bet League One.
“It was a great result,” said the Yorkshireman, who accepted a sweet header from former Crawley captain Sonny Bradley before blasting home a winner that sent 1,540 Argyle fans into various stages of delirium.
“Obviously, it wasn’t a pretty game but we got the three points in the end, which we needed.
“Sonny’s put a great little header through; I took a touch; a defender’s putting a bit of pressure on me from behind; and I’ve just lifted it over the goalkeeper. It was a great knockdown from Sonny and to get it that late in the game...
“It was great result for us because it was a sloppy game from start to finish. We didn’t play like we wanted to but, to get promoted, you’ve got to grind out games like that. I thought we showed some very good resilience to get the win.
“I’ve got a bit of bloody nose and a fat lip but that’s all part and parcel of being a striker in League Two, I guess. They had two big centre-halves that are very physical but the main thing is we got the result in the end.
“If I’m honest, it was a terrible game. It wasn’t really enjoyable to play in. [Crawley] made it horrible. We knew they were going to do that – we watched videos on them before the game and knew what they were going to be about, a physical side, as are most teams in this league.
“But we got the three points and that’s the main thing.”
Ryan showed admirable restraint not to react to the attentions of his markers, unlike his Crawley counterpart James Collins, who smacked Yann Songo’o in the mouth and was dismissed in the 79th minute.
“It always makes a bit of a difference, that extra man,” said Ryan. “We had more of the ball and we got to move them around a bit more. Obviously it showed in the end because we got the win.”
The importance of the result was not lost on anyone at the Checkatrade Stadium, and presumably on fans of promotion rivals Portsmouth – who Argyle remain four points ahead of and who they play next, on Good Friday – Luton and Stevenage.
“It was a massive game for us,” said Tayls. “We knew there was a bit of pressure on it to keep that gap and we’ve done what we needed to do and got the three points.
“The fans are unbelievable. They have kept cheering throughout the game. It was a poor game to watch – I could feel that, playing in the game – but they kept cheering all the way through and I think they get what they wanted in the end with that result.”