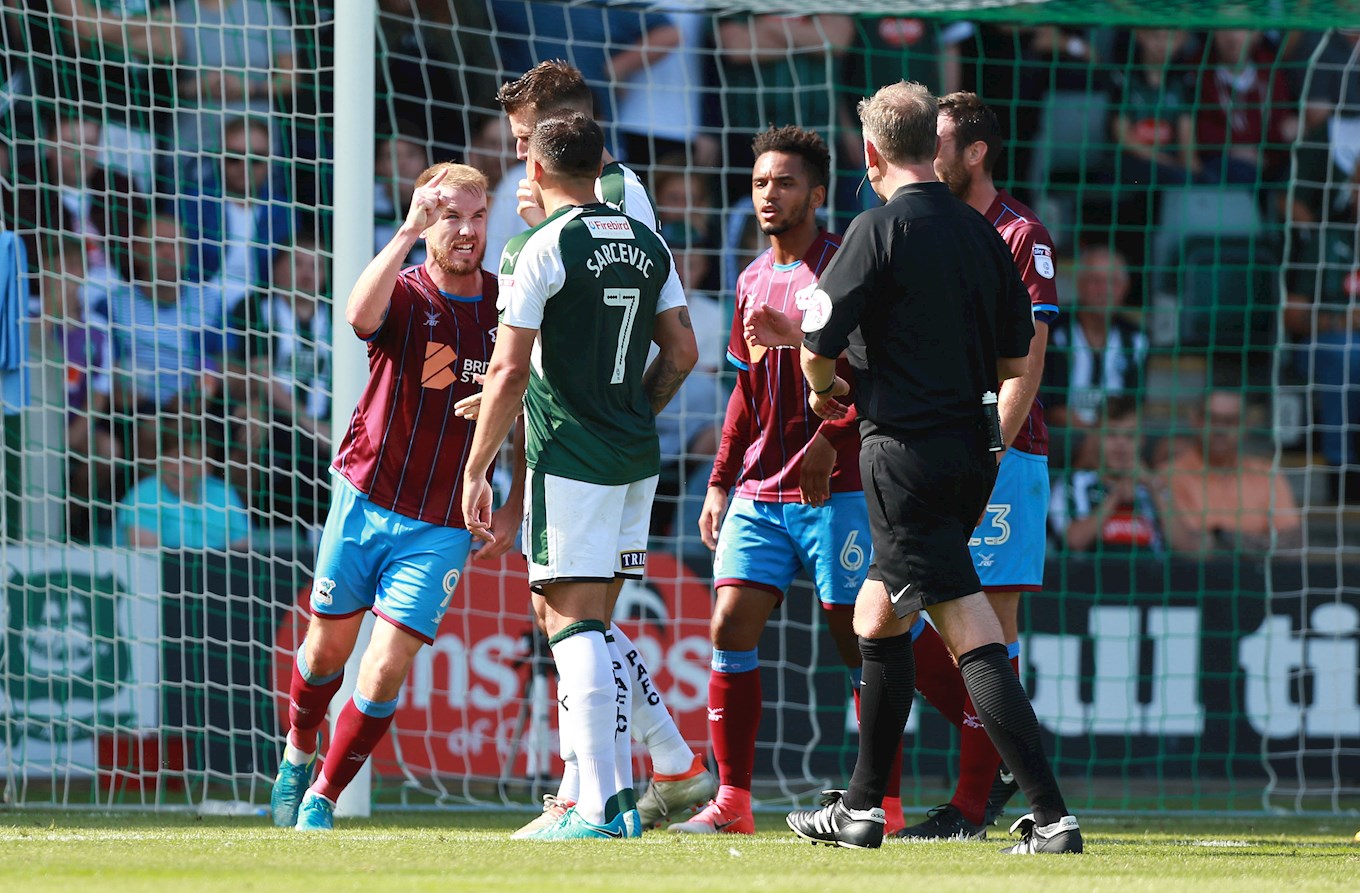 ANTONI Sarcevic’s dismissal against Scunthorpe United was the key turning point in the game, according to Argyle boss Derek Adams, going from a side on top to a side heavily beaten.

The Greens conceded four goals in a league game for the first time since February of 2014, as a Paddy Madden double and strikes and goals from Josh Morris and Tom Hopper gave the Iron a 4-0 win at Home Park.

However, Argyle applied themselves well in the opening half and were perhaps unfortunate to be behind, until Sarcevic was dismissed in stoppage time for clashing with Madden. Adams was disappointed with how both parties handled themselves, and now has to plan for upcoming games without the services of an important player.

“The sending off puts us on the back foot,” said Derek. “He supposedly made contact with the player, and he’s let his teammates down. He’s let myself down, because we’re down to ten players. After that it becomes a difficult afternoon, because in a game where I thought we were just getting into and controlling, we’re down ten against eleven.

“I didn’t see it as it happened. It was difficult for me [to see] at the time, but I’ve obviously been told it was. He shouldn’t be getting involved. I didn’t know how much contact there was, but if somebody makes contact with somebody nowadays, the other person in the team is going to fall down and use it to their advantage. That’s something that’s creeping into the game which is not nice to see.

“I don’t know how much contact there was so it’s difficult to say, but by the people I’ve spoken to, there wasn’t – but there was a motion there. My player has done that, and the opposition player has taken it upon themselves to fall to the ground. In that instance, the referee has no decision but to send him off.

“It’s a huge loss; he’s one of our most important players. He’s one that’s done really well for us.”

Whilst Sarcevic is now sidelined for the short-term future, other options are now at Derek’s disposal. Celtic loanee Nadir Ciftci debuted and was substituted late on, whilst midfielder Jamie Ness looks back to full fitness after the playing the entire match.

“He’s played 90 minutes, which is a good thing,” said Adams on Ness. “He probably had the most opportunities on goal for us today, from midfield and attack. It’s a positive out of a negative.

As for Ciftci, Derek said: “I thought the first touch he had was very good and his link-up play was excellent. You can see what he’s going to do for the football club; he brought players into the game.

“When it went to ten players it was going to be a hard afternoon for him, but when it was 11 against 11, he took the ball in and took us up the pitch."