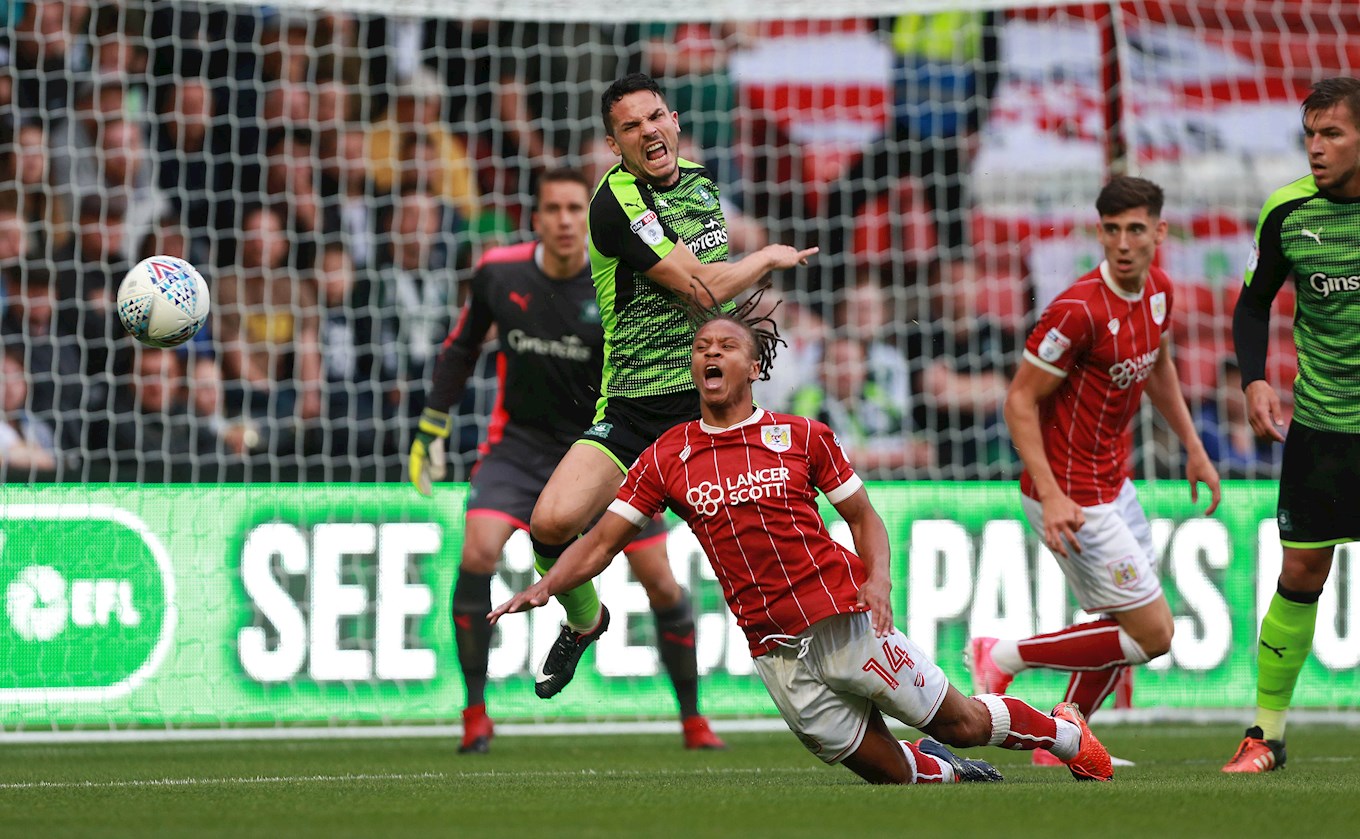 FOR the ninth time in the last ten seasons, Argyle found the opening hurdle of the Carabao Cup too difficult to overcome, leaving Ashton Gate well beaten by rampant Championship opponents.

The Pilgrims arrived in hope, having progressed up a division and strengthened accordingly since going out of the competition a year previously in a close contest against another side from the second tier, Reading.

However, that hope had evaporated before a quarter of the game had ticked past by which time a relentless Bristol City had scored three times. The opening pair came from their centre-backs, Jens Hegeler and Nathan Baker, with captain Korey Smith adding a sublime third.

Youngster Freddie Hinds then became the first forward to put his name on the scoresheet with a debut goal to remember five minutes before half-time.

A little tinkering with personnel and formation at the interval ensured Argyle’s second half was an improvement on the first but City scored again in the dying stages through substitute Jamie Paterson to hand Derek Adams his heaviest defeat as Argyle manager.

Between them, the two sides had made 15 changes from their starting 11s of the previous Saturday, with Argyle transplanting their entire bench at Peterborough into the team – including goalscorer in the 2-1 defeat, Gregg Wylde – as well as bringing defender Jakub Sokolik and forward Nathan Blissett into the fold.

Blissett replaced Ryan Taylor, who was injured 20 minutes into the new season at the ABAX and who was absent from the party, along with midfielder Jamie Ness and the squad’s three first-year professionals.

With Luke McCormick among the seven seasonal starters swapped on to the bench, the side was captained by Graham Carey, one of only two players to be two-for-two for Argyle starts this season, along with Sonny Bradley.

The home side made a relatively few six changes from the one that chalked up a home Championship victory against Barnsley on the opening day, but still managed to find room for three-time former Home Park loanee Bobby Reid.

Argyle had fallen behind at Peterborough within five minutes; it took less than half that time to go behind at Ashton Gate, German defender Hegeler firing home after 100 seconds of more or less continual home-side pressure.

The early strike buoyed the already bobbing Robins, much of whose moves went through the lively Reid. Bobby Dazzler obviously learned a thing or two in his time at Home Park, and only a terrific smother tackle from Bradley prevented him scoring against his former side.

If City’s first two goals had owed more than a little to Argyle’s inefficiencies, their third, in the 20th minute, bore the mark of a craftsman, Smith exquisitely bending a shot from the edge of the penalty box around the Pilgrims’ shellshocked Dutch custodian. It was proving some welcome to the EFL.

Argyle stuck out their collective chin and regrouped, inching their way into the game, playing for pride, if nothing else. For nearly 20 minutes, the storm of the opening quarter of the game was forgotten as the Pilgrims gave as good as they got, with Yann Songo’o’s looping header extending City goalkeeper Frank Fielding.

Maybe that rocked the home side out of complacency because they scored in their very next attack with another picture-book goal, this time form debutant striker Freddie Hinds. The former Luton youngster struck with power and precision from 25 yards, leaving te Loeke grasping fresh air.

Adams changed the Pilgrims’ shape at the half-time interval, withdrawing wide midfielders Lionel Ainsworth and Gregg Wylde in favour of Antoni Sarcevic and Oscar Threlkeld, and switching to a three-man central defence.

The remedy had the desired effect, although, of course, the game was a long way beyond retrieval. Adams will have been looking for a reaction from his players, and he got one. The Green Army, somehow more impressive than ever in adversity, sung seagulls, Supertramp and standing if you loved the Greens, which they proved that they undoubtedly do.

Threlkeld hobbled back off as the game limped into its final quarter which, in the greater scheme of things, is potentially more troubling than going out of a competition with whose later stages they are unfamiliar.

Te Loeke’s harsh baptism in English football was added to when he was beaten from outside the penalty area for the third time in succession, Paterson clipping the ball over his head, before referee Oliver Langford brought proceedings to a merciful conclusion.