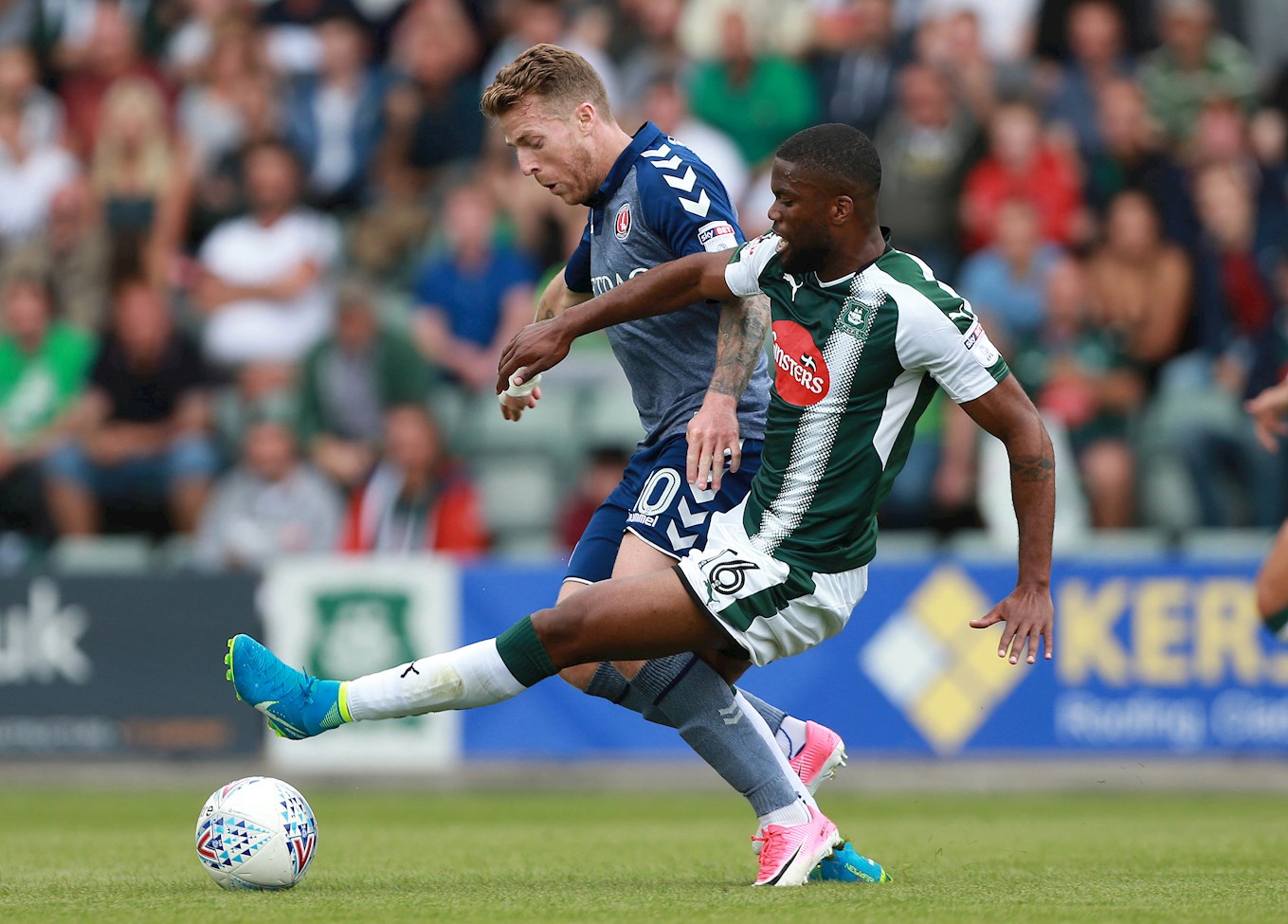 THE return of Sky Bet League One football to Home Park was celebrated in doubly exuberant style by Jake Jervis, on his 101st appearance as a Pilgrim.

In his first century of games, Jervis had notched 27 goals. He began life after 100 with a second-half brace to earn Argyle their first points of the season.

Jervis flicked home close range early in the second period, before breaking clear in the closing minutes to seal a hard-earned victory.

Derek Adams was forced to make two changes to the previous, opening Sky Bet League One game encounter, a 2-1 defeat at Peterborough, because of two injuries.

One, sustained in that Posh loss, was to Ryan Taylor, and the other, picked up in a 5-0 reverse at Bristol City in the Carabao Cup on Tuesday, was to Oscar Threlkeld. Replacing the pair for this game were Gary Miller, for Threlkeld at right-back, and Blissett as the central striker, for Taylor.

Argyle, with losses in both competitions thus far, were facing a Charlton side undertaking a mini-league against Westcountry sides, but enjoying it thus far. A league win against Bristol Rovers at the Valley was followed by a cup win at Exeter City. Now the Addicks headed a touch further west at attempt to make it a three-in-three start, as far as wins were concerned.

There was the chance of unwanted trifecta, too. Athletic would head to Home Park without Lee Novak, sent off for serious foul play in Charlton’s first game, and Andrew Crofts, who saw red at St James Park.

Argyle made a fiercely bright start, firing a ball across Charlton’s six-yard area while some in the Grandstand were still softly blowing the warm steam away from their hot beverages. The visitors, with plenty of credible threats even without their missing men, got the ball to Northern Irish international forward Josh Magennis, who worked an opening and shot low, but found only Luke McCormick’s outstretched boot. It would not be the last time Magennis would be frustrated by the Argyle captain.

Before then, Antoni Sarcevic nearly caused Charlton goalie Ben Amos, once of Manchester United, to turn his face as red as many of the jerseys in the Barn Park stand behind him. Amos’ kick struck Sarcevic from close range, but fortunately for Amos, the deflection from the Argyle midfielder was more akin to a glance over the slips. Had it been straight back down the ground, the Pilgrims would have led.

Argyle then worked a couple of chances to Blissett, before they had a pair of defensive heroes to thank. First McCormick, saving well from Billy Clarke’s shot, then miraculously stopping Magennis’ follow-up.

When McCormick was beaten, Ryan Edwards was the saviour, getting behind his keeper to head over when Jake Forster-Caskey’s effort was goalbound.

Graham Carey, quiet to this point, then got involved in his usual style. An initial shot was blocked by a defensive, retreating hand, giving Argyle a direct free-kick that the Irishman curled over the bar.

Minutes later, Carey was down the left and sending over a dangerous cross that Blissett and Jake Jervis each stretched for, but could not quite convert.

Gary Miller went into the book on 35 minutes, but his caution seemed a little curious. Ricky Holmes had clearly flicked the ball past Miller with no little skill, but rather than dart around Miller, the winger deviated about 45 degrees to deliberately run into the right-back. Conned, the referee bought it, and booked the Scotsman.

Magennis would see another header foiled and Holmes a flicked free-kick caught as Charlton went into the interval probably feeling they had edged it – but Argyle were far from out of the game. A stunning ball from David Fox found Gary Sawyer, whose early cross caused mass panic in the Charlton ranks, and the on-a-caution Miller headed not far over.

A little over eight minutes into the second half, Argyle had made Charlton pay for any perceived profligacy.

Edwards, catching the eye on his true Home Park bow, broke up play, then pinged a perfectly weighted ball towards Jervis on the right flank. Jervis did enough to win a corner, which allowed the Edwards/Jervis axis to come into force again.

Carey hung a corner up towards the far post, where Edwards powerfully headed down into a crowded six-yard box. Jervis, back to goal, helped the ball on with the outside of his right boot, and it slithered into the net in front of a jubilant Devonport End.

There followed a rather restless period of the game, with Charlton perhaps feeling a little aggrieved at being behind in a game they may have felt they had been on top of, and Argyle being on the end of one or two questionable decisions. Niggle tended to prevail over substance, but with Argyle in front, perhaps a breaking up of the rhythm suited the home side.

Charlton brought on Karlan Ahearne-Grant not long after the hour mark and shuffled their pack of supporting attackers, but produced nothing like the chances they had in the first period.

At the other end, Carey launched a 25-yard hit that had Amos beaten all ends up, but flew agonisingly wide of the post.

Charlton threw a second die – Reeco Hackett for Tarique Fosu – while Adams replaced an ailing Blissett with Ruben Lameiras, asked to play as an auxiliary striker, as he had in the second half at Peterborough seven days earlier.

Before either sub had produced an effect on the game, a familiar battle: McCormick v Magennis. This time the Charlton forward found space in the area to latch onto a curling cross, but was unable to put much power into an effort, and so McCormick won out again.

As the games match sponsors, ITEC, were choosing the Argyle goalkeeper as their man of the match, Luke continued to prove them right. He pushed round a tricky dipping effort from Ahearne-Grant, before punching away a cross under serious pressure. It was a clean sheet truly earned.

In the end, a Jervis coup de grace spare a familiar panic over the closing minutes. Breaking away from a Charlton attack, Jervis outstripped all bar one defender, as well as his own team-mates. Approaching the area he shot low to Amos’s right, and the goalkeeper found the effort too hot to handle.

There was a final, happy note. Jervis left the field to a huge standing ovastion, as Jamie Ness came on for his Argyle debut. The Scottish midfielder had not even notched a minute of any pre-season friendlies, so it was good to see him take to the field.

He ran on to a cheer. Seven seconds later, the final whistle sounded. Played, Jamie.

And played, everyone else. League One – we’re back.