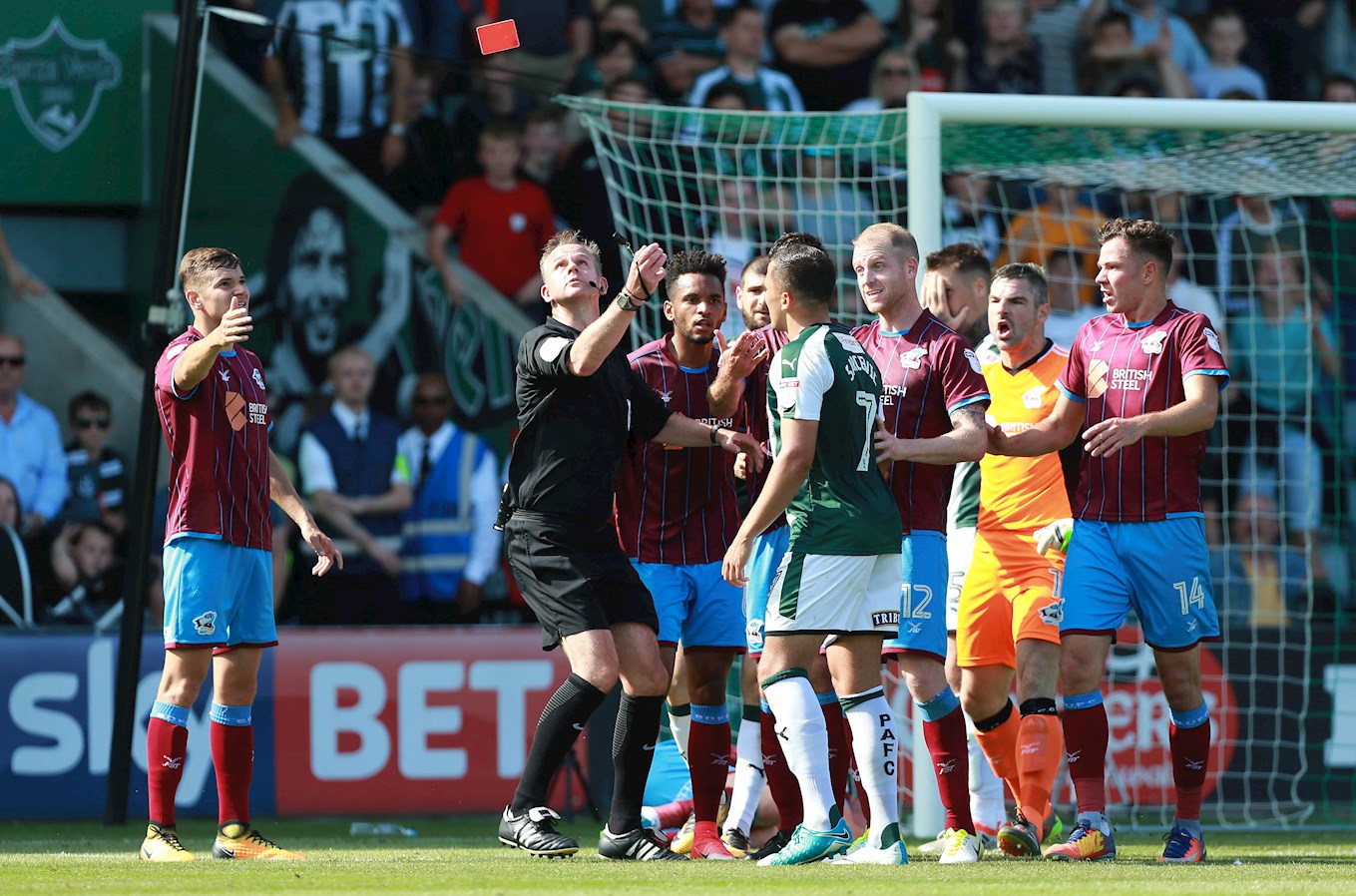 THERE are games of football in which simply looking at a scoreline does not give you the full story.

Plymouth Argyle will scarcely have played better at Home Park in games they have lost by four goals than they did against Scunthorpe United, who maintained an unbeaten start to the 2017-18 Sky Bet League One season.

That is not to demean the Iron, who quite simply took a chance in the first half, where Argyle did not, to go in at the break ahead via Paddy Madden's goal.

In first-half stoppage time, though, although wound-up by Madden, Antoni Sarcevic did the kind of thing that he would he will have regretted mere seconds later, in pushing his head towards Madden's, and thus getting himself sent off.

Argyle had played some attractive, expansive and threatening football all half, and trailed distinctly against the run of play. An 11 v 11 second half, one felt, would surely have yielded an equaliser.

Even a man disadvantaged, Argyle continued to dominate. However, an inability to convert pressure into goals, coupled with an understandable level of fatigue, saw Scunthorpe increase their lead through Madden, Tom Hopper, and Josh Morris cruise away easy winners.

Before the game, two arrivals, representing different halves of the Glasgow Auld Firm, into the Argyle side were both eyecatching.

Nadir Ciftci, an arrival from Celtic on Monday, went straight into the side as Argyle pivot front man, at the expense of Nathan Blissett, who was frankly a little hard done by, having played well at Southend the week before.

Jamie Ness, spotted by Derek Adams' father George and recruited for Rangers' academy many years ago, arrived at Argyle in June, but found his own journey to the first team a little more lined with obstacles. Eventually, having fought off injury, he made what in some ways was his third debut. First there was a 13-second cameo, against Charlton, which barely counts, and then there was a 60-minute appearance in the Checaktrade Trophy, which is one thing - but it is not Sky Bet League One.

With one of those quirks that football has a habit of turning out, Ness would make his League One bow against Scunthorpe, for whom he made nearly 50 appearnces for over the past two seasons.

In another quirk, albeit a slightly less cheerful one, it was Joel Grant, on his 30th birthday, who made way for Ness to step in.

Jamie's inclusion meant a mini reshuffle; Graham Carey played to the right and left of Ciftci, respectively, in what resembled more a front three for Argyle. David Fox played as the deepest of a midfield trio, with Sarcevic and Ness a little further on.

Argyle started very brightly, playing controlling, slick football on the sumptuous Home Park turf, although the best they got for their opening endeavours was a Fox shot that never tested Matt Gilks in the Iron's goal. Scunthorpe, in a rare early foray, caused the first palpation of the game, when Hakeeb Adelakun's teasing centre looked on a plate to be knocked in, only for Gary Miller to cover round superbly to get the ball away.

The Greens' football continued to be a delight. Early signs were that Argyle's extra man in midfield tended to leave Fox in space, and his intelligence on the ball was key to trying to unpick United. When Carey began to drift infield from the right, Scunthorpe did not know who to pick up, and when they left the Irishman alone, he nearly punished them. Finding himself in the inside-left channel, Carey smashed a low cross which Rory McArdle had to be sharp to turn behind. From the resultant corner, Ryan Edwards mis-hit a shot after a poor headed clearance by the visitors.

Argyle kept up the pressure. Carey burst down the right flank and chipped a cross that missed everyone, but was picked up by Jervis. He set up Gary Sawyer to cross, first time, to where Ciftci met the ball with a fine header. It took an excellent Gilks save to prevent the Turkish debutant his ideal start.

Carey, getting involved again on the left, to Scunthorpe's bemusement, bought himself a free-kick after going on a jinking run, concluding in a nutmeg and a trip. A free-kick led to a corner, from which Sonny Bradley brought down the ball, paused to let a blocking defender go by, then shot, only to see the effort charged down.

Of course, after such a stunning opening 25 minutes, football did its 'you think you know me' routine, and Scunthorpe scored.

It was a classic breakaway goal that gave the Iron the goal that flattened Argyle. Adelakun, after showing glimpses of vision that his team-mates were not typically up to speed with, found Morris on the left flank. Morris crossed low to find Madden, who looked to have fluffed his chance when firing over Luke McCormick, but hitting the bar. The rebound, though, fell kindly, and Madden nodded over the line to give Scunthorpe a lead from way out of the blue.

Scunthorpe had been - shall we say - taking their time with matters even at 0-0, so this was bound to increase once they had an opener. It did, with Gilks getting a warning to speed things up.

After a disjointed five minutes, coming to terms with the body-blow, Argyle began to shake off the daze and get back to their easy-on-the-eye football. Ness showed good vision to find Sawyer bursting down the left, and the full-back showed even more determination to win a battle and head for goal. His low cross was flicked towards goal by Jervis, but saved by Gilks.

At the other, Scunthorpe sounded a stern warning that Argyle could not expect to walk back into this game. Morris ran infield, opening space for Conor Townsend's overlap. His shot from 20 yards was safely over the bar, but it reminded the Pilgrims that a false move at the back could lead to a second goal Argyle would find it nigh-on impossible to fight back from.

From another free-kick, Argyle almost got a freak equaliser. Bradley's header down looked beyond Ness, whose slide into a tackle won the ball and sent it spinning goalwards. In the end, the intended block turned into a shot which went only centimetres wide.

In first half injury-time the trio of Sawyer, Ness and Jervis linked up, not for the first time, leading in Jervis' low shot being well held by Gilks.

Some excellent work by Bradley won Argyle a free-kick in a dangerous position, and it looked like a chance for a grandstand end to the first period, perhaps in the form of an equaliser. Instead, the game suddenly took a huge, self-inflicted lurch away from Argyle.

As Jervis waited to take a free-kick, attention was taken by Madden and Sarcevic having a face-to-face argument. It looked as though the matter had been calmed, but Madden advanced on Sarcevic once again, with the latter prodding his head towards the Iron's goalscorer. The reaction by Madden was comically theatrical, but Sarcevic had undoubtedly made a butting motion, regardless of contact. He was sent off, with Madden cautioned for his part in proceedings.

If Madden had hardly endeared himself to the Devonport end in the first half, he nearly doubled down on that within the first minute of the second period. Sneaking in behind Bradley, Madden got a shot on goal, but found only McCormick, standing strong.

To their enormous credit, Argyle continued to look to the pass the ball, and after a long, patient build-up, came close to finding their leveller. It took three pieces of very fine skill and vision from Carey, complete with input from Miller and Fox, to slide in Jervis, who was only foiled by a splendid piece of last-ditch defending by McArdle.

Carey was playing ludicrously well, even for him, and he skipped between two players, who had to haul him down, right on the edge of the area. Funjo Ojo was cautioned for the foul - Scunthorpe's fifth booking to that point - and Carey struck the free-kick low and true, but saw it kicked away.

It was difficult to tell, much of the time, that Argyle were a man down, but it told whenever Scunthorpe could get forward. Ojo was the man over from one break, and his swerving shot left McCormick rooted, but flew just over.

From their next attack, the Iron made their numerical advantage count. Substitute Duane Holmes' cross was headed in by Madden, who stooped well to direct the ball beyond McCormick's despairing clutches.

Argyle sent on Nathan Blissett for Jervis - a substitute that was going to happen anyway - and created a chance where Ness headed straight Gilks. However, Argyle looked a little like a team that had run their race. It was forgivable. To have played at such a high tempo, then been reduced to ten men, sapped the energy of even an uber-fit Derek Adams side.

Morris came awfully close to making it 3-0 for Scunthorpe, and was stopped only by an excellent McCormick save. Morris was, though, instrumental when the Iron did make it three, sliding a gorgeous pass to Tom Hopper, who flicked home via the far post.

But for some profligacy, some luck, and some excellent defending and goalkeeping, Scunthorpe would have added several more to their lead. In the end, the excellent Morris fired home to make it four, and give Scunthorpe fans the bigger Bank Holiday smile.

For Argyle, no points, but plenty of heart from strong first performances by Ness and Ciftci, as well the knowledge that, with level sides, Argyle could do damage to some of the division's better sides.

For the Green Army, a weekend of explanations. "Seriously, I know it was 4-0, but we were not that bad..."