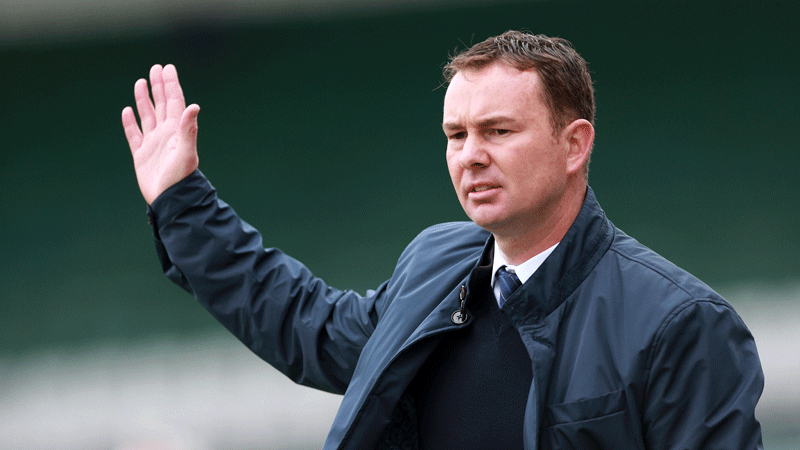 ARGYLE manager Derek Adams remains committed to finding a replacement for injured forward Ryan Taylor but will not risk the club’s financial stability in his pursuit.

Derek has built two Argyle squads for minimal outlay in his short time in charge at Home Park and that pragmatic approach will not be compromised even though the Pilgrims’ contemporaries are prepared to shell out eye-watering sums.

Saturday’s Sky Bet League One opponents Charlton Athletic, for instance, have recently been linked with a £1.5m move for Stevenage goalscorer Matt Godden.

“You have got to remember where this football club is and where it’s come from – we are not in a position to pay large transfer fees for players. The supporters have got to understand that. They have seen their club be in the depths of administration and you can’t quickly turn that around.

“It has been in a difficult place, but it is now in a very good place and we are moving along nicely – we don’t need outside pressures to spend money that we don’t have.

“The supporters that have followed us for so many years are happy with the progress that the football club is making, without being a club that goes bust. That’s something no-one wants to see.

“Income needs to be generated. We did pay compensation – very small as it is – for Nathan Blissett and Ryan Edwards. The football club has to be on a sure footing. We are trying to build a new stand, which the finances are there for but we are not in a situation where we can go out and spend six figures for a striker. That will maybe come in the years to come.”

The loan market remains Derek’s main option. In the meantime, he is content that Blissett and Jake Jervis will continue to give him what he needs.

He said: “We’ve got the two of them vying for that position until we take another striker in. They have played there and scored goals; it gives them that opportunity.

“Nathan scored a good number of goals when he was with Torquay and was able to put a run together. It gives the two of them the opportunity to try to vie for the striking berth that we have.

“He has to take the ball in; he has to link the play up. He’s more than capable of doing that; he’s got a very good presence; he’s quick; he’s strong; he’s excellent in the air. The other night, against Bristol City, he gave their back four – when we did have possession of the ball – some problems.

“In pre-season, Jake has played in that role up front a good number of times, and did very well at it.”

The other forward in the first-team squad is first-year professional Alex Fletcher, whose time may well come but is not yet.

“Alex is training with the first team and he’ll play on Friday night in the Peninsula League game,” said Derek.

”It gives him an opportunity. He’s featured in some of the pre-season games, which has been a good experience for him; it’s up to him, now, to push on.”