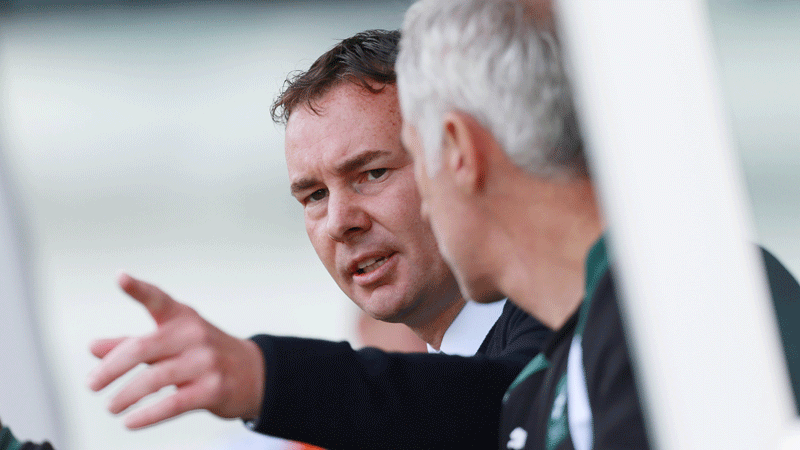 ON the eve of the new Sky Bet EFL season, Argyle manager Derek Adams is more than happy to open himself up to the utmost scrutiny and would like his fellow bosses to have the same.

Argyle begin life back in League One for the first time in seven seasons at Peterborough United on Saturday, having won promotion more than three months earlier, with the task of maintaining the momentum they have enjoyed since Derek’s appointment in June 2015 becoming proportionately harder.

Derek said: “It’s a big step and everybody knows that the competition in League One is improving.

“The teams that have been relegated from the Championship are all excellent – we’ve obviously got Blackburn in there who, not long ago, were playing in the Premier League – and the teams that have come up from League Two have all done very well; the standard of opposition is certainly improving.

“There are going to be a good number of teams that will be strong in this division; I think you could go into double-figures.”

The strength of some sides will be down to financial muscle, with at least one of last season’s Championship sides rumoured to have a bigger playing budget for this campaign than they did last.

Derek would be pleased if those types of rumour were substantiated.

“At the start of any season, we should have it out in the open what managers have to spend, cheque-book wise,” he said.

“I’m quite happy to have that, as a manager, because I know the constraints I work under and I know the benefits some other managers get.

“That would then show the good coaches, the good managers, from the rest, just to give an idea to the football fan how their club is spending the money.”

In a week when one footballer agreed a contract that will see him earn more in a week than Argyle pay their entire first-team squad in a year, Derek is not about to risk the Pilgrims’ prudence since they nearly spent their way into oblivion in 2011.

“Financially, the chairman and the board of directors have put the club in a very healthy position, being able to break even and move into profit,” he said.

“That is not easy in this game because, if you look at the clubs with benefactors who are spending money they don’t have, it becomes a challenging operation for any club chairman.

“The game has gone ludicrously mad at the top end and it filters its way down to the bottom end eventually. I do think there should be a bit more clarity in the public domain.”