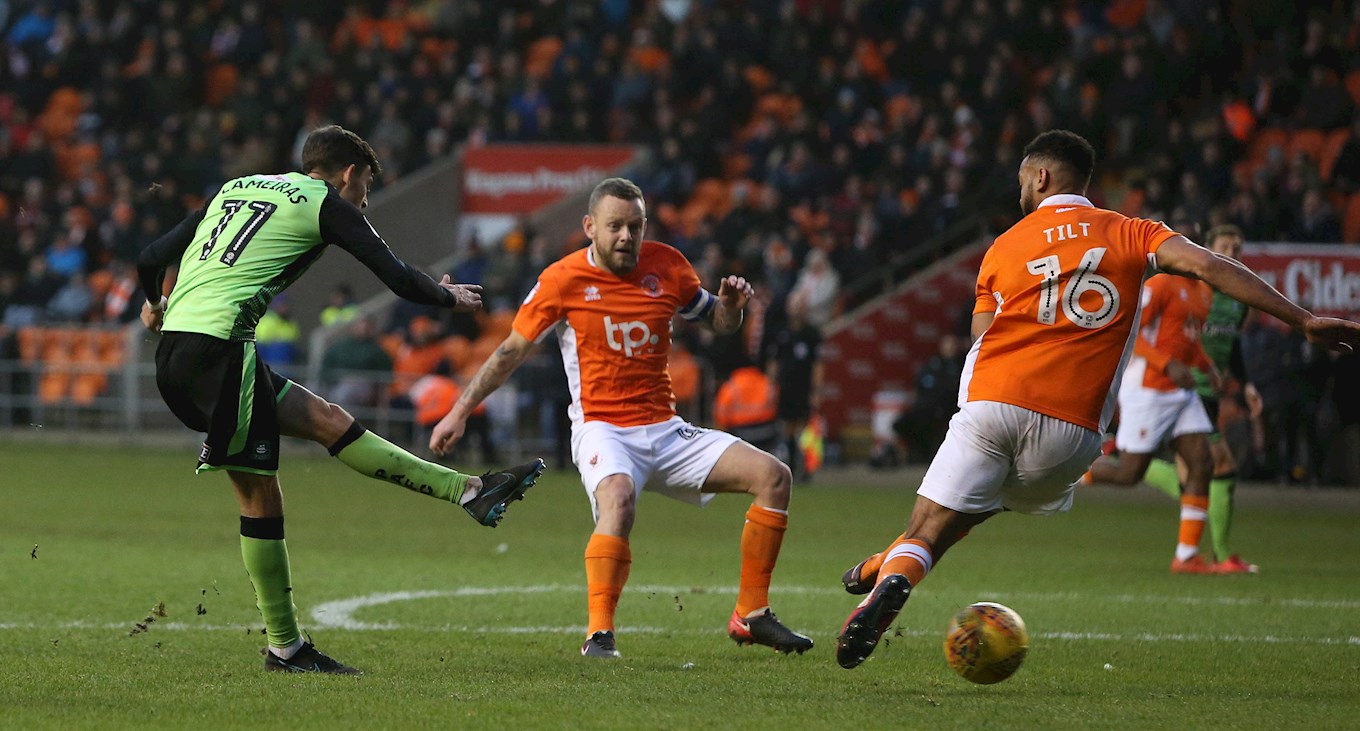 Match report for Blackpool vs Plymouth Argyle on 30 Dec 17

ARGYLE suffered late heartache for the second time in three away games as Blackpool snatched an injury-time equalizer to undermine a towering – there, I said it –  defensive display by the Pilgrims.

A quite remarkable goal from Graham Carey – even by his standards – in time added on to the end of the first half, after Ruben Lameiras had opened the scoring six minutes earlier, put the Pilgrims in control of affairs.

They were pegged back straight after the interval, when Colin Daniel fired the home side back into contention and held on to their slim lead all the way to the final minute of time  added on, when substitute Viv Solomon-Otabor scored.

With the Pilgrims boasting two wins either side of Christmas Day going into their last match of a memorable year, Argyle manager Derek Adams saw no reason to change his outfield ten for a third game in eight day

There was one old/new name on the team sheet, however, and it was nominally, having last appeared for the Pilgrims in a 1-0 defeat at Portsmouth a month earlier that was painful for him in more ways than one.

He blotted a rather impressive copybook that had seen him keep four clean sheets in six previous games, four of which were won and another drawn, with a keeper blooper that led to Pompey’s only goal of the game. Later in the game, he was munched in a brave challenge with scorer Kal Naismith. Such was the coming together that Naismith still has not recovered.

Blackpool, like Pompey, another of the teams promoted with Argyle in 2017, came into the match without a win in their previous six Sky Bet League One matches and not having won at an always poorly attended Bloomfield Road since mid October.

Former Pilgrim Kelvin Mellor, who has scored 11 goals since departing Home Park in the summer of 2016, was included in their line-up which showed two changes to the starting side that had lost 3-2 at home to Scunthorpe United on Boxing Day; Andy Taylor and Jay Spearing came in for Jimmy Ryan and Nathan Delfouneso as the Seasiders switched to a 4-5-1, with Armand Gnanduillet the lone target man.

Matthews was eased back into the ranks, with Blackpool failing to test him until the first 15 minutes of an interesting, but uneventful, match had passed. Even then, Sean Longstaff’s long-range attempt was easy meat to the man from mustard country.

Blackpool had to rearrange midway through the first half when Taylor limped off. His replacement, Birmingham City loan player Solomon-Otabor immediately announced his return to the side after being left out of the Boxing Day squad for disciplinary reasons by firing a shot just wide of Matthews’ far post.

The home side’s game was built on a high press, designed to deny Argyle’s potentially influential midfielders time on the ball and it was not without a measure of success, if success can be measured by the paucity of shots with which home goalkeeper Ben Williams had to deal.

However, the Pilgrims have recently discovered a way of ‘getting there’ when faced with various situations, and they found their way past six minute before the interval.

The assist came, as so many have in 2017, from Graham Carey, who seized on Oscar Threlkeld’s throw-in on the right-hand side and drove towards the box in front of the Green Army. He off-loaded to Lamieras, who tucked a sweet low left-foot shot past Williams from 15 yards.

The cheers of ‘Roo-ben, Roo-ben’, not heard since the departure of Reuben Reid, soon gave way to the Graham Carey Song and it was not long before that was given full throat after a quite stupendous goal from a man who has been known to notch a few worldys in his day.

When Ryan Taylor flicked on Sonny Bradley’s ball from deep to Careywide on the left, thetre seemed little danger. The Irishman had other ideas, of course, and sent a dipping, first-time shot over the head of Williams and into the goal.

Blackpool needed to show something quickly in the second half and, shortly after the interval. Matthews was called upon to make the first real save of his second coming, diving low to keep out another Longstaff drive.

The Seasiders’ kept up their attacking tide and crashed through the Pilgrims’ defensive wall in the 56th minute, when Daniel picked up the scraps following a corner and drove the ball all along the ground through a crowded penalty area.

Argyle sent of Grant for Lameiras to shore things up, and the former Crewe and Yeovil man nearly restored the two-goal advantage with a shot that went wide after being sweetly set up by former Blackpool player David Fox.

Although the underlying momentum was very much with Blackpool, the Pilgrims were not content to merely sit back and soak things up. How they did not score their third when Taylor wriggled free on the bye-line and found Fox coming in at the far post is a mystery. Fox met the ball perfectly and the ball appeared destined for the net, only to hit the post. We will say that the wind took it.

Argyle were largely playing from their own half, though, and had to show to their bodies-on-the-line character. Bradley stuck a head on a fierce drive from substitute Dolly Menga that was bound for goal, and likely to take the net out, and Songo’o simply flung himself in front of Danny Philliskirk’s shot. There were many other heroics as the home side threw in the set-pieces.

Just when it looked like attitude and determination would take Argyle all the way, Blackpool hoisted the ball into the penalty area once more and Solomon-Otabor tucked away the last-gasp equaliser.