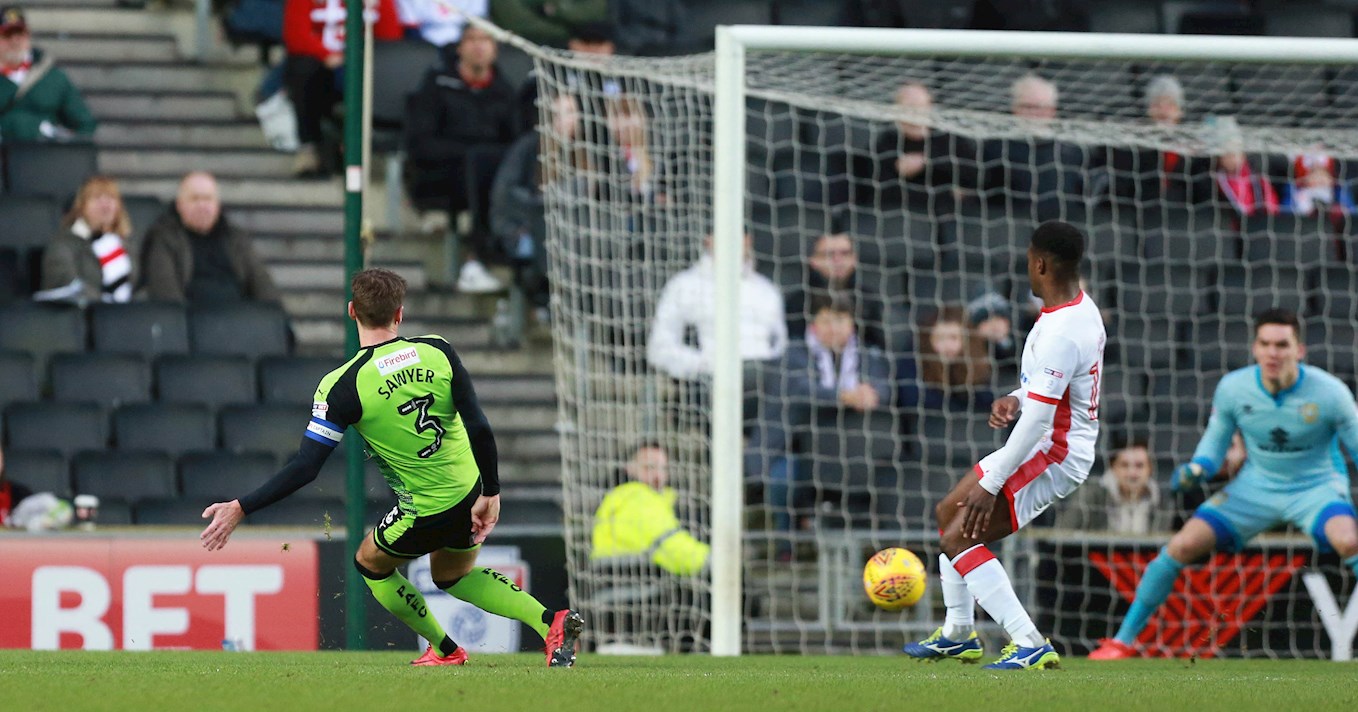 DO not ever moan about repeats in the Christmas schedule again.

Eight years after a classic episode in Argyle's history played out in Cardiff, an encore performance was shown in Milton Keynes.

Gary Sawyer's previous goal for Argyle was at Cardiff City Stadium, on December 26, 2009, in a 1-0 win. Forget Del Boy making his millions and the Vicar of Dibley eating four Christmas dinners - this is our kind of classic we could watch over and again.

Sawyer's precise finish gave Argyle a 16th-minute lead during a first half they controlled, and the second half became a familiar story of commited defending, blocking MK attacks and looking for a cheeky second. They did not get it, but then they did not need it.

Argyle's team was the same cast of characters, too. The identical 11 that started the 4-1 win over Oldham took to the field, with only Antoni Sarcevic replacing Cameron Sangster on the understudies' bench.

Speculation was rife in the MK ranks before the game that their side may play with three central defenders, given that the teamsheet indicated just three defenders in the line-up. To the non-MK enthuiast that seemed unlikely given a) they had not played that way all season and b) Argyle's first-half dismantling of a team playing 3-5-2 three days earlier.

The opening exchanges were fairly even, in accordance with the time of the season, but December 26's usual moniker was not particularly apt. On this Boxing Day, opposition boxes were an alien place for each team.

After a goalless quarter of an hour, Milton Keynes' best chances had come from high long-range efforts from Chuks Aneke and Alex Gilbey, while Argyles most notable effort was a stinging David Fox drive that looked on target, but was charged down.

Getting into the box, though, is all about timing. Timing to present yourself unmarked, but also to tell one of those little stories that football seems to present so readily.

It was on Boxing Day 2009 when Gary Sawyer last scored for Plymouth Argyle, appearing beyond the purvue of Cardiff City's defence to grab the only goal of the game.

Eight years - and 109 Argyle appearances - later, here came Sawyer, ghosting beyond the final line of MK resistance and presenting himself as the perfect option for Ruben Lameiras, on the ball on the edge of the area. Lameiras' pass was nicely placed, and Sawyer's guided finish into the bottom corner could hardly have been more perfect.

The Green Army greeted the goal, in their splendid isolation in one hemisphere of the ground, declaring themselves, on this cold December day, to be walking in a Sawyer, not a winter, Wonderland.

In Milton Keynes, where the concrete cows were last seen chatting to the brass monkeys about the climate, it was the winter of discontent. With just one win in 11 games, the home faithful scattered across this beautifully-appointed but sparsely-populated ground, were already restless, and the Argyle opener did little to offer festive succour.

The Pilgrims limited MK to fleeting efforts from Aneke and Osman Sow, who both threatened to show menace on occasion, but seemed to lack the confidence to provide a cutting edge.

For Argyle, Graham Carey forced a tidy save from Lee Nicholls, and the Irishman also flicked in a gorgeous free-kick begging to be finished, but that went past the post, untouched.

With Lameiras looking willing to work hard, and showing no little threat, Argyle looked like they had the drive that Dons seemed to lack. The game, though, seemed to be quite narrow, and MK managed to smuggle the ball away on the occasions Argyle pressed.

Before the players had left the field at the half-time break, John and Yoko on the PA cut through the boos that met the whistle. "So this is Christmas," said Lennon. "And what have you done." One could symptathise with MK fans echoing the sentiment.

Seven minutes into the second half, there was heartstopping moment where "What have you done?" might have been spoken in a different intonation.

Gboly Ariyibi crossed from the right with a low fizzer, where Ryan Edwards was waiting to meet it to clear for Argyle. He miscued badly, sending the ball goalwards, but straight into the waiting arms of Kelle Roos. One feels that the incident seemed in keeping with each team's luck as it stands. You feel that 15 games ago a slice in the top corner would have gone perfectly with red cards, deflections and injuries.

The game itself was turning a little niggly. Every tackle seemed to yield calls for a foul; every foul a question over whether it was a booking. Carey and Taylor seemed particularly most hard done by in these stakes, with referee John Busby generally unsympathetic to their claims.

Ethan Ebanks-Landell, MK's towering on-loan defender, got forward for a set-piece and found the ball at his feet. It took some trademark Argyle en-bloc defending to keep him out, and then do similar for an Aneke effort a few minutes later.

There were, by this point, 20 minutes remaining, and MK boss Robbie Neilson signalled it by bringing off Sow and Conor McGrandles, and bringing on Ousseynou Cosse and Ed Upson.

Within two minutes, though, it looked like Dons were delivering a surprise late present to the Pilgrims. Goalkeeper Lee Nicholls tried to start a move on the floor, from the back, and left his pass woefully short. Lameiras pinched it, squared to Taylor, but the flame-haired forward sliced wide.

With ten minutes to go, Argyle brought on the legs of Jake Jervis for the luckless Carey, and almost found their way through immediately as Lameiras jinked in to the area again, only for his cut back to be cut out.

Dons raced down the other end and saw Pawlett's strong drive blocked well by Sonny Bradley as the game began to open up.

The pattern was repeated. Lameiras and Jervis failed to pick their way through, and MK broke at pace, only to be foiled by Ariyibi being naively caught offside.

Argyle breakaways were looking as likely to lead to a second as was an equaliser to come, and it was quite the relief when Argyle saw out the three minutes of injury time mostly in control.

Mostly. Kieran Agard did nip behind the Argyle defence to try to reach a low cross, but Roos got there first, and Agard probably would have been offside anyway.

Blackpool next for festive hat-trick of wins. We have had worse weeks, Rodders.