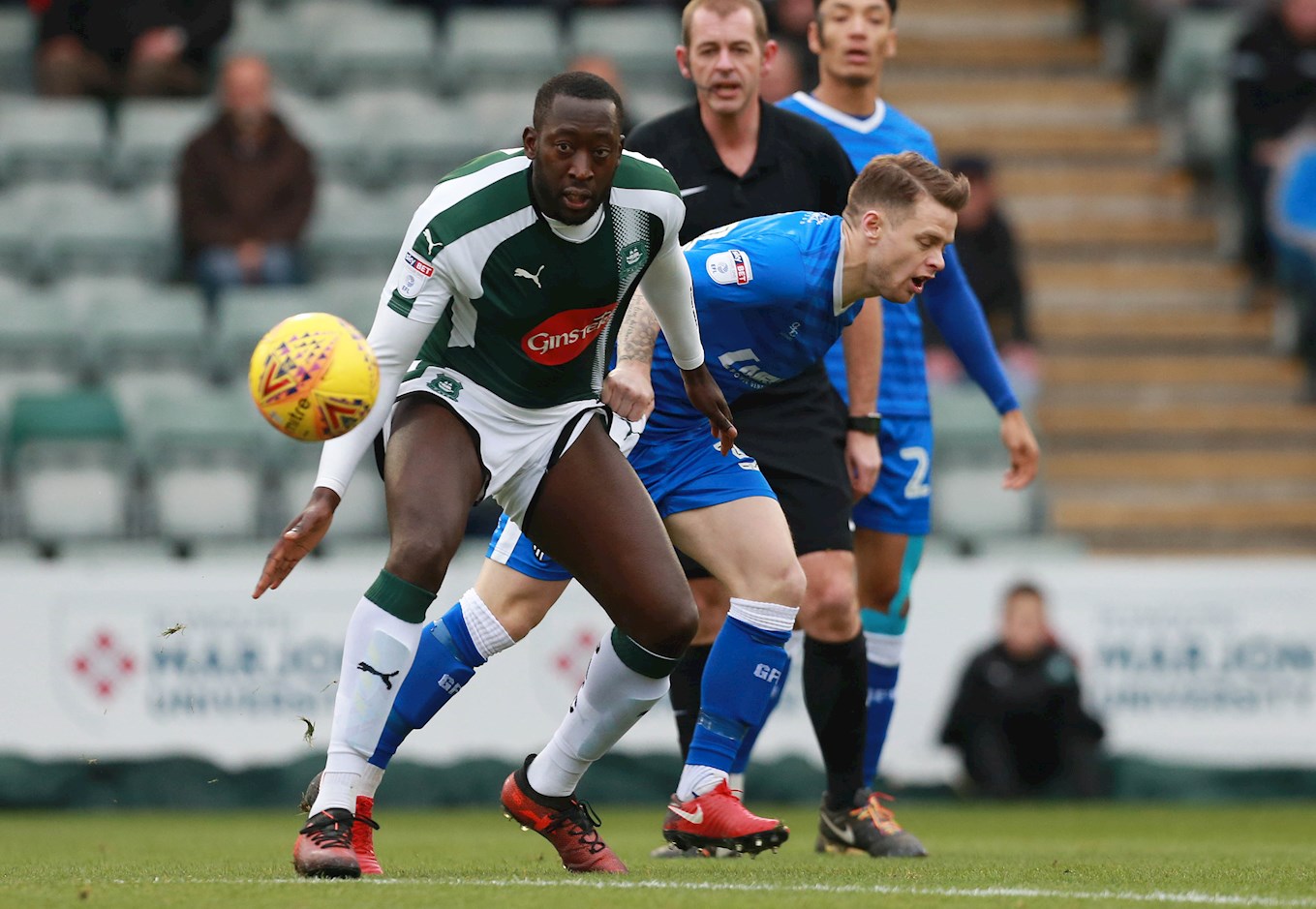 Match report for Plymouth Argyle vs Gillingham on 09 Dec 17

TOUMANI Diagouraga timed his first Argyle goal to perfection, netting a last-minute winner to lift the Pilgrims off the bottom of Sky Bet League One.

Toums, as he is – thankfully – known by everyone, slotted home in front of the Devonport end after the Pilgrims, who took the lead through Joel Grant early in the second half, looked like they might have to settled for a share of the spoils after conceding an 84th-minute equaliser to Tom Eaves.

For a team that has suffered from its share of questionable refereeing decisions this season,  Argyle were possibly beneficiaries on this occasion.

Gillingham, and possibly the non-partisan observer, will tell you they had taken the lead in the first half, when the Pilgrims latest goalkeeper, Kelle Roos spilled a shot from Eaves that appeared to cross the goal-line only for the officials to wave away claims for a goal.

Eaves had a measure of revenge six minutes from time when Argyle failed to deal with a Gills free-kick and no referee could chalk off his fine finish.

Argyle had been obliged to make their now traditional match-day goalkeeping change, with Dutchman Roos, on emergency loan from Derby County, replacing Luke McCormick and becoming the fourth custodian to be used in the last four matches, across three competitions.

Roos was, remarkably, the seventh Pilgrim to be given a first-team stint between the posts this crazy season, with an eighth – 16-year-old Max Childs – also having done duty on the bench.

Goalkeepers might not have been in short supply at Home Park, but goalscorers have been a little thin on the ground, so it was good to see Ryan Taylor back leading the league line for the first time since he broke an ankle at Peterborough before the season was half an hour old.

Yann Songo’o was the unlucky make-way from the previous week’s unmerited 3-1 Emirates FA Cup defeat at Bradford City, the victim of some reshuffling that saw Jake Jervis repositioned on the right of the three-man attack and Graham Carey take up residence on the right of a midfield trio anchored by Diagouraga.

After Roos had dealt competently enough with two corners, Taylor was prominent in the early stages, but not as eye-catching as Grant. The former Crewe man ran past and through the Gills’ back line without being able to find a totally telling shot or cross.

It has not been a good couple of weeks for the Pilgrims’ ‘keepers, with Remi Matthews and McCormick having both committed uncharacteristic goal-costing gaffes, and Roos came within inches of adding his name to the list when Tom Eaves’ near-post drive slipped from his grasp.

However, as the ball slo-moed its way towards goal, he reacted smartly enough to mop up the spillage before it crossed the goal-line. There were, though, plenty in the ground who felt that the assistant’s linesman’s call in Argyle’s favour might have been a generous one.

The missed moment did not deflate Gillingham as much as it might have and, shortly afterwards, Roos was back in his large stride, diving to his left to touch a low scudder from Josh Parker around the post.

Argyle’s enterprising play succeeded in winning them plenty of free-kicks in the final third, but a combination of off-radar deliveries by Carey and David Fox and some solid resistance by the visitors saw nothing come of the opportunities.

The clearest first-half chance from a set-piece came when a swung in left-wing corner by Jervis found Ryan Edwards lurking at the far post. His downward header was on target but looked unlikely to find its way through several bodies, one of who was Carey, whose little flick could not improve matters.

Argyle began the second half, attacking the Devonport end, with purpose. Carey saw a deflected shot plop on to the top of the net and Edwards nearly forced the ball home from the consequent Jervis corner.

Argyle manager Derek Adams had talked. Before the match, about being prepared for Gillingham to play a direct game; he had also prepared for his team to have that trick in their own locker.

As if any more proof was needed that Argyle have missed Taylor’s presence, he set up Grant in the penalty area by nodding on Roos’s long punt upfield. The former Wycombe man, surrounded by defenders,  showed great patience not to snatch at the opportunity and bided his time until threading a shot past goalkeeper Tomas Holy.

There is nothing quite like Argyle with wind in their sails attacking the Devonport and Grant, especially, revelled in the confidence that is goal had given the team, cutting inside and firing off a rising shot that just cleared Holy’s crossbar.

Gillingham, though, had no option but to go for it and they did. Argyle were obliged to fall back on their defensive resources, to which Songo’o was added with 15 minutes to play.

Roos made a superb stop from former Pilgrim Lee Martin, after Sean Clare had made great strides down the Argyle right, before a quick free-kick breached the sturdy back line ten minutes from time and Eaves lobbed Roos for the leveller.

Argyle were caught between stick or twist, and they twisted.

More accurately, Carey twisted his way imperiously through the Gills defence, his dander having been raised by the referee’s refusal to give him a free-kick.

Diagouraga read him, supported him, and slotted the ball in.

There were still four minutes to survive and it took some bodes-on-the-line blocks and a great Roos save from Elliott List’s header to preserve the three points.