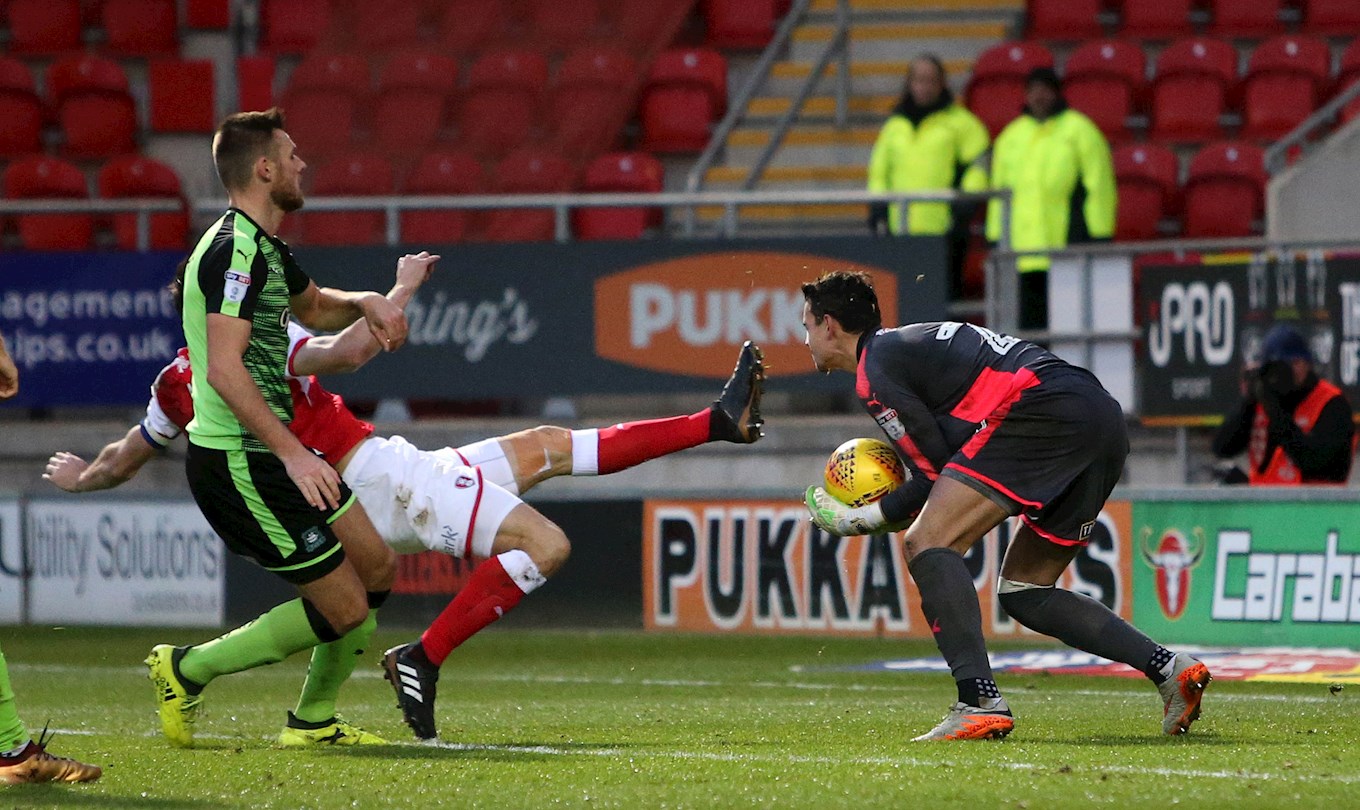 IT was nearly a perfect homecoming for Ryan Taylor.

Much of the latter part of 2017 has been a nightmare for the forward, who was injured in Argyle's season opener at Peterbrough, and remained crocked until earlier this month.

After regaining his place in the side, he led the line at Rotherham United, his first club, in the town where he was born. And scored what looked like the winning goal.

The strike came seven minutes from time in an otherwise tense affair at the New York Stadium. United captain Richard Wood's sending off, early in the second period, had given the impetus to seek a goal, and after much pressing, Taylor's header from a corner obliged.

The still, cold temperature of the December Yorkshire air had a feel of Arctic about it, and thus the first half football was about as frigid as the barren tundra. Rotherham, to their credit, dominated possession for the most part, but far more of their passes went square rather than forward, and while they kept the ball well, they did so often without threat.

When they did find a way though, there was danger. Early sighters from midfielders Richie Towell and Will Vaulks was tame and from range, but Argyle loan goalkeeper Kelle Roos, who has previously had a spell with Rotherham, too, had to be alert to thwart the lively Ryan Williams at the winger's feet as he cut inside.

Carey's shot wide from long range was as close as Argyle got to testing Marek Rodek, although for long periods of the game the Pilgrims looked more than comfortable.

Roos took an accidental bang in the face when timing a dive at the feet of Anthony Forde, leaving all Pilgrims in attendance to fear the power of the goalkeeping curse, but Roos continued unharmed.

He was more threatened by a wild challenge by Millers' skipper Richard Wood, whose rather high attempt to play the ball was in all probability genuine, but that does not proclude it from being very high and dangerous. The yellow card shown was perhaps a little lenient.

Elsewhere in the game Graham Carey was booked for Argyle and, perhaps a bit harshly, Towell for Rotherham, as frustration reigned all round. Scattered boos from the home end greeted the end of a forgettable opening period, with the small amount of atmosphere being generated by the Green Army, intermittently.

A great piece of control and subsequent shot by David Ball was admirable, but other than that neat piece of skill in first half injury time, the whole thing had one feeling rather cold, frankly.

The first five minutes of the second half changed all that.

Argyle started very well, with a sustained attack not yielding a shot on goal, but forcing Rotherham to defend their box stoutly for well over a minute.

As United struggled to get their foot on the ball, so their disciplined lapsed. Wood should have been grateful to the referee's good grace in the first half, but he spoiled his reprieve by clattering into Ryan Taylor and earning a second caution.

Rotherham retreated into a 4-4-1 formation, allowing Carey to have a bit more space. He quickly capitalised, dancing in to a position on the edge of the box and shooting into Rodak's hands.

United took off their lone striker, Hayes, and brought on midfielder Frecklington, with Ball being asked to play as a frontman, rather than his typical spot in behind a striker.

To the strains of a 'Come on Rotherham' chant that sounded more threatening than encouraging, Ball fired a shot wide, but Argyle were now on the ball more, trying to make their man advantage count.

The opener nearly came from an unlikely source. Gary Sawyer sauntered into space afforded him, then changed geared to play a one-two with Carey. The captain's edge of the box shot was straight at the goalkeeper, but Argyle were getting closer.

Argyle replaced Jervis with Lionel Ainsworth with 20 minutes to go, then Gregg Wylde came on in place of Joel Grant five minutes later, as Argyle sought to make their numbers count.

The pair of subs combined on a short corner routine which ended with Ainsworth's low shot being well turned round by Rodak. Wylde then slid a low cross towards Taylor, which was deflected wide for a corner.

From the corner, though, Argyle finally went in front. Ainsworth's whipped delivery was glanced in by hometown boy Taylor, who wheeled away in rapturous celebration, followed by his team-mates. His vigour at celebrating what appeared to be a winner against his first club earned him a yellow card. Did it bother 'im, Rotherham? One doubts it.

Taylor left the field, replaced late on by Alex Fletcher, to boos that eclipsed the cheers he had earlier received when his name was read out.

The Millers' fans ire towards Taylor soon evaporated, though, as Ajayi pounced in injury-time. A corner did not seem to want to leave Argyle's six-yard area, and after several of his team-mates failed to connect, Ajayi did enough to breach the shattered green backline.