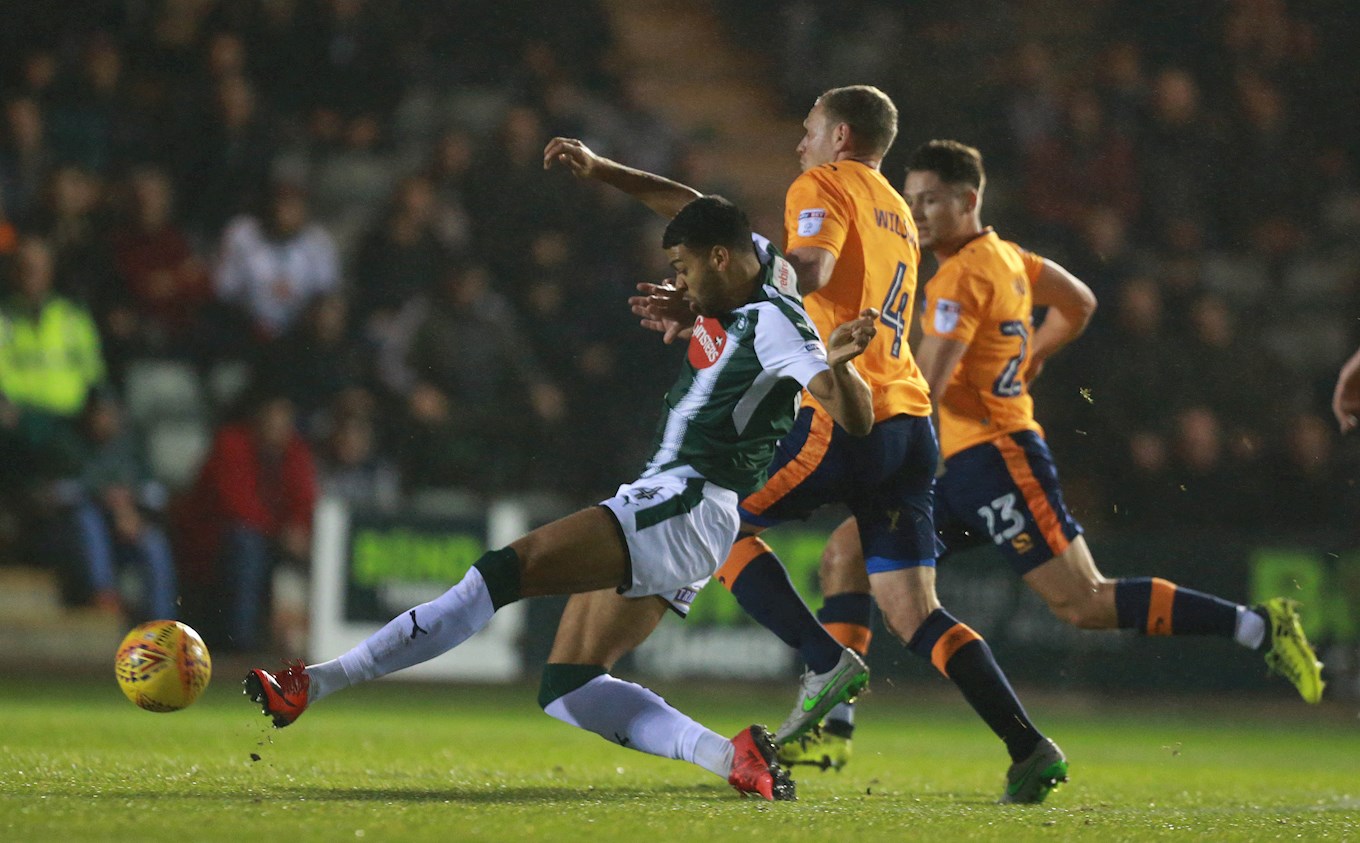 JAKE Jervis’s quickfire goal against Oldham Athletic can lay claim to be the fastest ever scored by an Argyle player.

The Pilgrim forward’s first-touch strike which completed their 4-1 Sky Bet League One victory over Oldham Athletic at Home Park came less than nine seconds after he came on as a 71st-minute substitute.

That is quicker than Jamie Mackie’s quickest debut goal in Argyle history which came when he netted within 11 seconds of coming on as substitute in a 3-0 Championship victory over Barnsley on February 12, 2008.

That was a full 52 seconds quicker than Tony Witter’s headed opening goal in the 2-2 home draw with Leicester City on January 11, 1992. Central defender Witter, who was on loan to David Kemp’s Argyle from QPR, nodded in a corner at the Devonport end in the second minute of the Barclays Division Two match with his first touch in senior competitive football.

Argyle’s quickest ever goal was scored on December 17, 2005 when Nick Chadwick sent the Pilgrims on their way to a 2-0 Championship victory against Crystal Palace after only 11.83 seconds of the game.

Argyle only took five touches as they went from 0-0 to 1-0, the kick-off being touched back to Mathias Kouo-Doumbe, whose long ball forward was headed on by Michael Evans for Chadwick to lob the ball over the disastrously out-of-position goalkeeper Julian Speroni. Argyle’s second that day came from Tony Capaldi, in the fourth minute of injury-time. There has surely never been a greater time difference between two consecutive Argyle goals.

The fastest goal scored by an Argyle player away from Home Park also belongs in the modern era. It came in a League Two game against AFC Wimbledon at the Cherry Reds Record Stadium on March 6, 2012, when Zimbabwe international Onismor Bhasera headed home a cross by Durrell Berry to open the scoring in a 2-1 win.

Argyle’s other goal that evening was scored by...Nick Chadwick.

Baz’s goal beat the previous best quickest goals away from home which were scored by Paul Gallagher and John Mitten.

Gallagher netted in a Championship game at Wolverhampton Wanderers on February 28, 2009. The goal was timed at 38 seconds, beating the previous quickest goal ever scored by an Argyle player in an away match – Terry Austin’s opener in a 2-2 draw at Lincoln on January 2, 1978 – by a full 14 seconds.

Mitten’s opener in a Second Division game against Derby County on January 20, 1968. Mitten ties with Gallagher, coming in a 4-3 home defeat by the Rams.

Another notable quick strike in Argyle’s history went to Marino Keith, who scored after 29 seconds of the home game against Bristol Rovers on March 30, 2002, the match after the Pilgrims had sealed promotion to the Nationwide Second Division. The goal was nearly even quicker as Keith converted a loose ball after a shot from Steve Adams had hit the crossbar. There were no more goals in the match.