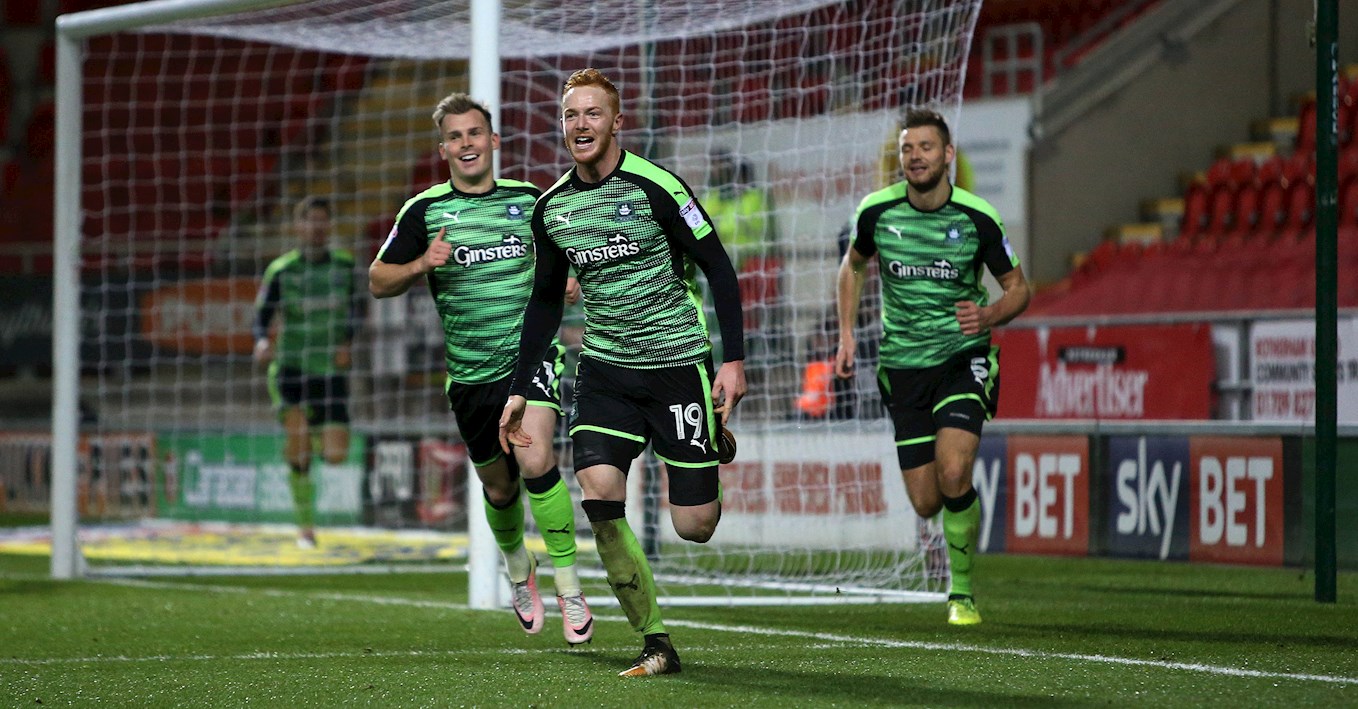 RYAN Taylor suffered mixed emotions on his return to his former club.

Argyle’s centre-forward scored on his second successive visit to the AESSEAL New York Stadium to earn the Pilgrims a point from a 1-1 draw.

His 82nd-minute strike from Lionel Ainsworth’s corner was set to give Argyle another Sky Bet League One victory after the previous week’s 2-1 triumph over Gillingham. Then United centre-back Semi Ajayi popped up in the Pilgrims’ penalty area to equalise in injury-time.

“It was nice to get a goal,” said Ryan, “but we were disappointed, in the end, not to get all three points. We think we dropped two points.

“But we’ll take the positives out of the game – it’s one more point on the board and we’ve got to start looking up the table now and try to catch the teams above us.

“In the last two games, we’ve got four points – we’ve got to look on that and build from there, as we will do. We’ll be working hard this week, ready for a big home game against Oldham.

“They are all massive games now. We are obviously down the bottom of the league so all the points we can get are massive points and it’s another point gained.”

Rotherham had not moved to their current stadium by the time Tayls left them and, on his only previous match there, for Oxford United, he also scored. On that occasion, it was a winning goal.

Ryan, who has recently returned to colours after breaking an ankle on the opening day of the season, said: “It’s a nice little record. It was nice to get a goal in front of my family but we feel like we threw two points away.

“It was a great ball from Lionel; I just attacked the near post and got a little touch on it. It was nice to get a goal. Just before it, Gregg [Wylde] put a great ball in and their centre-half put a great block on – it was disappointing not score from that, but we did the same thing again and got a goal from it.

“It’s a good little confidence-booster to get on the scoresheet. My all-round play wasn’t good enough but that is something I will work on. I have been out for four months and that’s a long time – the fitness is not quite there, but it’ll get there.”

Corporate improvement, as well as individual advancement, is also called for.

“In the attacking third, we weren’t good enough in the first half so that’s something to work on,” said Tayls, “which we will do, ready for next week.

“[Rotherham] had most of the possession in the first half. They were keeping [the ball] in midfield and we were struggling to get close to them.

“I think I touched the ball once or twice in the first half. I wasn’t good enough. But it was nice to get on the scoresheet.”