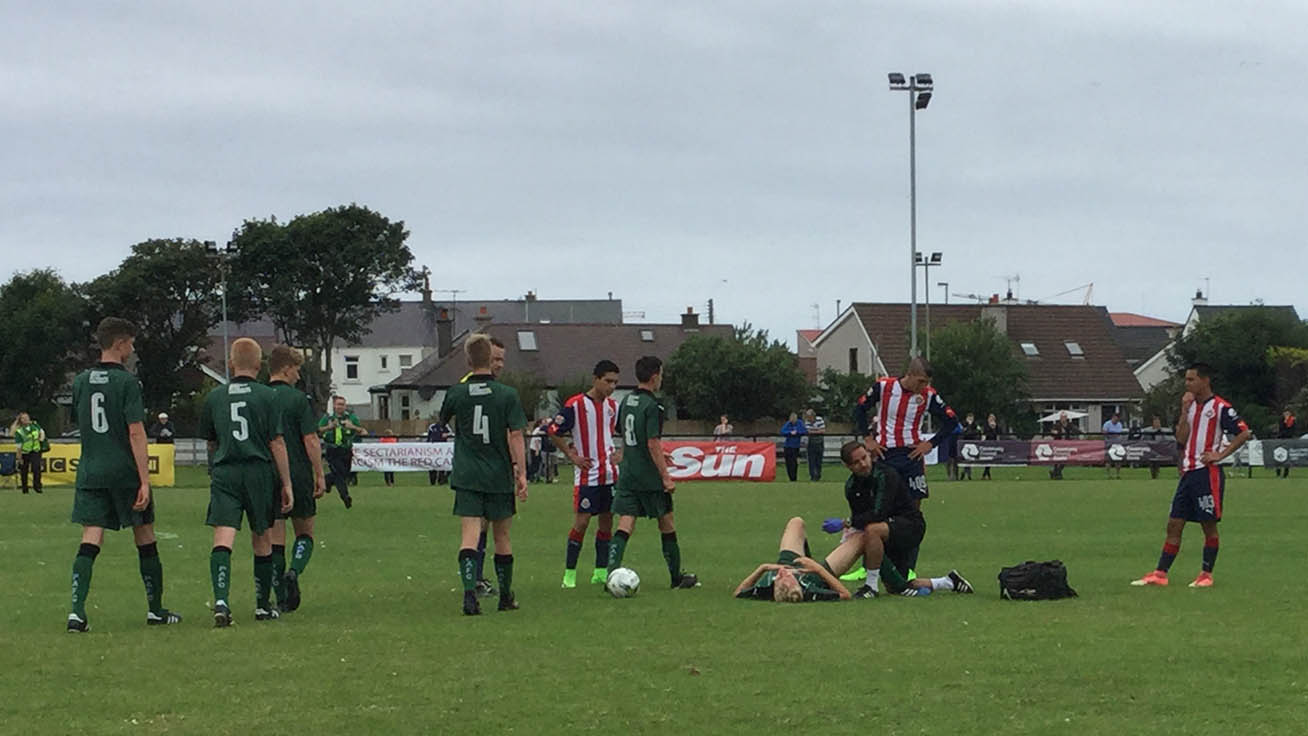 TWENTY-FOUR hours after Monday's 2-0 SuperCupNI victory over County Down, the Young Pilgrims were brought down to earth with a bump at Parker Avenue, Portrush.

Unfortunately, the players also suffered more literal bumps and bruises after their Mexican opponents decided that the only way to beat Argyle was to kick their way to victory.

Joe Seery forced a fine save out of goalkeeper Gabriel Martinez as Chivas failed to get out of their half of the pitch in the first 10 minutes.

Argyle deservedly took a seventh-minute lead when the impressive Dominic Osborne robbed a central defender to race clear and coolly slot the ball past the advancing 'keeper.

Osborne was a constant threat to Chivas until defender Jose Ruiz put the striker out of the game with a tackle that left stud marks above the knee but produced only a yellow card from a referee who failed to give the youngsters adequate protection.

Osborne was taken off on a stretcher before a disgraceful challenge on goalkeeper Shaun Hillier left the Argyle custodian requiring lengthy treatment before he resumed, limping.

That challenge did not even bring a rebuke from the referee and, a minute later, Chivas broke upfield for Omar Ibarra to fire into the far corner of the Argyle goal.

The pendulum had now turned and, in the fourth minute of first-half stoppage time, Carlos Acre volleyed home at the far post to give Chivas a half-time lead.

Argyle improved after the break but could not really threaten 'keeper Martinez again and they were caught on the break by two more goals, from Joseph Darian and Ever Corono.

Argyle Academy manager Phil Stokes said: "We were disappointed after the start that we had, as, in the first 10 minutes, up to the injury, we thought we were by far the better side and didn't allow them a kick.

"Our positional play out of possession was really good; we had a really solid defensive shape; and we were causing them lots of problems by putting the ball into dangerous areas.

"There then followed a couple of lengthy stoppages in play where we had a few tackles that injured and caught some of our boys late. That unsettled us a bit and we lost a bit of momentum, allowing them to grow back into the game."

Argyle now face American side NC Elite on Wednesday in their final group game of the first half of the tournament.  The match takes place at Clough, Ballymena, with a noon kick-off.

Phil said: "There's still lots to play for and our aim now is to win tomorrow and finish with six points and end as high up as possible - that is the beauty of this competition.

"It's now a case of picking the players up, whereas, on Monday, we had to keep their feet on the ground."