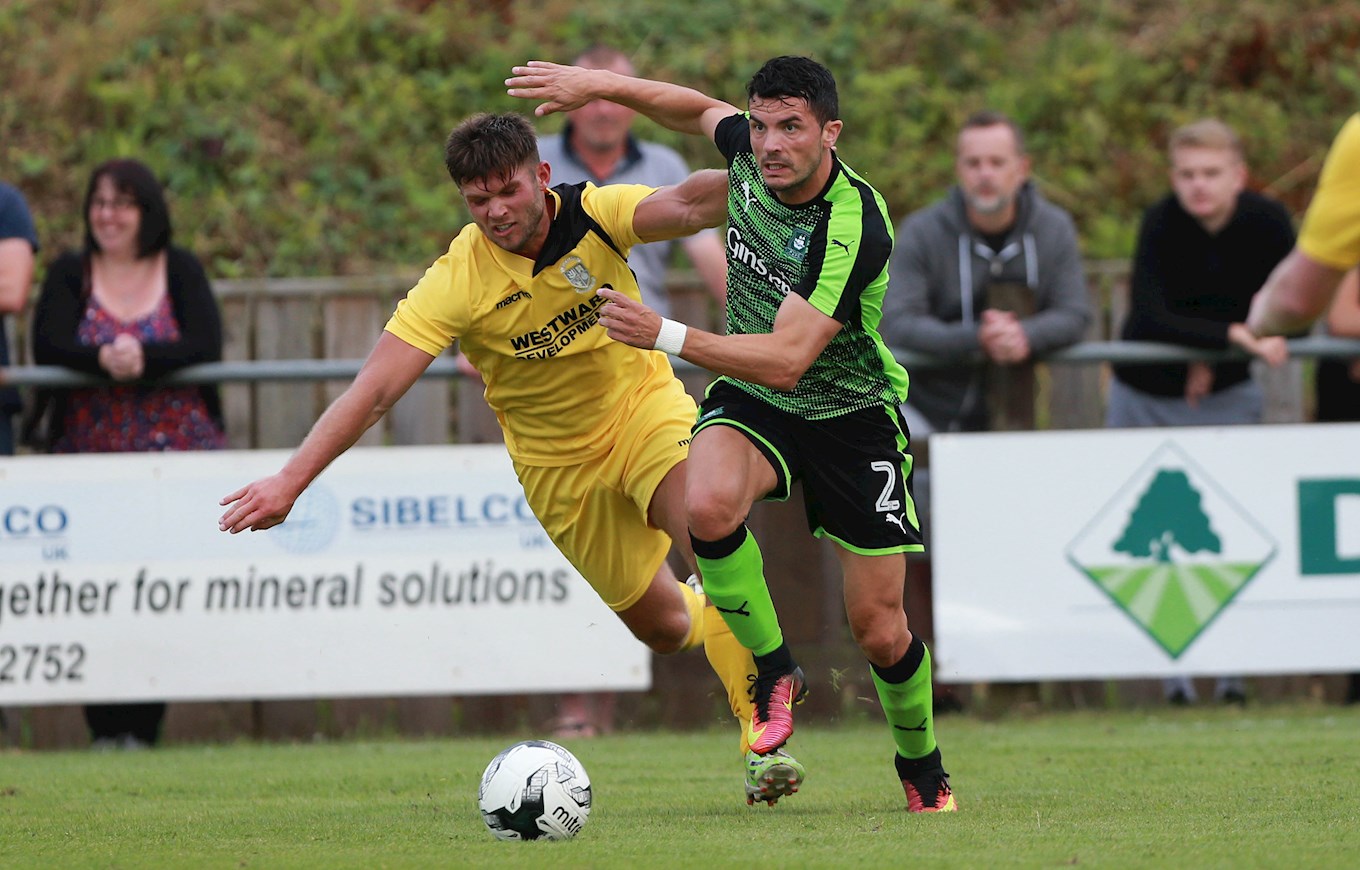 ARGYLE took their run of pre-season Westcountry victories to four from four with a comfortable win on the outskirts of Newton Abbot on Wednesday night.

A first-half double from Nathan Blissett was added to by Ruben Lameiras and Joel Grant after the break as the Pilgrims enjoyed another decent work-out in their build-up to the Sky Bet League One season, with Lameiras adding a late fifth.

Argyle manager Derek Adams had stayed true to his word in the wake of the previous evening’s victory at Tiverton and began the game with ten of the 11 that had heard the final whistle at Ladysmead. Only midfielder Graham Carey started the consecutive matches.

Carey captained the side from a five-man central midfield, behind the strike-force of Blissett, ex of Torquay United, and Alex Fletcher, ex of Torquay Grammar School, and in front of a three-man defence. Interestingly, probably only first-year professional Jordan Bentley would claim centre-back as his first-choice position, but Gary Miller and Aaron Taylor-Sinclair are experienced and adaptable competitors.

The unavailable ranks, previously midfielder Jamie Ness comprising central defenders Sonny Bradley and Jakub Sokolik, had forward Ryan Taylor added to their number, a fact probably not unrelated to the buffeting he had received by Tivvy’s defenders 24 hours earlier.

Argyle took up where they left off at Ladysmead with Blissett providing an uncannily similar finish to the one with which he had decided the 2-1 win against Tiverton.

This time, the ball arrived at his feet well inside in the six-yard box after Buckland left-back Lewis Perring had hacked the ball towards his own goal. Goalkeeper Kenny Griffiths did well to keep the ball out, but it fell kindly for Blissett to knock it home – two goals in 20 minutes of playing time from a combined distance of two yards.

Four minutes later, Blissett scored his third successive goal, completing his hat-trick of sorts from the edge of the penalty area after Sangster had picked out his run with a pluperfect long-range delivery. The big man used his bigger gait to outpace his marker and the outcoming Griffiths, got a toe to the ball, and lifted it into the by now unguarded goal.

Toolstation Western League Buckland were captained from central defence by former Home Park apprentice striker Liam Head, and he saw much more of the action than he would have if he had maintained the position of his youth. Their hard work and bravery – and a little Argyle over elaboration – ensured there were no more goals before half-time.

Blissett was unable to complete his hat-trick after being substituted at half-time, along with Miller, Carey and Fox, allowing Ryan Edwards, Antoni Sarcevic and Lameiras into the action. The captaincy passed to Jervis.

The home support had been given little to cheer but they and the Buckland players were rewarded for their tenacity when Lloyd Gardner played in Charlie Johansen, who beat te Loeke with a grubber from distance only to see the ball clang back from the foot of the post. The good spell continued when Nick Rudge forced te Loeke into a fairly easy tip-over.

More changes followed on the hour, with Taylor-Sinclair, Wylde and Jervis giving way to Grant, Lionel Ainsworth and Yann Songo’o. The captain’s armband passed to Sarcevic.

The second Argyle line-up scored a third goal, with Lameiras claiming his second of the pre-season campaign – a delightful low drive – and then a fourth, through Grant. The former Exeter man’s close-range header was made simple by Fletcher’s excellent cross.

In between, though, Buckland had become the third of Argyle’s four pre-season opponents to score against them, when Johansen reaped dividends for a hard-working performance.

The same could not be said for Fletcher, whose industry deserved better than for his powerful close-range header to be tipped over the crossbar.

Lameiras made it three for the pre-season campaign in the dying moments when he picked up the scraps after good work from Grant to emphatically seal an emphatic victory.