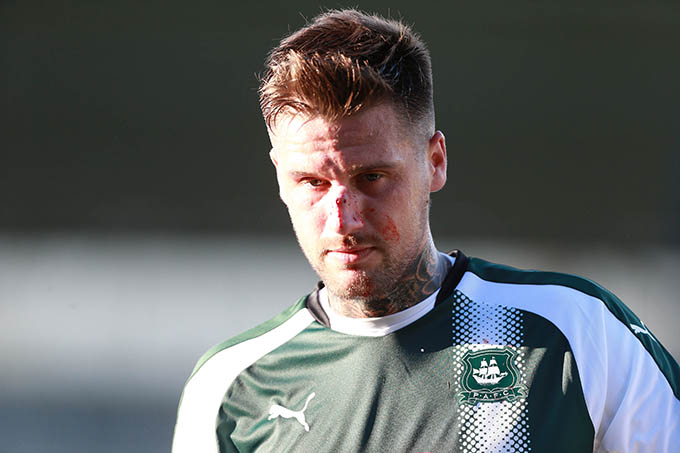 AFTER 52 appearances in his first Argyle season – a campaign that included a promotion and a player of the year trophy – one could forgive Sonny Bradley for resting on his laurels a little.

However, the burly Pilgrims’ centre-back is relishing new challenges this season. After coming through the majority of Argyle’s home pre-season friendly against Cardiff City, Sonny was considering the options in his position available to Derek Adams, and declaring that he knows the task ahead.

He said: “I’m fully aware that I have to be on it because if I am not then I can easily lose my place, with Ryan Edwards, Yann [Songo’o], Jakub [Sokolik] and even Jordan Bentley will be pushing to get into the first team.

“That’s the way I want it. I don’t want to turn up to training thinking my place is secure. If I don’t perform to my best there is a quality player waiting to take my place. That’s good for me and good for the squad.”

If Sonny’s nose would not be put out of joint by his team-mates, it was the by the back of the head of a Cardiff opponent on Friday night. In a stiff collision, Bradley’s face met skull, and broke the Yorkshireman’s nose.

Sonny explained the incident - “I went to win a header, running full pelt, and their central midfielder just stepped inside, and I ran straight into the back of his head.” – before casually adding “I’ve just broke my nose.”

“I’ve broken it a couple of times so I knew what it was straight away. I just got back on. It hurts, but the adrenaline rush gets you through. I think if I wasn’t playing football; if I was standing still and someone headbutted me in the face, it would be a different situation.

“I suspect tonight it will be throbbing.”

Bradley has been in the wars in pre-season. A toe injury sustained in training kept him out of many of Argyle’s warm-up matches, but he had recovered sufficiently to play a part in Wednesday’s win against a Devon FA XI, then line-up again two nights later against the Bluebirds.

“I feel good,” said Sonny. “When you miss a week of pre-season, some of the lads have got that extra week’s training so it was important for me to get some game time in this week. I was looking forward to a couple of games next week but they’ve been called off, which is disappointing.

“I came back fit and strong from the summer. Even though I missed a week, I was still fit, and managed to maintain my fitness. It’s all good. We still have two weeks of training, and before we know it, we’ll be at Peterborough. As long as I am 100% for that game, that’s all that matters.

“It was frustrating, but I’d rather do it now and treat it. If it happens the week before the season that is worse.”