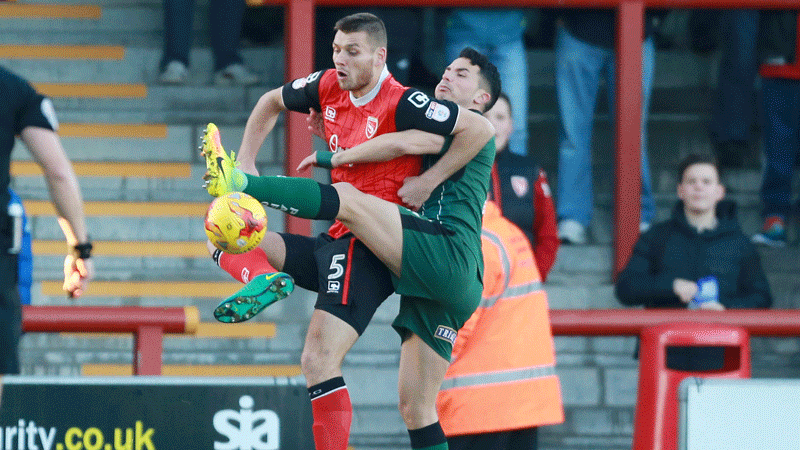 RYAN Edwards is ready for the next challenge in his football career.

Ryan has spent just over three years at Morecambe, for whom he made well over 100 appearances in League Two. Before his arrival at the Globe Arena, initially on loan, Edwards was a Blackburn player, looking to gain experience with a series of other, short, loan spells.

Now, he sees Argyle as a new challenge and is eager to get started. His ambitions tie with Argyle’s: to establish the club in the higher tiers of football again after this season’s promotion.

“I’ve played a lot in League Two,” said Ryan, “and I think I’m ready for the next step which will be playing in League One with Plymouth for the next chapter of my career. It’s a higher division than I’ve been playing in.

“It’s time to move on and take on the next challenge at the higher level which I am sure that I can do.”

Argyle had to agree a compensation fee with Morecambe over Ryan’s move, making Edwards just the second player to have cost Argyle any money since Derek Adams took over as manager.

“It’s a nice compliment if someone is willing to sign you, never mind pay money for you,” said Ryan. "For them just to want you, especially a club like Plymouth [is great].”

“I’ve been on holiday of late checking my phone seeing if anyone has got in touch. Thankfully now it’s all been done and now I can do my bit getting back fit for the pre-season which is in just over two weeks.”

Ryan, who made 50 appearances for Morecambe in 2016-17, was voted the Shrimps’ Player of the Season by both fans and fellow players. He says Argyle fans can expect to see a defender who lives up to the title.

“Obviously I’m not perfect. I’ll hopefully still improve at Plymouth and help them to not just stay in the league but kick on again.”

Edwards was also keen to commend his former manager at Morecambe, Jim Bentley. Edwards says Bentley, who like Ryan is a Liverpudlian, had helped him progress during his time with Morecambe.

Ryan said: “He’s from my area, he’s played my position and he’s the reason why I’ve kicked on. Every game his advice has helped. He has been spot on with me. I can only thank him and offer that because it’s been brilliant and it’s what has pushed me on.

“I can only thank them for the chance I got given. I think I’ve paid them back.

“Now it’s time to move on and take on the next challenge at the higher level, which I am sure that I can do.”