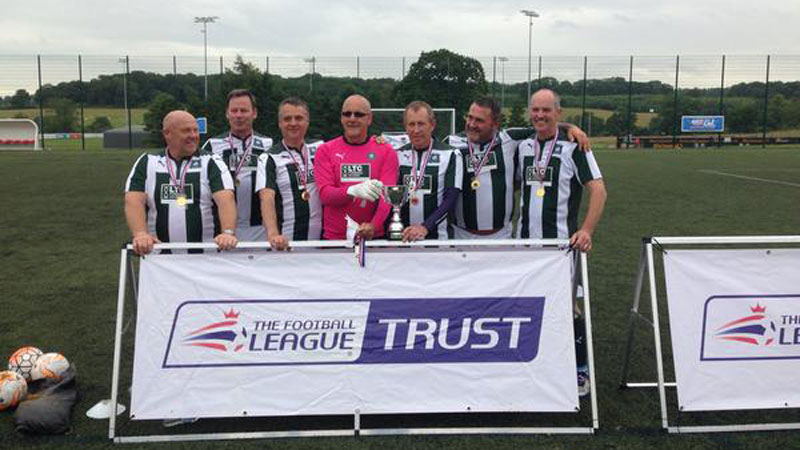 ARGYLE will this weekend attempt to reclaim the national Walking Football title that they claimed in 2015.

Proving that you’re never too old to take part, 12 teams of men and women aged over 50 will go for glory in tomorrow’s EFL Trust Walking Football Cup Finals.

The competition, which takes place in the impressive surroundings of Aston Villa’s Bodymoor Heath training ground, is growing in stature with an increase of participation year on year.  Over 1,500 men and women from a record breaking 200 teams have taken part in this year’s competition - a 17% increase in teams from last year.

To reach this stage, the 12 teams have already won their local competition which was held by EFL and conference clubs across the country.  This gave the opportunity to represent their club, wearing official club colours in the regional finals, with the winners and runners up progressing to Saturday’s final.

The slow-paced version of the beautiful game, aimed specifically at the over 50s, has grown enormously over the last few years with proven health and social benefits of its participants. A survey completed during last year’s competition showed that 82% of participants believe their physical health has improved by playing walking football, with 79% of those competing in last year’s competition saying their level of exercise has increased.

”I think it’s great for fitness as well as the social benefits. The great thing about Walking Football is you’re still playing the same sport and doing the same things, moving, tackling and shooting. It’s just a little bit slower!”

Mike Evans, Director of Operations at the EFL Trust commented: “The Walking Football Cup Final is a key event in the EFL Trust calendar and is now into its third year.  We recognise the social and health benefits the game has for participants and want to use the power of professional clubs to help grow the game.  The Cup provides ‘healthy competition’ in every sense of the word. It’s a chance to represent your local club, wear the club badge and play against league clubs.”

"The group stages of this year’s competition were once again hotly contested but a special mention must go to Blackpool FC and Plymouth Argyle. In 2015, the teams met in the first ever EFL Trust Walking Football Cup final which the Green Army won in extra time.  Whilst last year, the teams met at the semi- final stage with Blackpool gaining revenge on the way to the title.

"With both teams qualifying again, will we see part three of their rivalry today or will someone else break their stranglehold on the title?"

Continuing on from last year’s final, a Legends Game will kick off at 1.30pm which will see an EFL team take on its charity partner Prostate Cancer UK, with a number of ex-pros on the team sheets pitting Villa stalwarts Shaun Teale, Ian Taylor and Bryan Small, against ex-Birmingham City players Michael Johnson and Dave Regis.

Here are the 12 finalists: