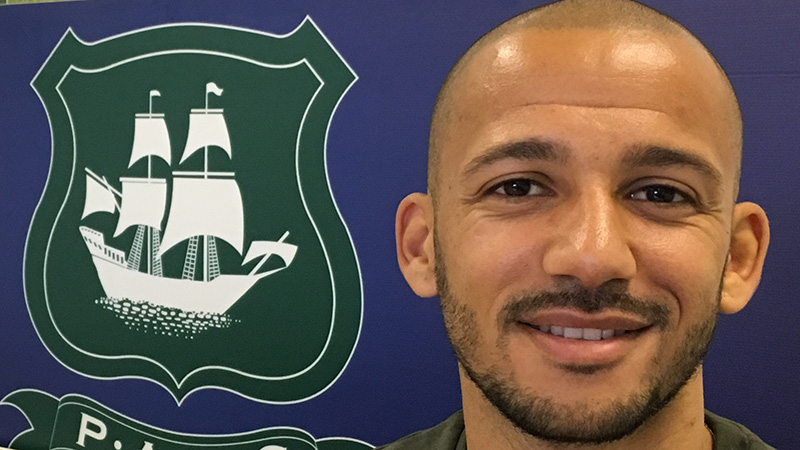 NEW Argyle recruit Lionel Ainsworth took a sounding from a former Pilgrim before becoming Argyle’s first signing of the summer.

The 29-year-old winger sought out Motherwell team-mate Carl McHugh before committing to Home Park in preference to remaining in the Scottish Premier League with the Steelmen.

“I had a bit of chat with him over what was happening,” said Lionel, “and he couldn’t talk highly enough of the club, which is brilliant. I am looking forward to getting started.

“It’s a massive club that I’m joining. I am happy to be part of that and looking forward to the next season.”

The Nottingham-born attacker spent three seasons with Motherwell, the 13th club of a professional career which began – against Argyle – in February 2006 with Championship side Derby County. A little more than a year later, he left Pride Park to join League Two Hereford United,

“It was probably one of the best things that happened to me as a youngster, getting released,” he said. “I just worked hard and, within the blink of an eye, I got a move to Watford, which was a blessing. It was a great learning-curve.”

His move to Vicarage Road continued a peripatetic career which has now, with his arrival in the Westcountry, seen him take his talents to all four corners of the UK.

He said: “What I’ll bring is pace, a bit of trickery; I can go left or right. The main thing is to play to everybody’s strengths, not just mine. I’ve got to play to other people’s strengths, to suit them.

“Hopefully I can bring some goals and assist in a lot of goals, as I have done in previous years.”

Lionel joins the Pilgrims at the start of a season in which they will be looking to build on the foundations of promotion from Sky Bet League Two in the preceding campaign.

“If we can keep that momentum, you never know what can happen,” he said. “I’m sure the manager is going to bring some top players to the club.

“The club deserves it and the fans deserve it.”