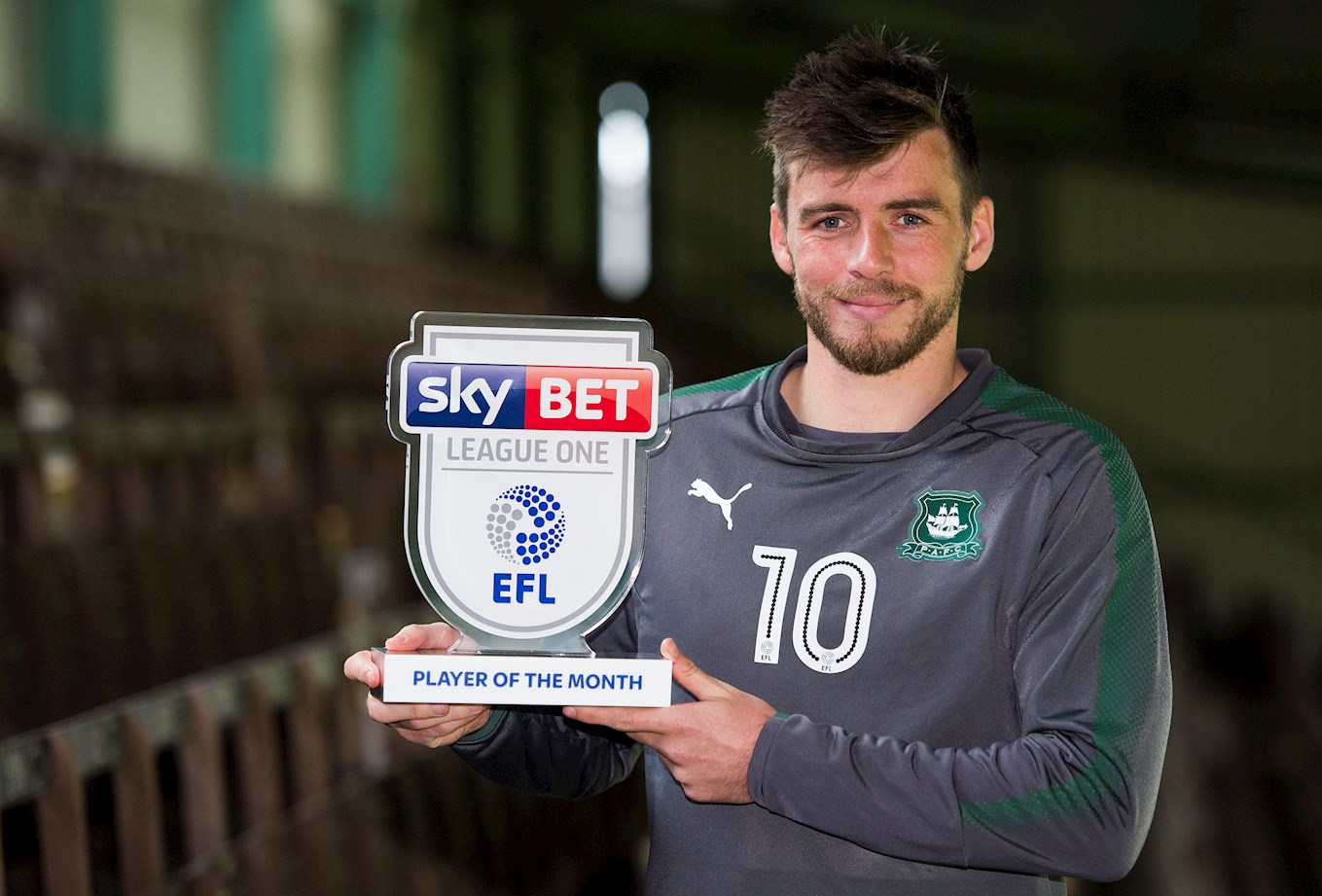 GRAHAM Carey has been named Sky Bet League One Player of the month for October.

He beat fierce competition from Ben Amos who only conceded once in four matches in which his Charlton side picked up 10 points; Blackburn’s Bradley Dack who scored the opening goal in three successive home games for his side, and Erhun Otzumer of Walsall, who scored three goals this month including a spectacular free kick against Blackpool.

Graham was involved in all five of Argyle’s goals scored in the month. He scored with two spectacular strikes as well as assisting three for his team-mates. Carey’s first assist came against Fleetwood in injury time where he whipped in a delightful ball for Alex Fletcher to nod home for a consolation goal.

His second involvement was a truly spectacular strike against the league leaders Shrewsbury where he jinked his way past three Shrews players and then curled the ball into the top left hand corner off the post, which earned Argyle a valuable point.

He replicated the treatment just three days later as he weaved his way past Blackburn’s midfield to curl a perfect left footed strike into the net at Ewood Park. The strike was Argyle’s first first half goal of the League season, in which Argyle picked up a point that many would not have been expecting.

Graham picked up his second assist of the month when he cut inside drawing in four defenders to play a through ball for Joel Grant to finish, and score the winning goal at AFC Wimbledon. With the spark from Carey creating the only goal of the match it ended Argyle’s winless run of nearly two months.

He continued where he left off at home to Rochdale. Within 43 seconds he turned provider for Joel Grant once again. Carey beat his man to whip a delightful ball to the back post where Joel nodded home.

Then, although it would not have been included in the judges’ reckoning, Graham continued to impress on Saturday scoring the only goal in Argyle’s 1-0 FA Cup victory over Grimsby.

Argyle boss Derek Adams said: “He’s had very good form in October, and into November as well. He’s had a good number of assists in the matches, and also a few goals as well. He has come back into form at the right time. He’s been a big player for me at this football club, and I’m delighted he has won the award.

"His overall game is improving all the time. He has very good work rate; he works very hard in training and takes it into games. He wants to create chances for other players, and he has a very good goalscoring ability as well.”

Former West Bromwich Albion and Sunderland striker Goodman said: “Carey is going to be so vital to everything that Plymouth do this season, and his goals and assists have gained some crucial points for the Pilgrims.

“With a knack for scoring incredible goals, keeping him fit and firing for the remainder of the season will be one of Derek Adams’ number one priorities.”