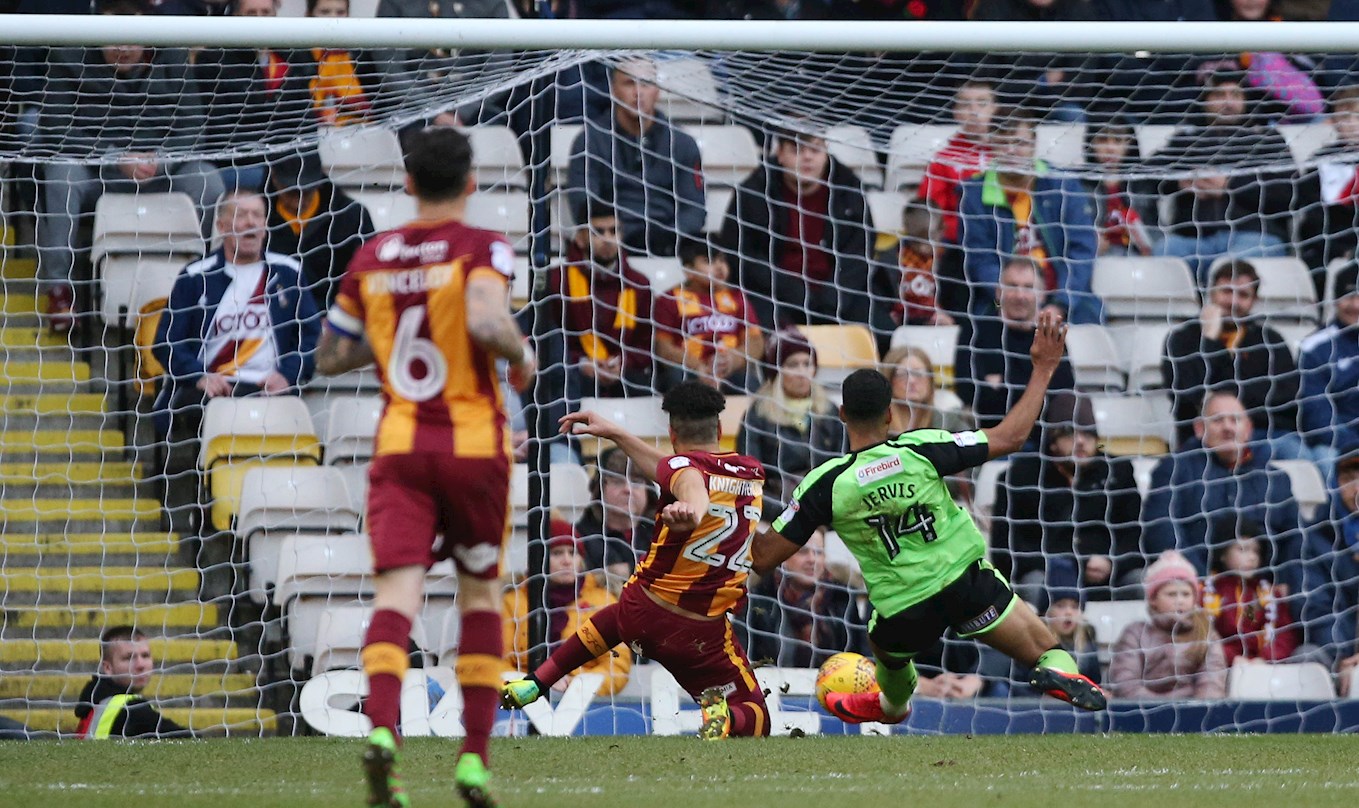 IT might be called the Northern Commercials Stadium these days but Valley Parade was green – how green! – thanks to Jake Jervis and Remi Matthews.

Jervis scored his first goal since the opening home game of the Sky Bet League One season, ten minutes before half-time to earn the Pilgrims a win that goalkeeper Matthews preserved with a late penalty save from Tony McMahon.

They were the highlights of another fine team performance that demonstrated everything that is good about Argyle: character, determination, work-rate - and belief.

Argyle manager Derek Adams had wrestled with just one selection conundrum during the week: the not inconsiderable challenge of how to replace the irreplaceable, with Graham Carey – scorer or assistor of the Pilgrims' six previous goals and League One Player of the Month for October – serving a one-match suspension.

The onerous task fell to Lionel Ainsworth. The experienced speedster has been hampered by injuries since his summer arrival from Scottish top-flight side Motherwell, to where he was originally enticed by current Bradford manager Stuart McCall, and made only his third league start. One of those ended in an early thigh strain, too.

Otherwise, the Pilgrims' starting 11 was the same that had knocked Grimsby Town out of the FA Cup a week earlier (to earn another visit to Bradford in the second round) and had claimed four points from the last six available in the league. Indeed, it was the first tinkering of personnel anywhere except between the goalposts from five unbeaten matches.

For their part, Bradford made myriad changes from the side that had lost their midweek Checkatrade Trophy Yorkshire derby at home to Rotherham United, reverting to nine-elevenths of the starting line-up that had paved the way to a 1-0 victory at Portsmouth in their previous League One match.

Ainsworth was a straight swap for Carey as Argyle settled quickly into their 4-3-3 slash 4-1-4-1 shape which has served them well over recent weeks, proving to be a solid platform – just two goals conceded in their previous four games. It is a measure of their improvement that Toumani Diagouraga, who arrived at Home Park on October 10, has not known what it is to play in a losing Pilgrims’ team.

Like others before then, Bradford probed for a weakness, but it was Argyle who created the first sit-up-and-beg opportunity when a driven cross from the left by Aaron Taylor-Sinclair saw David Fox just fail to get what surely would  have been a goalscoring touch.

The Bantams clucked into action. Nicky Law, son of the former Pilgrim of the same name and a former Home Park trialist himself, was played in down the left and sent over an exquisite cross for Charlie Wyke, whose header was blocked by Sonny Bradley.

The danger remained live and Wyke was allowed a second dig which flashed across goalkeeper Remi Matthews and wide of the goalpost.

Argyle responded with one of the sweetest Pilgrims goals of this, or any other, season. The assist from Ainsworth was eclipsed by the pre-assist assist from Fox, who threaded a pass expertly in between centre-back and full-back to where Ainsworth had expertly anticipated his intentions.

Jervis and Joel Grant had also read the entire move astutely, with the result that both were on hand to run in and convert Ainsworth’s undefendable low driven cross from the bye-line. The man with the longer legs won the race, naturally.

Bradford were rocked and took a while to regain their earlier composure against visitors who had an extra spring in their step.

Good job. Matthews, who has been beaten only once in his Argyle career – and that by something of a fluke – needed to be at his springiest to tip over successive long-range efforts from Bantams’ striker Paul Taylor and preserve the Pilgrims’ lead to the interval.

Bradford sent of attacking full-back Tyrell Robinson for the second half and set about Argyle with real intent. Not for the first time in the last three seasons, we saw a Pilgrims’ back line appear to positively relish absorbing and repelling the pressure, their perverse pleasure increased by the fact they were doing so in front of the hugely loud home end.

Taylor continued his mission to collect a 30-yard worldy, but was twice wide of the target before Jake Reeves took up the long-distance challenge and beat Matthews, but not the crossbar.

Argyle did not merely sit back and take everything on the chin, though, and came close to extending their lead on the hour, when Ainsworth crossed from the right and found Grant running in for a free header that could not find the target.

Diagouraga skied an attempt before Ainsworth was substituted in favour of Antoni Sarcevic, to lend another shoulder to a wheel which Bradford cranked up by bringing on winger Alex Gilliead for midfielder Jake Reeves and striker Dominic Poleon for Jones.

Gilliead teased Taylor-Sinclair before sending over a fine cross from the bye-line which was met on the full by the head of Taylor, who could not direct the header on target, as the game took on the look of an attack v defence training-ground exercise.

City were handed an unexpected lifeline when referee Carl Boyeson awarded them a penalty after Matthews had saved on the goal-line with ten minutes to go. It was unclear what the official had spotted that saw him point to the spot and, certainly, Argyle’s players, normally meekness personified, were moved to protest in numbers and at length.

McMahon, something of a dead-ball specialist, struck his shot confidently but Matthews read the body language and moved quickly to his right to get a firm hand on the ball and push it wide.

The miss understandably drew a bit of the sting out of Bradford, and Argyle, playing on the counter-attack, came close to sealing the victory when Grant fired just wide with two minutes of the 90 to play.

Added time was a mini-siege at time, with City goalkeeper Colin Doyle spending more time in Argyle’s half than his own.

We didn’t have Carey; it didn’t matter.