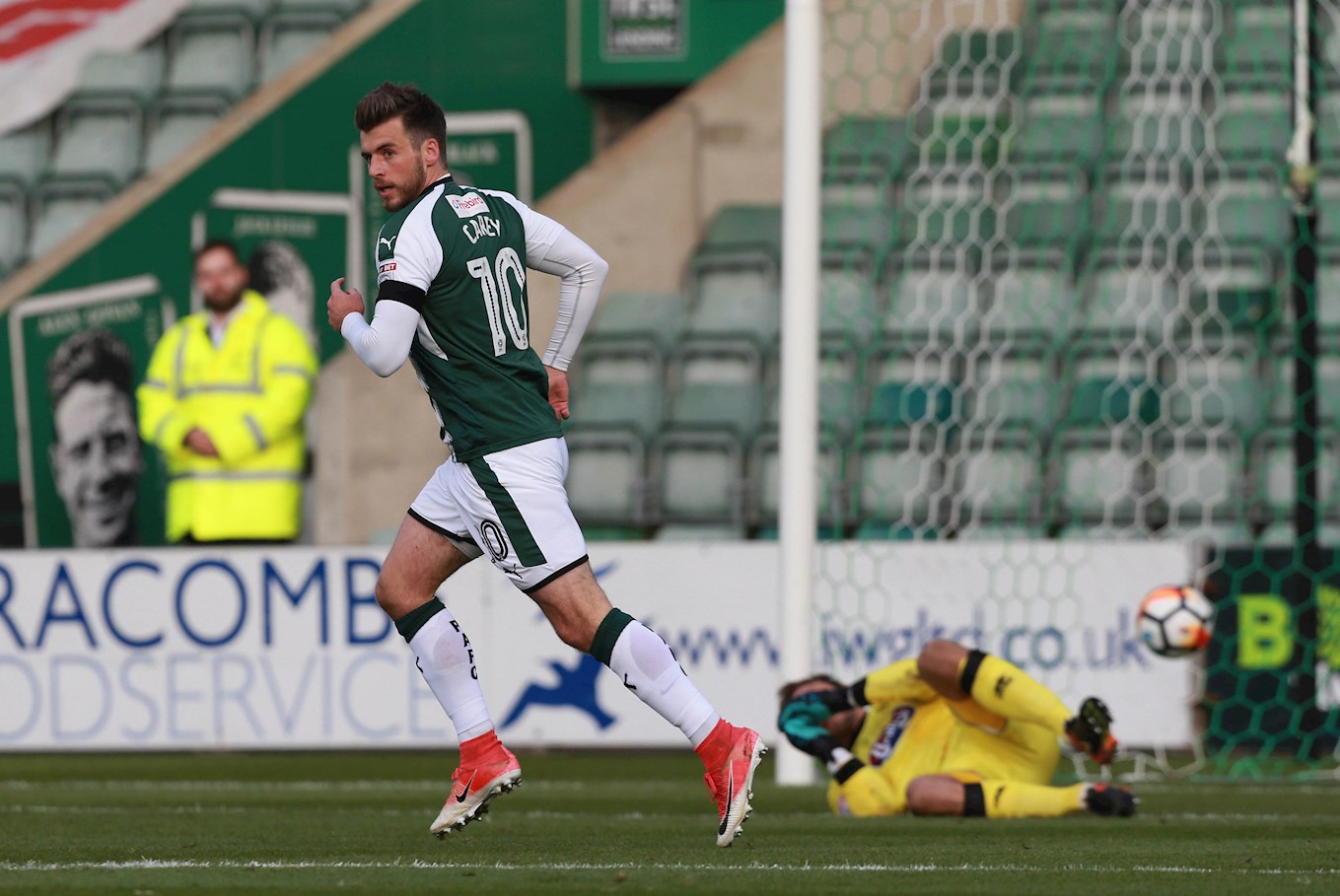 WHO needs the magic of the FA Cup when you have Graham Carey?

The Irishman has been in scintilating form of late, but even by his high standards this was a virtuoso performance to take Argyle into the second round of the famous old competition.

A ninth minute wondergoal to add to his ever-growing collection of pearlers was the high point, but all afternoon Argyle's number 10 mesmorised fans and opponents alike.

Argyle ought to have been out of sight in the first half, then invited a little too much pressure as time began to elapse, but deservedly take their place in Monday's draw.

The pre-match indication, from both sides, was that each manager was prepared to take the competition seriously. Neither Derek Adams or Grimsby boss Russell Slade changed the starting 11 from their previous league fixture.

Grimsby arrived with a five-match unbeaten streak in tact, compared to Argyle's four. Six of those nine accumulative games had been draws, mind you, so odds on a replay seemed valid. It might only be a case of by which means. All Grimsby's draws had been 0-0, all Argyle's 1-1.

It would undoubtedly have suited the visitors to draw the game more than Argyle, who presumably did not have 'Tuesday trip to Cleethorpes' in their wish-list for the season.

The game's opening ten minutes was relatively cagey. Remi Matthews easily pouched a slightly deflected long range effort in front of the Devonport end, while Argyle attempted to emulate the previous week's opening goal, with Carey dinking a cross to the far post to Joel Grant. This time, however, it was a little too long for the man who had headed Argyle into a first minute lead seven days previously.

Grimsby should have taken Carey's involvement as a warning.

Playing on the right flank, he was soon involved again, leaving one man for dead on the touchline, bursting into the box and trying to beat a second only to be partially blocked off when his shot came in. Still, though, Town had not learned.

Moments later, from a similar position, Carey set off again, using his deceptive pace to fire through a funnel of Grimsby defenders and make a telling incursion into the area. A half-step to his right opened up his body, and then a gorgeous curling effort sailed by James McKeown and into the net.

Carey's only previous Emirates FA Cup goal - indeed the only one Argyle had scored in the previous 330 minutes or so of FA Cup action - had come 318 days earlier, from the spot, and it sent the Pilgrims to Anfield.

The Irishman was all over this game. Soon he was off again, coming inside from the right, and this time feeding Grant, who controlled well on the edge of the box and sent a deflected effort not far wide.

When David Fox was clipped when making a bright forward run, referee John Busby made a good call to bring play back, and from the dead-ball Carey's whipped 25-yarder forced McKeown into a needed tip-over.

By the half hour mark, one was actually starting to feel sorry for Grimsby left-back Paul Dixon. Time and again he had to face Carey, confidence full to the brim and gliding around Home Park as if it was his own personal playground. Another dart into Grimsby territory forced a hurried, inaccurate clearance that fell to Jake Jervis, who caught a left-footed effort sweetly, but hit it straight at McKeown.

Some more indecision by Grimsby's rearguard nearly led to Grant's industry getting a reward, as the Argyle forward nearly nicked the ball inside the area, but Town had weight of numbers, and saw the ball away.

As if to remind us all that this was still just 1-0, Grimsby came exceedingly close to an equaliser. The move started fortuitously; David Fox's tackle was well timed, but ricocheted to sent James Berrett away down the right flank. Berrett went right to the bye-line and stood a cross to the far post where both Siriki Dembele and Danny Collins lay in wait. Collins connected, albeit not well, but either one of two deflections off of the lurking Martyn Woolford may well have found its way over Argyle's goal-line. As it was, the ball trickled wide, and Argyle survived.

This started a five-minute period of indecision from the Pilgrims, who seemed to suddenly remember three recent occasions where they had led 1-0 and let it slip. As it to shake his team mates from slumber, Carey picked up the ball in a pocket, and slid Grant. Possibly caught between trying to flick a ball over the advancing goalkeeper or go round him, Grant did neither, and Grimsby gratefully gathered.

The same combo were at it again soon afterwards, with Grant finding space well and feeding Carey on the right flank. Carey beat two men on a horizontal run, but was asking too much even of his exceptional left foot with a leaning-back curling effort that did not curl enough.

Sawyer was fouled right on the edge of the area, from a narrow angle, setting up another Carey drive. This one hit the crowd of players in the area, and eventually fell to Fox, who hit a very decent, controlled left-footed effort, but again found the waiting gloves of McKeown.

Add two minutes, and repeat. Fox was actually in a good position to cross on the right, but simply paused and passed to Carey. The man of the moment picked it up on the touchline on the right wing, and was soon in the centre of the D watching another effort go marginally wide, having dribbled away from copious Grimsby defenders.

After the break, two heart-in-mouth moments kicked off proceedings. First, Dembele - why is everyone named Dembele so ludicrously good at football? - made a beautiful run into the area, only to snatch his shot well, well wide, as Grimsby threatened to make Argyle pay for not translating their ultra-dominance in the first half into goals.

Then, Carey, with a rare piece of casual play, let a ball creep away from him, and lunged at the loose ball. It was probably about as bad as the tackle that he got sent off for earlier in the season. Mind you, a yellow each time would probably have been the fairest outcome.

There is a risk of this match report turning into a chapter of Graham Carey's autobiography, but the Irish talisman continued to dominate. A run on the right wing that ended in a chip into the goalkeeper's hands sounds mundane, but had it come off, with the final touch being a left-foot-behind-the-right rabona kick, it might have topped off even Carey's remarkable highlight reel.

Carey's next involvement was part of a huge 60-second spell that almost completely turned the game. Once again twisting away from his man, Carey was bearhugged to the ground, inside the penalty, but referee Busby was unmoved. Grimsby broke, and when a ball from the left was centred, Woolford had a simple task to equalise. He did not. Instead, he stood almost motionless, unable to believe the scuff that ensued.

The game was very open now, and after Dembele wriggled some space on the edge of the area, his curling effort looked on target, and drew a fine flying save from Matthews.

At the other end, Jervis's burst drew a foul for which Ben Davies was booked, and from the free-kick Sonny Bradley nearly got on the end of Carey's perfect delivery.

Dembele was then off again, defying a phalanx of Argyle defenders until eventually drawing a free-kick from which Town threatened, until Summerfield blasted over.

Grimsby made a double substitution on 68 minutes, including Jamille Matt, to try to salvage a draw.

Matt was soon in the action. A long throw-in was half-cleared, then returned by Summerfield. It reached Matt, who cleared shoved Yann Songo'o off the ball. The referee did not give a foul, then in a two-wrongs-making-a-right moment, failed to give a penalty for Songo'o barrelling into Matt as he tried to recover.

Dixon was eventually booked for a foul on Carey, as Carey got away from him in the area. However, it was actually Argyle's own 18-yard box, and Carey was simply relieving the pressure.

For the time being. Grimsby's urgency and Argyle's - anyone's - natural inclination to protect what they held meant much of the play being played in the Pilgrims' half.

Nerviest moment went to when final Grimsby sub Harry Cardwell pressured Bradley, who nodded back to Matthews. The on-loan goalkeeper dived to collect, but slid to the edge of the area. He did well to let go and pass the ball out, then the edge of Sawyer's boot just got enough on the ball to stop Matt stealing in.

Grimsby half-chances continued to flow, from long-ball and set pieces, but the Pilgrims held on.

On Monday, Argyle will be ball number 21 in the second round draw. This day, though, was all about number 10.