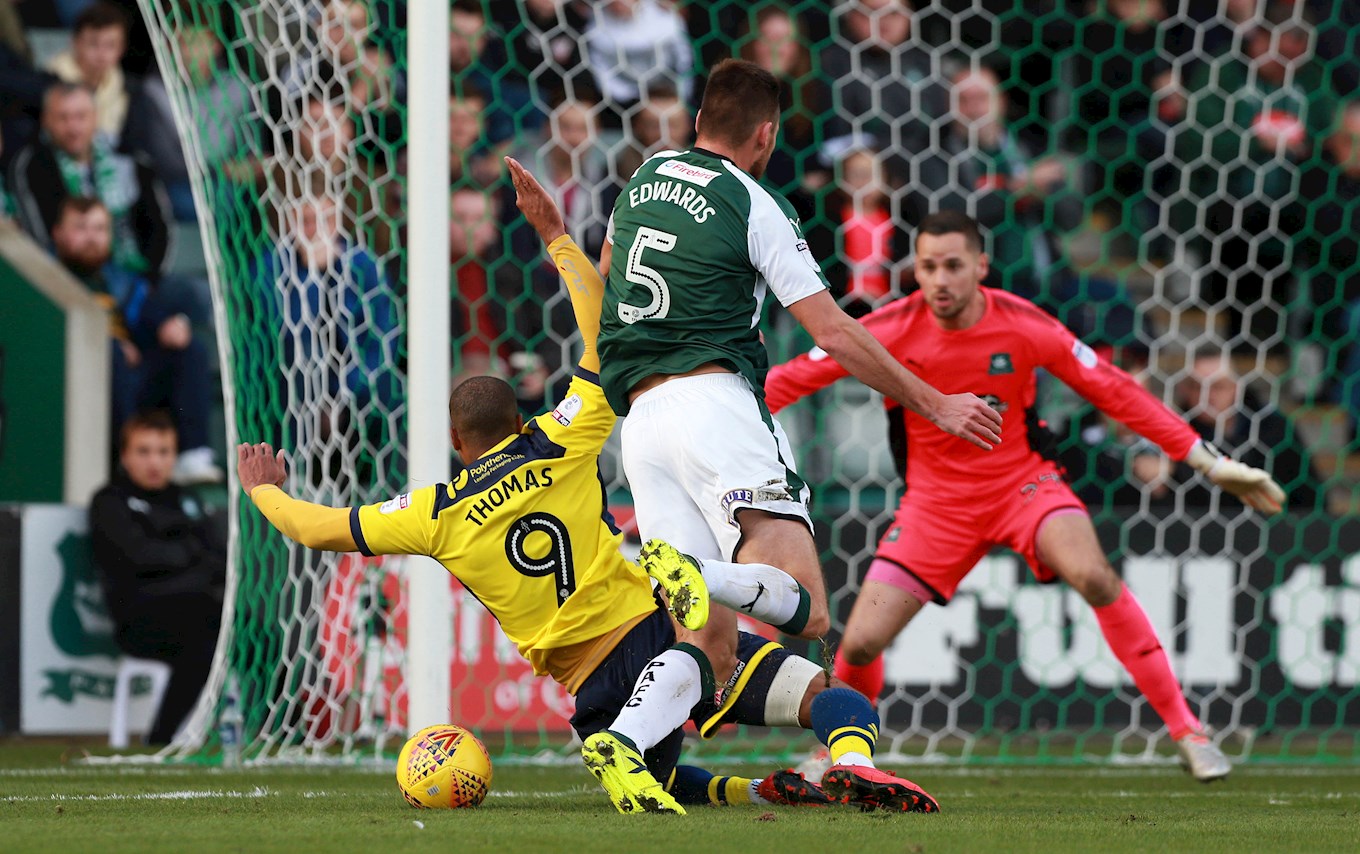 AFTER six games unbeaten, the Greens’ early-season blues returned as a sixth red card of the campaign sent them on their way to an Armed Services Day defeat.

Ryan Edwards was dismissed, for the second time this season, when referee Graham Horwood awarded Oxford a 14th-minute penalty that fell into the ‘soft’ category and which was converted by Ryan Ledson.

The ten-men Pilgrims’ resistance lasted until seven minutes into the second half, when Wes Thomas doubled the lead, and further goals from James Henry and substitute Jon Obika completed a miserable afternoon.

Argyle manager Derek Adams had resisted the temptation to stick with the 11 that had set the foundations of the previous week’s 1-0 win at Bradford, although, with Graham Carey available again after suspension, one suspects that the temptation cannot have been that great.

Lionel Ainsworth, who laid on Jake Jervis’s goal that was the difference between the two sides at the Northern Commercials Stadium as Carey’s replacement, was stood down.

Oxford arrived at Home Park without a win in four and without key players Rob Hall and captain Curtis Nelson. The former Pilgrims’ skipper was at his old stamping ground, though on crutches after suffering a season-ending ruptured Achilles seven days previously.

Oxford clearly thought Carey would return as, unlike previous recent opponents, they had apparently devised a game-plan to cope with his threat. Every time he received the ball, his route inside his marker was cut off by at least one other yellow-shirted player.

Not that the visitors’ tactics were entirely negative and goalkeeper Remi Matthews was obliged to maintain his excellent form since arriving on emergency loan from Norwich City and beat out a shot from Josh Ruffels.

Matthews had saved a late penalty at Bradford the previous week and he soon found himself facing another spot-kick when Horwood decided that a coming-together between Wes Thomas and Edwards constituted a deliberate foul by the Argyle man.

Given that it was borderline whether the challenge was a foul, never mind deliberate, Horwood’s subsequent decision to dismiss Edwards was mildly astonishing. Since the relaxation of the rules, in order to receive a red card and concede a penalty for the same offence, the challenge has to be either pre-meditated or violent.

Still, off Edwards toddled as Argyle found themselves playing 10 v 11 for the sixth time in 15 matches, and a goal down for the first time in seven after Ledson beat Matthews.

Miffed they might have been, but Argyle did not take the double whammy lying down and, with Yann Songo’o dropping back from midfield to fill in for Edwards, did not look too disadvantaged.

They came close to leveling twice with the same shot, a Carey free-kick which beat the defensive wall but hit the post and rebounded to clatter goalkeeper Simon Eastwood on the back of the head and bounce the wrong side of the post.

Argyle reorganized further at the break, with Gary Miller replacing Aaron Taylor-Sinclair and came out swinging. A quickly taken free-kick from David Fox found Jervis in the penalty for a shot which was dragged wide.

Argyle and Horwood had a subsequent let-off when Thomas broke away from an offside position and fired his shot against the outside of the post, but the Oxford man was not long before further irritating home support who had not forgiven him for the role which he played in Edwards’ sending-off.

He profited when Rothwell’s break into the area was halted only by a good save from Matthews, but the ball fell sweetly for Thomas to wrap a leg around the loose ball and shovel it inside the post.

The Pilgrims were in uncomfortably familiar territory: did they chase the game a man down and leave themselves open, or simply swallow the punishment meted out by Horwood and Thomas?

It was probably a case of heads they lost, tails they did not win, in any event, and Henry, who had hit the bar, sliced his way down the Argyle left a little too easily before claiming Oxford’s third goal.

Both sides appeared to have accepted the outcome long before U’s substitute Obika added their fourth, meaning that Matthews had conceded four times as many goals in one game as he had in his previous four matches.

As a further reminder of the plagues of the immediate past, Matthews spent the final few minutes clearly in some degree of pain before the final whistle brought everyone relief.