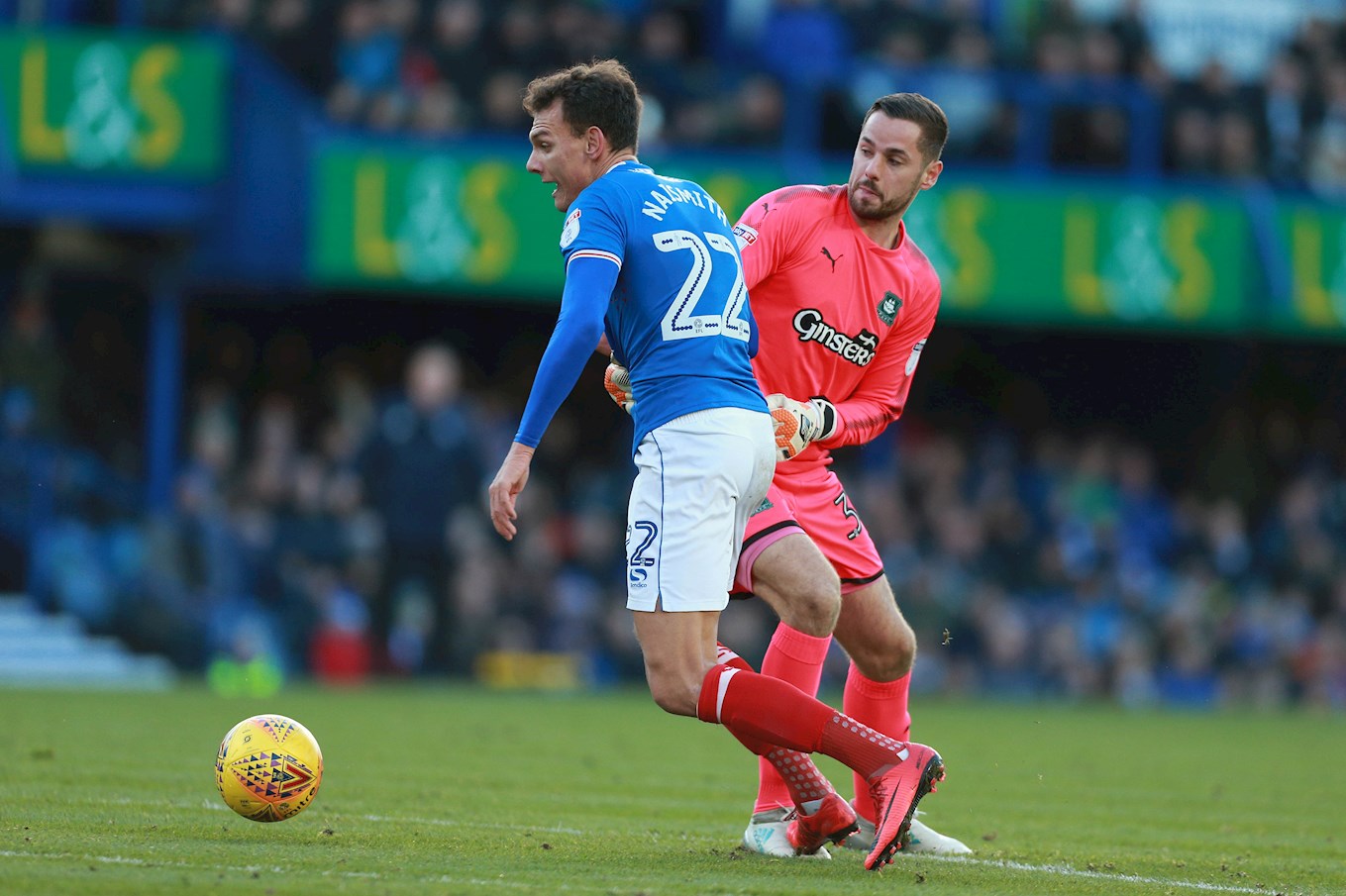 Match report for Portsmouth vs Plymouth Argyle on 25 Nov 17

GOALKEEPERS, the last line of defence, suffer the spotlight more than most. It comes with the job.

For the most part, Argyle’s gloveman Remi Matthews had a splendid game at Fratton Park, bailing out his team-mates, not for the first time since his emergency loan from Norwich, on several occasions.

It is a crying shame, but harsh reality, that his contribution to the 102nd Dockyard Derby will be recalled, not for his many timely and sometimes brave interventions, but for a faux pas that allowed Kal Naismith to claim a first Portsmouth win over the Pilgrims after five winless encounters against Derek Adams’ side.

Naismith struck midway through the first half to edge a close-fought encounter when Matthews was caught out by a hopeful ball forward that left him stranded on the edge of his penalty area.

Adams had, unsurprisingly, made no changes to his starting line-up from the one that had eased to a 2-0 home victory over Northampton Town.

In the continued absence, through suspension, of Ryan Edwards, Yann Songo'o partnered ex-Portsmouth player Sonny Bradley in the centre of defence, which allowed Antoni Sarcevic to continue alongside another former Frattonite, Toumani Diagouraga, and David Fox.

A third Pompey old boy, Jake Jervis, led the attack again, having scored the Pilgrims' goal in the previous Battle of the Ports, a 1-1 draw back in League Two last April. Another former Portsmouth player – in the days before their spectacular fall through the divisions – Nadir Ciftci, was on the substitutes' bench.

For their part, the home side's three changes to the 11 that had begun the previous 2-1 defeat at Peterborough included dropping Argyle promotion-winner last season, Matty Kennedy, to a bench that also housed another ex-Home Park loan player, Drew Talbot.

Portsmouth were weakened front and back, with Brett Pitman injured and Christian Burgess suspended after picking up his fifth booking in the final game before the half-season amnesty.

The early stages of the game were cautious, certainly by the contest’s recent standards, although the support for both sides was well up to spec, with the home side’s constant reminder that they had pipped the Pilgrims to last season’s League Two title being rebuffed by the Green Army’s reminder that Portsmouth were, not so long ago, dining at English football’s top table.

An apparently unassuming little break from Fox gave Argyle a sniff of a chance before Portsmouth cranked through the gears. Matthews got the merest of touches to Brandon Haunstrup’s fierce shot on the angle after breaking down the left flank before Aaron Taylor-Sinclair blocked an equally potent shot from Gareth Evans.

Matthews then saved from Conor Chaplin, although the way the ball wobbled away for a corner suggested he was not in total control of the situation. A blooper of greater magnitude followed soon afterwards.

A ball from deep towards the Argyle penalty area brought Matthews from his goal but the pass fell short of the 18-yard box, leaving Matthews as a sweeper, rather than a ’keeper. Sonny Bradley was not proximate enough to affect the issue as Naismith nicked the ball off the Pilgrims’ custodian and rolled the ball the length of the penalty area into the goal.

Argyle’s response was measured and thoughtful, and they passed the ball around well. Only once before the interval, though, did they fully threaten to level before the interval, when Diagouraga threaded Jake Jervis through. Portsmouth goalkeeper Luke McGee read the danger, though, and came from his goal to just snuff out the danger.

Matthews’ composure was tested straight away after the restart, an obvious and expected tactic, especially given that the Argyle man had the Fratton End behind him, but he stood firm in the face of Naismith’s shot.

Better followed from the young custodian after Oliver Hawkins released Chaplin, who, forced wide, crossed for Evans, arriving at pace. The shot was all but point-blank, but Mathews somehow, brilliantly, managed to deflect the ball wide.

The momentum remained with Portsmouth as Argyle’s key men failed to get a firm enough grip on the game to effect much of an influence.

That changed immediately after the introduction of Carey, when the Pilgrims shifted into attack mode for a while, culminating in Bradley going close with – guess what – a far-post header of a Graham Carey corner.

As the game opened up, Naismith won a foot-race with the Argyle defence and dinked the ball past Matthews only to see it hit the post as the two players collided. Matthews clearly came off worst and – such is the narrative of the Pilgrims’ season regarding goalkeepers – struggled through the rest of the match.

Argyle, with Ruben Lameiras having replaced Carey and Lionel Ainsworth on for Sarcevic, sensed a nervousness among their hosts as the game reached its final stages and probed as well as they had during a frustrating afternoon.

Twice in added time, they gave themselves a chance of leveling, first when the ball dropped invitingly for Ciftci, who could not connect properly, and then when Taylor-Sinclair homed in on Sawyer’s cross but could not connect at all.