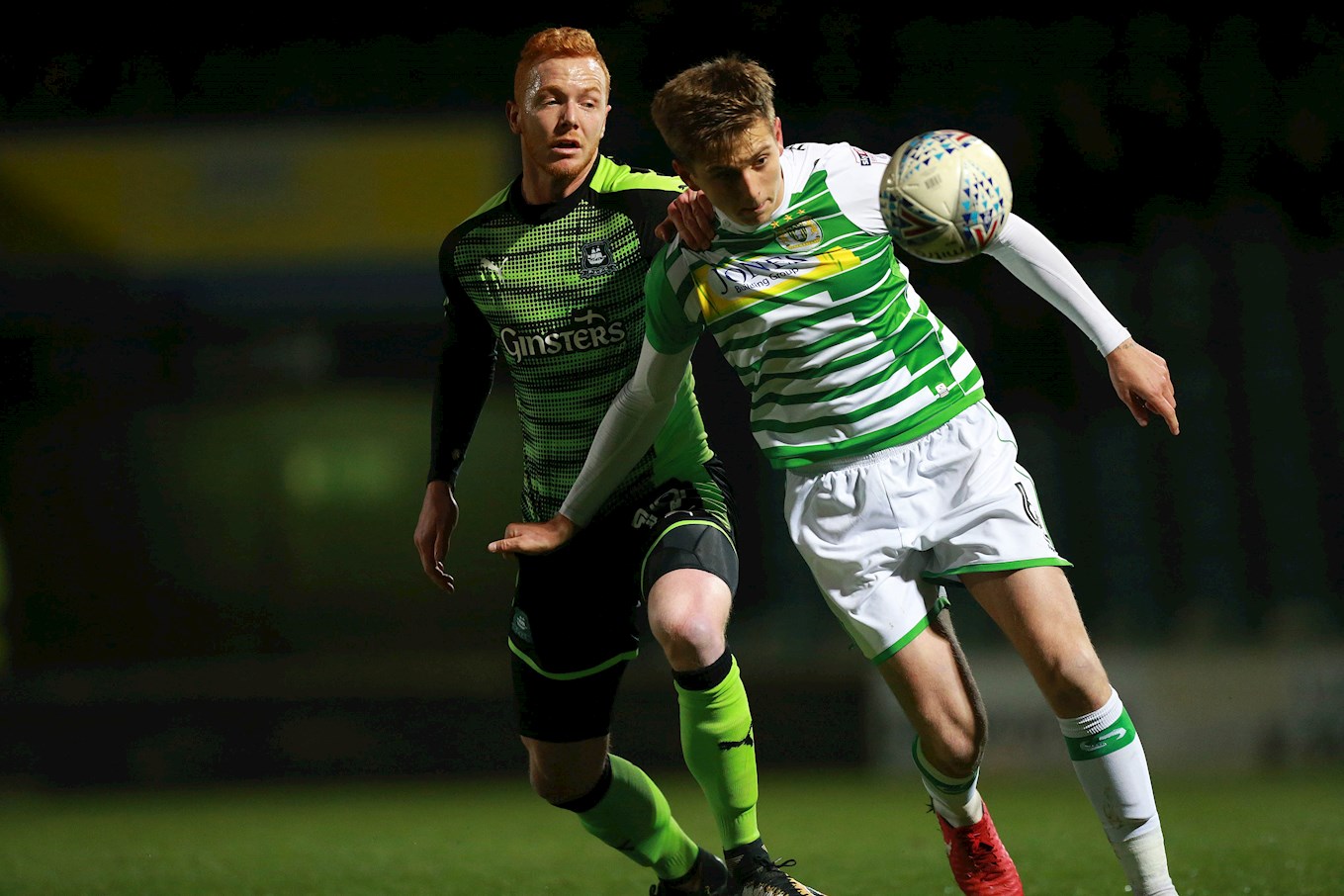 ARGYLE succumbed to a second-half fightback from the Sky Bet League Two neighbours to dip out of the Checkatrade Trophy after losing their final group game.

The Pilgrims led 1-0 at the interval, and were good value for it, Ryan Taylor marking his welcome comeback from injury by scoring in a dominant first half.

However, they found Yeovil a much different prospect in the second half and were pegged back by Tom James after an hour.

The game was heading towards a penalty shoot-out decider which Argyle would have had to have won to progress, when Sam Surridge made the tie-breaker unnecessary by snatching the winner with two minutes of the game remaining.

Argyle manager Derek Adams had made six changes to the side that had lost 1-0 at Portsmouth three days earlier, with the most notable names on the team sheet being those of Taylor and Oscar Threlkeld.

Taylor had not played any first-team football since the first 20 minutes of the season, at which point he broke his ankle at Peterborough; Threlkeld lasted around an hour longer before fracturing his fibula in the Carabao Cup tie at Bristol City.

Just behind the returning pair in the eyebrow-raising department was the name of Will Mannion, Hull City's 19-year-old goalkeeper, borrowed from the Tigers following the latest twist in the Pilgrims' custodian saga.

Mannion was Argyle's sixth gloveman following the return of his predecessor as a Home Park emergency loan, Remi Matthews, to Norwich City after becoming the fifth Pilgrim goalkeeper to suffer injury this crazy season.

Also back, in a five-man defence, were Gary Miller and Ryan Edwards, who missed the previous two EFL games through suspension but would have been available for this one anyway under the rules of the competitions.

Alex Fletcher was drafted in to partner Taylor in a two-man attack, just ahead of Graham Carey, who captained the side for the second time this season.

Yeovil made five changes to the side that had lost 2-1 at Wycombe Wanderers, including a recall for midfielder Connor Smith, a promotion-winner with Argyle last season.

Taylor had already demonstrated the qualities which the Pilgrims have badly missed in his absence - holding the ball up; holding off defenders; bringing his team-mates into play – before he capped a dominant first quarter of an hour by Argyle by opening the scoring.

Edwards began the move, switching playing from the right-back position to the left wing with a 40-yard diagonal pass that was bang on the money for Aaron Taylor-Sinclair.

The left-back cut inside his marker and rolled the ball back for Taylor, whose swinging shot on goal was not the cleanest, but he had bought a ticket and duly won the raffle when Yeovil goalkeeper Artur Krysiak could not deal with the ball.

The early goal obliged Yeovil to come at Argyle to, at best, avoid a midweek trip to Buckinghamshire or, at worst, be knocked out after going into the final round of matches topping the group, and they gave the new-look Argyle defence a little test.

It was the Pilgrims who came closest to scoring the second, though, when Fletcher burst through and fired off a shot at Krysiak’s near post which the goalkeeper and a defender combined to deflect for a corner.

Mannion’s most potent enemy up until that point had been the bitter Somerset weather but he was called into action just before half-time when Jordan Green made ground down the left and found Olufela Olomola for a shot that was just this side of comfortable for the young keeper.

The more potent breaks were Argyle’s, though, and another good overlap from Taylor-Sinclair saw Keston Davies hack his Fletcher-seeking driven cross over the bar for a corner from which Yann Songo’o headed just over.

Songo’o was to the fore at his more natural end after the interval, at which Yeovil brought on two substitutes and reshaped, blocking a goalbound shot by Davies from a corner which the Pilgrims had conceded when they dealt with a shot from one of the replacements, Otis Khan.

Argyle morphed to take into account Yeovil’s switch but the home side continued to ask questions. Alefe Santos found Zoko with a sweet ball that put him in one on one with Mannion, whose speed from his line to narrow the angle forced the Glover to play the ball early and his lob looped wide of the post.

The momentum had shifted to the home side and they made it count when the second of the half-time subs, James, headed home a free-kick taken by Khan from the Yeovil left to claim his first Glovers’ goal.

The home side continued to take the game to the Pilgrims, who had replaced Fletcher with Jake Jervis in the wake of the goal, and who survived claims for a penalty when a tangle between Edwards and Zoko ended with the Town man on the deck.

Events at St James’ Park meant that a draw, on its own, would not be good enough for the Pilgrims to make progress in the competition but they were not finding it easy to get within range of the Yeovil goal.

They sent on Lionel Ainsworth and Gregg Wylde to counter the pace of Yeovil, who had more claims for a penalty waved away by Huxtable when Olomola went down in the box.

The impetus saw them win a free-kick which Carey slung all the way toi the far post, where Thrlekeld ‘s powerful shot was saved.

With thoughts being turned towards a penalty shoot-out, Olomola crossed for Surridge to end the Pilgrims’ participation in the competition.