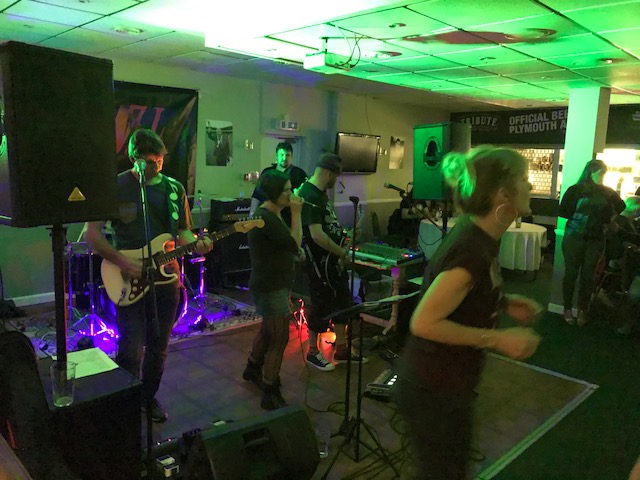 OUR original run of Band Nights in the Tribute Legends Lounge at Home Park has proved so popular that we are extending the run!

We have lined up another collection of great local acts for you to sing and boogie along to. Entry to each gig is free of charge.

Booked in so far are:

We anticipate adding more to the line-up in time. We are, in particular, looking for an irish act for St Patrick's Day. Any suggestions or applicants can be sent to emily.drew@pafc.co.uk.

Here is a little more about each act:

Dakota Blues: Dakota Blues are a fresh, energetic Devon based five-Piece Function Band, who play songs from across the board such as Valerie, Get Lucky, Superstition, Disco Inferno, I Wll Survive, 9 to 5, Let’s Dance, Livin on a Prayer, Lady Marmalade, plus many more.

Smokin Locos: Very popular local blues singer/songwriter Russell Sinclair never fails to put on a great show. If you’d like to see more about Smokin Locos you can visit their website at russellsinclair.co.uk.

Barracoodas: Barracoodas play classic and contemporary rock and punk covers, from the late 1960s through to the current day. AC/DC, Green Day, Pink Floyd, Hendrix, Radiohead, The Cult and loads of others.

Firebird: Already recognised as the most significant new introduction to the music scene in Plymouth since their forming in 2016.  Playing exclusively music from the era that spawned them, these dedicated and rambunctious artists delve into the vast back catalogue of the 1980s and, to the unfettered delight of their audience, are able to transport us back to an era where life was thrilling, glamorous and captivating.  Examples of the artists who feature in Firebird set lists are: Alice Cooper, Billy Idol, Bon Jovi, Bryan Adams, Huey Lewis and The News, Def Leppard, Duran Duran, Cutting Crew, Van Halen, ZZ Top, Queen, Guns 'n' Roses, Micheal Jackson, Motörhead plus many more - including a few surprises and unexpected gems.

Rebel 47: So popular we have invited them back! We are going to welcome back Rebel 47 after a successful gig already played in the Tribute Legends lounge. Eclectic mix of rock and pop covers by a female fronted band.