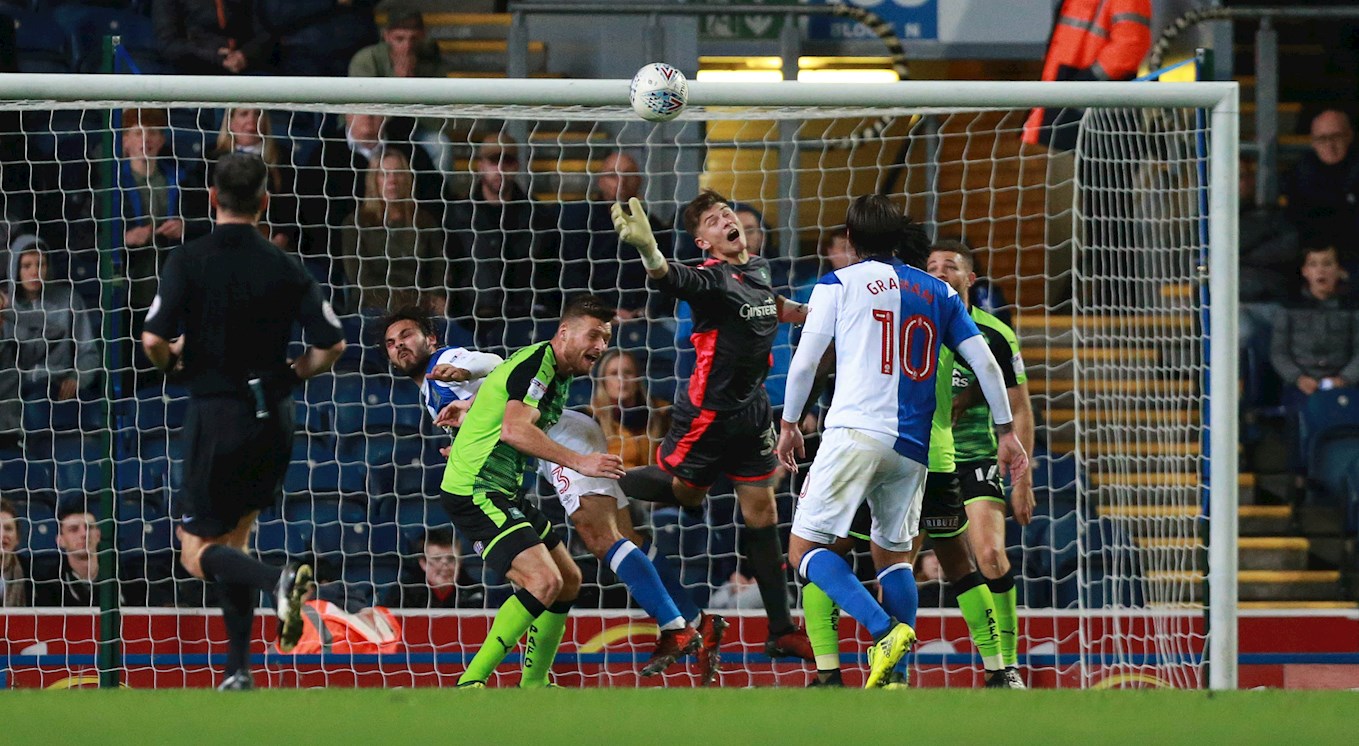 ARGYLE took a tremendous point from their second successive 1-1 draw, achieved in the most adverse of circumstances as their injury jinx hit them again at Ewood Park.

After taking the lead through another Graham Carey special on the half-hour, goalkeeper Kyle Letheren suffered a leg problem which saw apprentice Michael Cooper take over between the posts following Bradley Dack's leveller for Rovers on the pip of half-time.

Cooper the Keeper and his team-mates rose to the occasion, however, and the Pilgrims were not to be denied their share of the spoils as they showed their fabled resolve.

Argyle manager Derek Adams had made two changes to the starting line-up from the previous Saturday’s Home Park draw that toppled Shrewsbury Town from the leadership of League One.

Antoni Sarcevic limped off against the Shrews and was unable to travel, while young Alex Fletcher, who pretty well ran himself into the ground, was rested. Ex-Rover Yann Songo’o moved up to occupy Sarcevic’s midfield berth with Sonny Bradley recalled to central defence, and Jake Jervis was handed the main forward role, flanked by Carey and Joel Grant.

Ruben Lameiras was also absent and, even though Lionel Ainsworth returned to the squad following a three-week hamstring lay-off, Argyle’s unavailable list was so long that second-year apprentice Cameron Sangster was called into the Pilgrims’ party.

Rovers came into the game on the back of a 1-0 away defeat by an Oldham side who scored in the last minute to underline their resurgence since parting company with former Argyle gaffer John Sheridan.

Manager Tony Mowbray freshened things up from that Lancashire spat by bringing in Scottish international Danny Graham, Ryan Nyambe and Dack, who they paid Gillingham £750,000 for in the summer, in place of Dominic Samuel, Craig Conway and former Pilgrim Elliott Ward.

It was the least known and least expected of the recalled trio who had an early opportunity to open the scoring, home-grown centre-back Nyambe finding the ball at his feet close in on goal from a corner but snatching at the chance and firing the ball over.

Argyle’s first foray forward was not long in coming and Jervis linked well with Carey, whose left-footed chip from close to the bye-line was just a little too impudent and, in beating goalkeeper David Raya, dropped on top of the goal.

Carey, who seems to be enjoying a resurgence of his own, repaid the favour minutes later, tracking back to dispossess Elliott Bennett and feeding Jervis for a shot that needed a deflection to allay Raya’s concerns.

That preceded a spell of Rovers possession that tested the Pilgrims’ resolve and ability to keep their shape under pressure. Twice Dack was picked out by decent crosses from deep on the flank only to be unable to find the finish that the deliveries arguably merited, and Richie Smallwood also erred on the side of profligacy.

No such accusations can be laid at Carey’s door right now. After the previous Saturday’s splendid strike to scupper the Shrews, he dipped into his box of tricks again to put Argyle ahead.

There were similarities between the two goals. There seemed little danger to the Blackburn goal when the Irishman contested possession of the ball 30 yards from goal but, his mind and feet working in perfect unison, he was soon jinking his way through the close attentions of three defenders.

That gave him the half a yard of space that he need to cock the trigger and let loose with a measured shot that had just enough curl to take it away from Raya.

The old saw that goals change games was never better illustrated. Blackburn slipped from a position of assured ascendency to one of jittery nervousness; a two-thirds empty Ewood Park went from buoyant to booing; and Argyle looked forward with a renewed purpose.

Not for long. The Pilgrims’ bubble was popped when Letheren stayed down after going down and such was his problem that signals immediately went out to the bench to young Cooper to get his gloves on. Letheren limped on but was unable to take goal-kicks.

It is a moot point whether or not a fully fit Letheren would have saved Dack’s shot from which Blackburn levelled two minutes into the four added on at the end of the first half – largely because of Letheren’s injury – but what was clear that he could not carry on after half-time.

Thus Cooper became the fourth goalkeeper, and 26th Pilgrim in total, to see first-team action this season, less than two weeks after his 18th birthday.

The fresh meat was, of course, preyed upon by Rovers, hungry to add to Dack’s equaliser; Argyle renewed their resistance to protect their young team-mate.

One way or another, Cooper remained a largely untested custodian: Marcus Antonsson shot over; Graham headed wide; Dack and Paul Caddis both had strikes deflected by defenders.

Cooper’s first save – and it would have been one that he would have expected to make – came 27 minutes into his debut, when he got down low at his near post to keep out an indeterminate shot from busy Rovers substitute Harry Chapman.

The home side upped the ante by replacing midfielder Dack with Dominic Samuel, a forward, but it was Argyle who next came closest to taking the lead when Carey broke the shackles and fired off another left-footer that Raya looked none too comfortable in dealing with.

Back came Blackburn, with Graham a long stud away from making contact with Bennett’s delivery before Cooper made his first vital contribution, tipping over Derrick Williams’ powerful close-in header with a smart reaction save.

If that was smart, what Aaron Taylor-Sinclair did in the last minute of injury-time was beyond genius. Chapman probed one last time and the ball deflected to Ben Gladwin, five yards out with the goal at his mercy.

Somehow, Sincy got his timing impeccably right to force the ball up and over the crossbar for a corner.