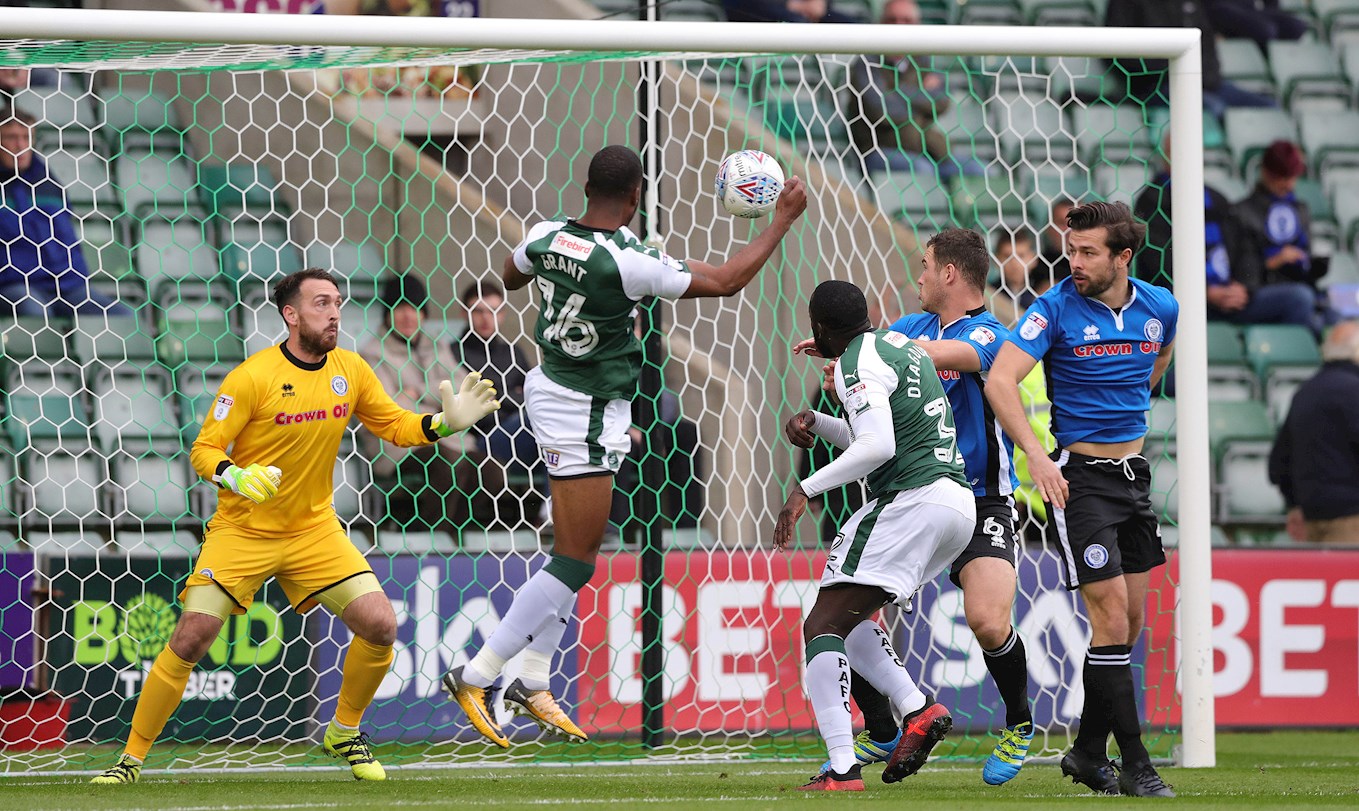 ARGYLE took their new-found habit of scoring first in games to extremes on their return to Home Park, with new-found goal-machine Joel Grant scoring after just 43 seconds.

Despite the early fillip, and another pleasing display, the Pilgrims had to settle for another valuable Sky Bet League One point after Matt Done leveled for away-day draw specialists Rochdale 12 minutes before half-time.

A fourth game unbeaten was not enough to lift Argyle off the bottom of the table but was further evidence that they have found their feet after last season’s promotion.

After the previous weekend’s victory at Wimbledon, Argyle manager Derek Adams saw no reason to change his starting 11 – and, indeed, had the somewhat rare luxury of not having to factor in fresh injuries or suspensions.

Thus, Argyle lined up with the same outfield ten that had not only cherry picked three points at Kingsmeadow but also, as impressively, had taken a share of the spoils from their visit to Blackburn Rovers four days earlier.  The only change between the two lines-up was between the posts, with goalkeeper Remi Matthews having come in on an emergency loan from Norwich to replace Kyle Letheren – injured, naturally.

Rochdale, managed by former Pilgrim Keith Hill, had suffered just one defeat in their previous six games and arrived in the Westcountry buoyed by a home win over Bristol Rovers, so it was no surprise that they, too, were unchanged.

To say the Pilgrims carried on where they left off in South London would not be entirely accurate, for they ended that 90 minutes defending deep and repelling some desperate Dons’ attacks.

Back at home, they were straight on the front foot and took the lead while the strains of Zombie Nation – the player’s choice of pump-up music – were still hanging in the Home Park air.

The goal, though, involved the same personnel in the same capacity as the Wimbledon winner. Graham Carey’s rich vein of form – he had either scored or assisted each of the Pilgrims’ previous four strikes – continued as he skinned Joe Bunney (aka the Man Who Nearly Put Argyle Out of the EFL) to make the right-hand bye-line and clip the ball to the far post.

Grant was waiting and took advantage of Rochdale’s back-pedaling as they attempted to quickly familiarise themselves with their surroundings, rising unmarked to plant a firm header back across the goal into the corner of the net. The perfect end to the perfect start.

Rochdale’s away campaign had included three 0-0 draws so you suspect their game-plan was wrecked, which guaranteed that they would have to come at Argyle.

They did. However, the Pilgrims’ own game-plan – recently, at least, and certainly last season – sometimes allows for the opposition to have the ball, as long as it is in front of the Green wall in which Yann Songo’o has been so prominent of late, and then hit them on the counter.

Matthews, therefore, had little to worry about, unlike his counterpart, Josh Lillis, who had to beat out a 25-yard Carey free-kick, and was similarly well-protected by his defence from well-delivered corners by the Irishman and Jake Jervis.

For all their probing, Rochdale’s equaliser was flavoured with a huge slice of fortune. Jordan Williams’ shot from distance was scuffed and barely threatening, but Done inadvertently found himself in its path, stopped the ball, swiveled, and shot home from five yards.

The ten minutes to half-time saw one more chance for either side, with Grant again finding himself well set up. This time, the provider was Songo’o, whose delightful pass fell invitingly but the chance was well snuffed out by Lillis.

Rochdale started the second half in the same manner as Argyle had the first, with Done obliging Matthews to  cover his near post and make his first meaningful save at Home Park.

Argyle’s riposte was instant. Carey drew yet another foul from Bunney, who had earlier been booked for his too close attentions on the Argyle No.10, and took the kick himself from wide on the right.

He swung it in low to Lillis’s near post, trying to catch him napping, and almost did, with the ’keeper  scrambling to parry the ball, which then slipped from his grasp and span towards the goal before he grabbed it on the line.

The near-thing spurred both sides. Dale nearly did Argyle through Done again, but Matthews was equal to the effort, before the Pilgrims, who were getting forward well, put the Devonport end goal under a mini-siege without getting a clear sight of the target as the visitors defended manfully.

Dale replaced red-card-in-waiting Bunney with Kgosi Ntlhe whose first significant contribution came at the attacking end of the field when he cut back the ball for Ian Henderson to take a shot that was blocked by Sonny Bradley.

Argyle were obliged to re-jig when Grant was crocked, sending on Nathan Blissett, whose presence immediately bothered Dale not least of all when he helped retrieve a Lillis spill and feed Fox for a cross that was smeared wide by Carey.

The Pilgrims further signified their intentions to go for the win when Fox was withdrawn in favour of Antoni Sarcevic and, later, when Gregg Wylde replaced Jervis.

Wylde was soon in the thick of things, firing over after more good work on the right flank from Carey, who was given the opportunity to further carve his name in Argyle folklore from a 20-yard free-kick in time added on.

He wisely elected to try to find a team-mate but Dale held out, with the tame ending rather a contast to the electric beginning.