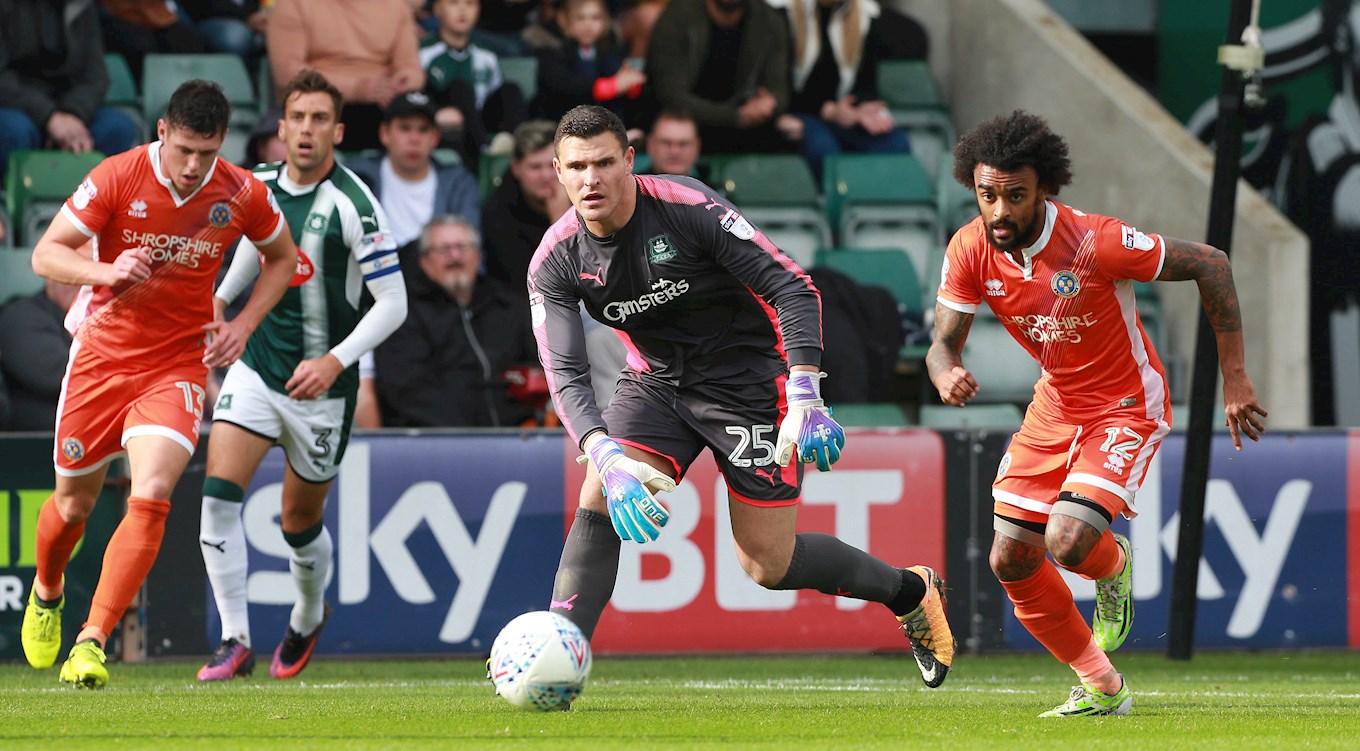 SHREWSBURY recorded their 13th game unbeaten in this season's Sky Bet League One - but they may not have expected it to be such hard work against an organised, spirited Argyle side 23 places beneath them.

The Pilgrims soaked up any early Shrewsbury intent with ease, played their way into the game, then led through a stunning Graham Carey strike around the hour mark. For 20 minutes, the Green Army dreamed of a first win in two months, in 11 league games, but it was not to be.

Shaun Whalley's precise finish with a dozen minutes remaining gave the leaders parity - and injected some life into them. They looked more likely to win at the death, but Argyle hung on gamely to get a point they thoroughly earned.

Derek Adams had decided not only to bring in the newest Pilgrim, Toumani Diagouraga, to the starting line-up, following his signing on Monday, but also to call four others into the starting 11.

David Fox joined Diagouraga in the centre of Argyle's midfield; Joel Grant replaced Gregg Wylde on the left flank; Alex Fletcher started up front in place of Nathan Blissett; and Aaron Taylor-Sinclair started the game at left back, with Gary Sawyer starting at right back, with Oscar Threlkeld out through injury.

Antoni Sarcevic was the third man in a packed Argyle midfield, with Graham Carey starting the game wide on the right. Sonny Bradley, back in the squad following a three-game suspension, had to settle for a place on the bench.

Argyle set out a stall early on to try to absorb Shrewsbury possession, and limit the areas in which the league leaders could play. The game fell into a pattern in the early stages where the visitors build from their back four and tried to steadily build towards goal, but the Pilgrims saw out the first quarter of the game with the minimum of fuss.

Such a containing attitude meant Argyle attacks were at a premium, and so when a corner found Yann Songo'o totally unmarked, his errant header felt even more profligate.

That said, in fairness to the in-form Songo'o, a header at the other end, defending a free-kick, was vitally important, with two Shrews waiting to pounce.

The game of cat and another small furry mammal (Shrews are not Rodents - did you know that?) seemed to to come to an emphatic end some ten minutes before the interval. Argyle had a long period of possession, relatively speaking, interupted by a swift break forward by Shrewsbury's Ben Godfrey.

Godfrey raced most of the length of the pitch, but when he seemed to enter the danger area he was dispossessed by a terrific challenge from the retreating David Fox. One suspects shrews see foxes as natural enemies, mind you.

Argyle, from an attack built by the Vulpine One, got the ball out to Carey eventually, who ripped a shot on target, but right down goalkeeper Dean Henderson's throat. Mitigating that, though, was the sun, blazing unseasonably above the grandstand, and affecting Henderson's vision. He saved, and pushed the ball away, but it was less than convincing due to this ocular interference.

The Pilgrims kept up the offence, and from an advanced free-kick that Shrewsbury failed to clear, Argyle came the closest to opening the scoring. A ball intended for Fletcher took a couple of diversions before ending up with Sarcevic, who did well to control and shoot on the turn, but his left-footed effort from the six-yard line was slightly elevated, and went centimetres over the cross bar.

It was the first part of a frustrating end to the half for Sarcevic, who had treatment for an injury shortly afterwards, and would depart before the referee's interval whistle, replaced by Jervis. Before the end of the half Argyle had time to see Carey put a free-kick on target, with the ball again shovelled away unconvincingly.

Five minutes after the break, rinse and repeat. The same combination of a Carey shot and a Henderson flap occurred, but that tells the half the story. Carey's gorgeous take with one foot and shot with the other was sublime, and would have out-Careyed any previous Carey goal.

Henderson's iffy afternoon continued as he smashed the kick straight out to Jervis, but his Shrews team-mates scrambled before Argyle could create a chance of note.

It was soon time for Shrewsbury to show their teeth for the first time. Shaun Whalley met a cross from the right with beautiful timing and glanced a header bound for inside the post. Kyle Letheren, though, was down quick enough to push it away, and his defence did the rest.

Finally, having sent enough warning jabs, Carey got one through the guard. Argyle had actually passed their way out of trouble on the edge of their own area, with Grant racing up the field to release some pressure. First he tried to play Fletcher in, then was foiled as he got the ball back, but the ball fell to Carey.

In echoes of a goal at Home Park against Yeovil Town last season, Carey took the ball in, beat a man as he feigned to shoot and then curled stylishly into the top corner from range. It was a gorgeous to open the scoring in any game from Champions League to Devon Junior Minor, but coming for an Argyle side in such need for a goal of any kind, it was celebrated as wildly as any goal has been for a fair old while.

Shrewsbury have not led the league for nothing, though, and they still managed to pick their way through the Green ranks. It took a good strike to do it; Whalley's precise effort found the bottom corner past Letheren's grasp, and suddenly momentum seemed to be with the visitors.

Adams brought on Blissett for Grant as Argyle shifted system again, with Blissett joining Jervis up front. The later drove over after a prolonged period in the Shrews' box, before Whalley met another cross at the other end, but Letheren held the effort.

Argyle were the ones clinging on, in truth, as three minutes of injury time elapsed, but in all more than deserved the point against the only remaining unbeaten side in the EFL.