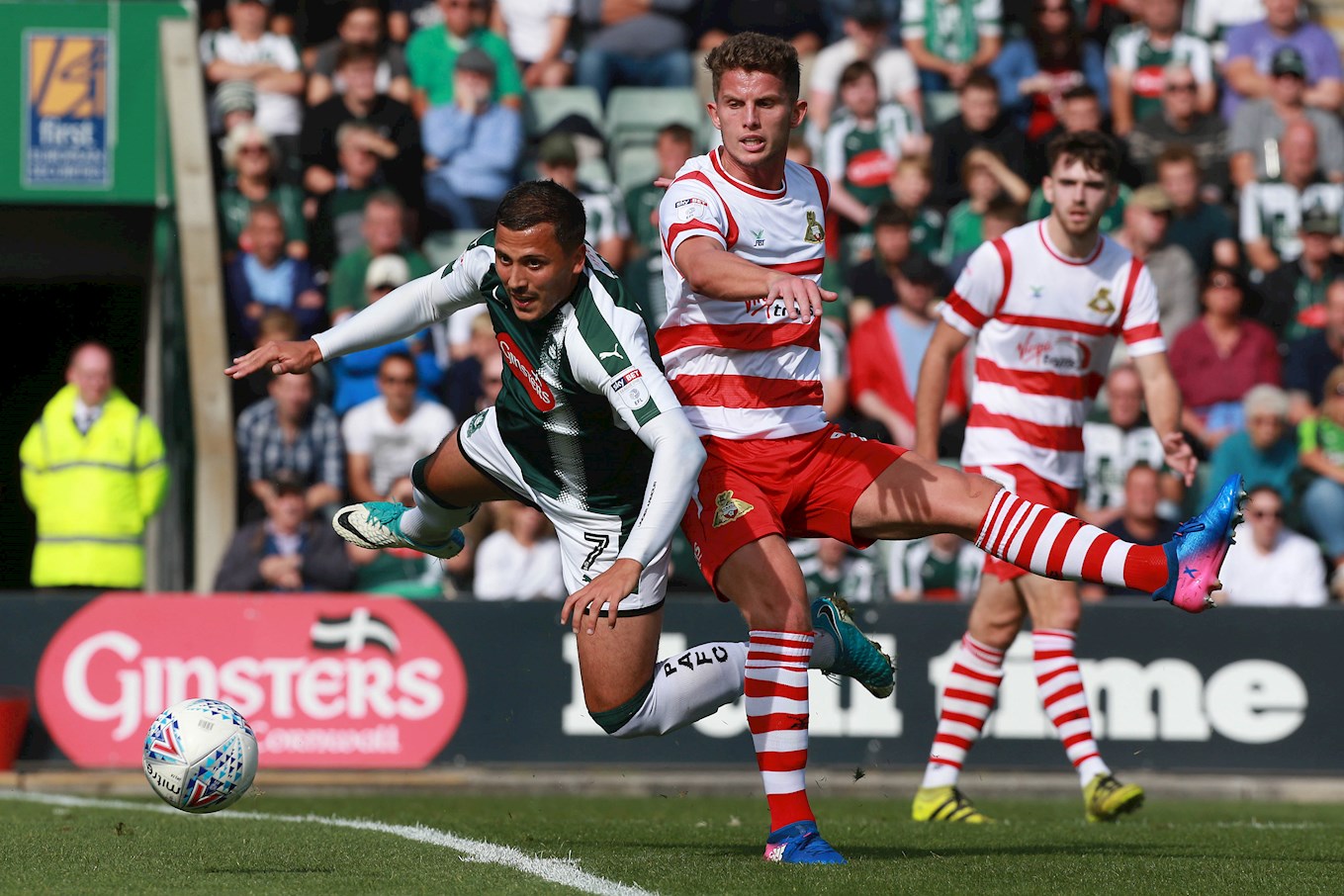 ARGYLE and Doncaster, two teams that were promoted last season, met at Home Park with each side looking for a win to jumpstart their season. Without wishing to spoil the end of the tale, and tell you which side achieved their goal, Argyle remain second from bottom of the league.

Doncaster, though, leap four places, and extract a modicum of revenge on a side that finished above them in last season's league, and who got the better of them over 180 minutes in that campaign.

Goals from Andy Butler, John Marquis and Alfie May saw Doncaster to a comfortable three points, with Sonny Bradley creating an unwanted piece of history in getting himself sent off, becoming the four Argyle player in succession to be red carded at Home Park.

The two teams met at the Theatre of Greens last year under different circumstances. First and third in Sky Bet League Two, they had lost nine games between them, in total. That was the same for this season's fixture, with the big difference being the fixture was about 80 days earlier in the calendar.

The notable aspect about each fixture last season was that Doncaster were the team who spent easily the most time in possession, but failed to score at all, with Argyle emerging 2-0 winners at Home Park, and 1-0 victors in Yorkshire. Those games seemed to be a challenge to Derek Adams, who dug into his competitive spirit and tactical knowhow to concoct plans for a strong Donny side - and it worked, twice.

It should be no surprise, therefore, that the team selection here was...well, a surprise.

First, the personnel. Ruben Lameiras and Alex Fletcher were in the line-up for their starting debuts, with Ryan Edwards returning following suspension. David Fox was possibly the most notable player to drop to the bench, along with Lionel Ainsworth and Joel Grant.

Next, the system. Pre-match guesses indicated that Adams would either play a diamond midfield to match Doncaster's preferred approached, or play with three central defenders, as was started against Blackpool, 11 days earlier.

Neither guess was correct. Adams opted for a three-man frontline, with Nadir Ciftci and Lameiras flanking Fletcher.

There were early signs of the new dynamic paying off. More than once Lameiras and Fletcher seemed on a similar wavelength, and but for the bounce of a ball or a slight chance in weight of pass, might have fashioned a chance to break the deadlock.

For Argyle, there were sadly similar signs to games of late. Possession, good enough positions crafted, but little in the way of penetration. Instead, Doncaster begin to get increasingly into good areas, and from the third of a trio of quick-fire corners, they went ahead.

Last season, Butler's afternoon at Home Park was a day to forget. A good defender, having a bad day, he slipped to let Graham Carey in to grab Argyle's opener, then brought down Ryan Donaldson for a penalty converted by Jake Jervis.

This time, Butler was able to react the quickest to a loose ball in the six-yard box, leaping headlong and turning the ball home with a flick of his head. In another familiar trope, Luke McCormick had made another terrific save, this time from Alfie May, and pushed the ball onto the crossbar, only to see Butler react first.

Argyle tried to counter quickly, with Fletcher taking a snapshot that went not far over, but the goal had once again dulled the noise of the until-then super-loud Green Army. In turn, the men in green on the field seemed a little jaded by a familiar scoreline.

Antoni Sarcevic came the closest to waking up the proceedings, making several incisive runs then, from one of them, cleverly chipping a stranded Ian Lawlor. It was typical of the Pilgrims' luck of late that the ball landed on top of the net, as opposed to under the crossbar.

Chances were at a premium, at both ends, with niggle and cards being the most talked about events. For Argyle, it was a mercy that cards shown were yellow, but it would have been a concern for Gary Miller, Lameiras and Songo'o to all be cautioned. There was humour in the latter, though. Songo'o's crime was a foul on former Argyle loan player Jordan Houghton, who had to ben treated by the Rovers physio. After recovering, and limping to the sideline, he faced some catcalls from the Lyndhurst stand, who obviously considered Houghton's reaction a little theatrical. His response was sarcastic applause towards the Green Army. Referee Nicholas Kinseley obviously regards sarcasm as a low form of wit, and cautioned Houghton.

At the break, Adams withdrew Songo'o and replaced him with Fox, with the Pilgrims switching to a diamond midfield, with Lameiras now in behind a front two of Ciftci and Fletcher.

As a side that have had three consecutive red cards at home, this might have been the point where wags were anticipating when the fateful, maybe fatal, red may come.

In fact, it should have come to May. The Doncaster man's two-footed lunge when reaching for the ball was at least as bad as, almost certainly worse than, the tackle for which Carey saw red and got a three-match ban that Argyle are still paying for. Perhaps the fact that no Argyle player rolled around in real or fake agony let May off the hook.

Inevitably, May had an involvement, albeit small, in Doncaster's second goal. A right-wing corner was headed by Joe Wright, who had wriggled free of his marker, at goal. McCormick should have made a reasonably regulation save, but he spilled the ball. May poked the ball, which hit McCormick in the face, and rebounded to Marquis, who prodded home.

Adams brought on Gregg Wylde and Lionel Ainsworth, wingers both, for right-back Miller and midfielder Ness, creating a hitherto unseen 3-2-3-2 formation. It was a show of intent, but it meant gaps were appearing everywhere at the back.

May pushed home another loose ball, but was cut short in his exuberent celebrations by an offside flag. Not long afterwards, he got to celebrate for real. Doncaster sub Rodney Kongolo slid a ball beyond Argyle's back-line, which May was just able to get something on, and divert it into the corner of the net.

To make Argyle's miserable day - season? - complete, they did indeed lose a man. Butler grabbed hold of Bradley's shirt, potentially risking a penalty kick, as the ball was in play. Bradley's reaction was to swing a left hook at Butler. He barely connected, but that is not the point - the referee's decision had been made very easy.

As had Donny's day. They coasted to victory, while Argyle suffered another goalles, pointless day.