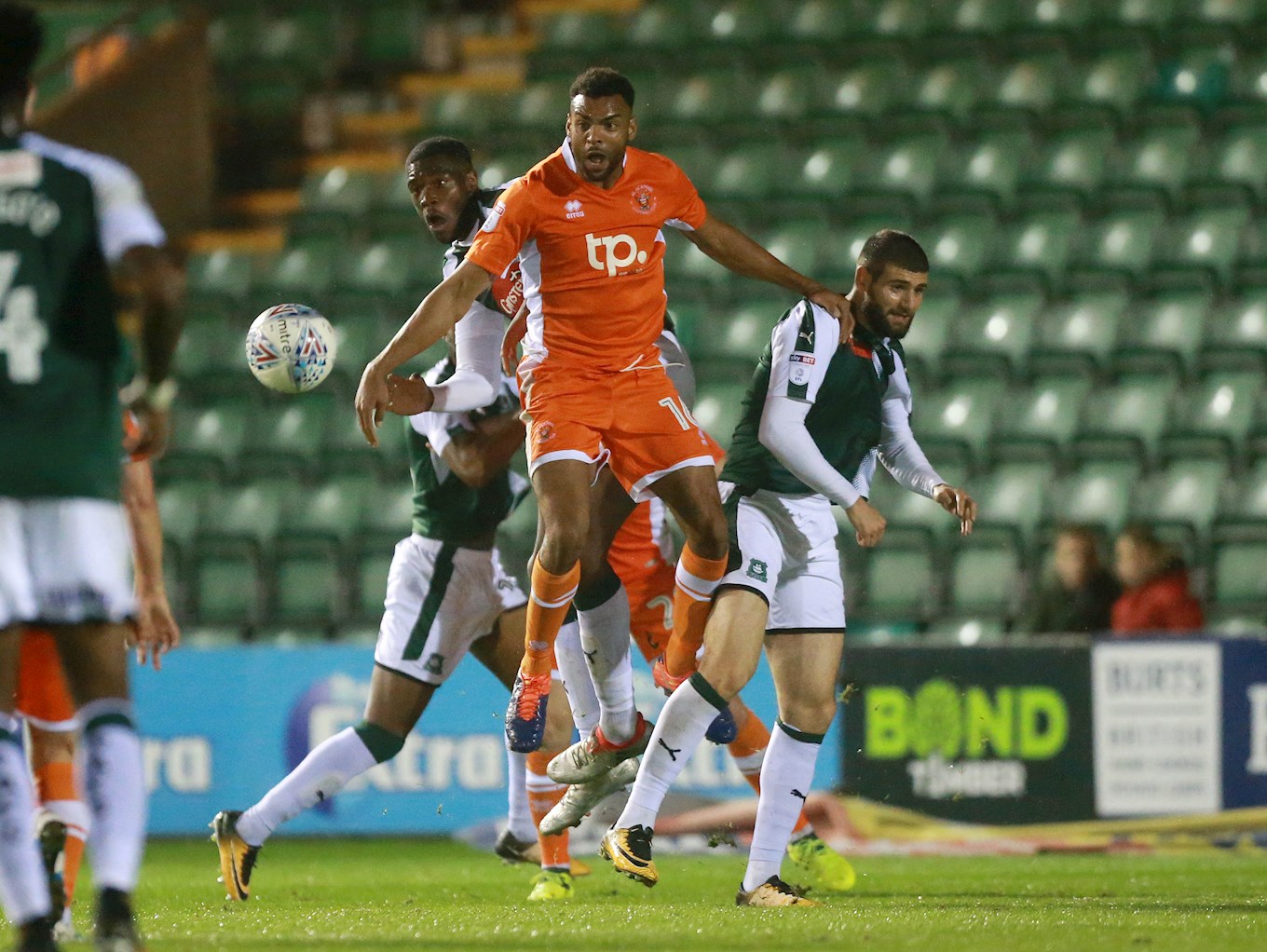 The Pilgrims looked to have turned their luck around when Sonny Bradley equalised early in the second half, following a heavily deflected Blackpool opener inside two minutes.

However, when Argyle lost defender Ryan Edwards to a second caution, Blackpool seized the initiative back, and scored long-range efforts from Jimmy Ryan and substitutes Nathan Delfouneso to seal the points.

Argyle manager Derek Adams was forced to make at least one change from the team that suffered a 1-0 defeat to MK Dons on Saturday after an appeal over Graham Carey’s suspension was unsuccessful.

Adams added Yann Songo’o and Nathan Blissett to his line-up for the aforementioned Carey and Jake Jervis, who dropped to the bench.

With rain increasing across west Devon, and the force of Storm Aileen sweeping the precipitation in at a rate of knots, Derek also shifted his system, and style of play. Blisset joined Nadir Ciftci up front, with Joel Grant just behind them, while Songo’o slotted between Edwards and Bradley in a back three. Argyle would play much more directly, too.

Blackpool were looking to continue their run of form by taking all three points on the road to total six games unbeaten in Sky Bet League One. Their previous outing saw them play out a goalless draw with Scunthorpe United, who sit just above the Seasiders in the league table.

Manager Gary Bowyer played an unchanged eleven that took a point on Saturday. Home Park welcomed back Kelvin Mellor but in opposition colours as the player is now in his second season with Blackpool following his departure from Argyle.

For all of Adams’ plots and plans, Blackpool took the lead within two  minutes, with an increasingly trademark piece of Argyle bad luck. A speculative Colin Daniel shot from around 25 yards out took a deflection off of Gary Miller which completely wrong-footed Argyle goalkeeper and captain Luke McCormick.

With the rain driving down Argyle were finding it difficult to get out of their half and create anything meaningful, initially. After the goal went in, Blissett laid off to Gary Sawyer who managed to win a throw deep in the Blackpool half but the Pilgrims were unable to convert the ball in.

Blackpool looked to double their lead, and thought they had a sniff of getting beyond the Pilgrims, but Songo’o was bailed out by colleague Bradley, who covered well.

Adams made the call midway through the half to shift Songo’o into a midfield role, and suddenly the game changed. With the Greens playing a narrow four in midfield, suddenly they took control of the ball, and the match.

Argyle looked like they were breaking their first half goal deadlock – they are still yet to score in an opening period this season - when a David Fox corner was whipped in across the goal but unfortunately both Blissett and Bradley failed to stick the ball in the back of the net.

McCormick was forced to make a scrambling save when Kyle Vassell got his head on a Blackpool cross, and then immediately the goalkeeper punted the ball long to Nadir Ciftci, whose control was sublime. In an attempt to chip Allsop the ball ended up over the bar.

A good spell around half an hour into the game saw a free-kick taken quickly by Fox to Ciftci but the Turkish forward was called offside. The Pilgrims took the game by the scruff of the neck and maintained control from half an hour on creating chance after chance.

Jamie Ness was fouled in the final third resulting in a Fox free kick. The ball was whipped in hard and fast but Blissett got too much on the ball and could not keep his header down allowing the Green Army to witness it fly over the cross bar.

Songo’o produced an ambitious bicycle kick around forty minutes in but saw his efforts glide into the Barn Park End. More good play followed from Argyle which saw Miller win the ball in the Blackpool half. When his cross was cleared it landed at the feet of Songo’o once more; he shot powerfully, but wide.

A Ness right-footed volley just on the edge of the penalty area could do more than be swept up into Allsop’s hands, as Argyle closed the half on top, but still behind.

As the first half drew to a close the fourth official indicated three minutes of additional play in which time saw Edwards booked for a foul on Vassell.

As quickly as Blackpool had began the first half, so Argyle tried the same in the second. Sawyer played in a brilliant ball to Bradley whose powerful header was high and wide, from a good position.  The number 15 was frustrated, but soon made amends.

Ciftci’s powerful drive  could only be parried away behind by Allsop. Ness’s corner was swung in and Bradley once again rose to the occasion and got head to ball This time he directed his effort into the right side of the goal.

Further domination for the Greens as Songo’o shot but all Blackpool could do was put the ball out for a corner. A succession of corners for Argyle buoyed the Green Army,, who increase in volume correlated with their rise in belief, it seemed.

On 57minutes Sean Longstaff, a Newcastle United loanee who had proved prolific for Blackpool, replaced Sessi D’Almeida for the visitors.

Argyle wanted a free-kick for a challenge on Ciftci, then felt further wronged when Miller was cautioned for a foul at the other end. The free-kick from Vassell hit the wall and was cleared.

Argyle made their first substitution on 62 with Gregg Wylde replacing Grant and the Scotsman was involved straight away managing to win a corner down the left hand side of the pitch. The corner was then cleared with a diving header by Oliver Turton.

Blackpool broke, and Solomon-Otobar found himself receiving the ball and going on a run only to be fouled by Edwards. Referee Kevin Johnson showed Edwards a second yellow, and Argyle faced a familiar mountain.

The control the Greens had over the game was gone. As Adams tried to shake his team up he swapped Blissett for Jake Jervis on the 69th minute.

However, the man advantage was evident and culminated in a Blackpool goal just moments later. Ryan, the Seasiders’ captain, shot right footed into the bottom left hand corner from 20 yards, putting the visitors 2-1 up, and dealing a swift blow to the proverbial Argyle bread basket.

Blackpool managed the game from then on, going into the final 20 minutes a goal and a man up. The sting from the game had gone and Argyle did all they could to get the upper hand once more, but the man power opposite them was just too much.

Bowyer swapped Solomon-Otobar for Nathan Delfoueso. It now appeared to be a case of seeing the game out for Blackpool as the game seemed to have gone flat. Yet, Delfouneso was the man to kill the game off unofficial, getting clear and firing past McCormick from the edge of the area.

The faintest ember of hope came to Argyle in the form of an indirect free-kick awarded for a pass-back to Allsop. Fox flicked to Jervis who hit his shot hard and low but the 10 man wall along the line prevented the ball from crossing it.

The visitors were able to see the game out from then on and take three points and their unbeaten run to seven games. Argyle head to Greater Manchester on Saturday to try to kickstart their season.

And things have turned at Bury before, you know.