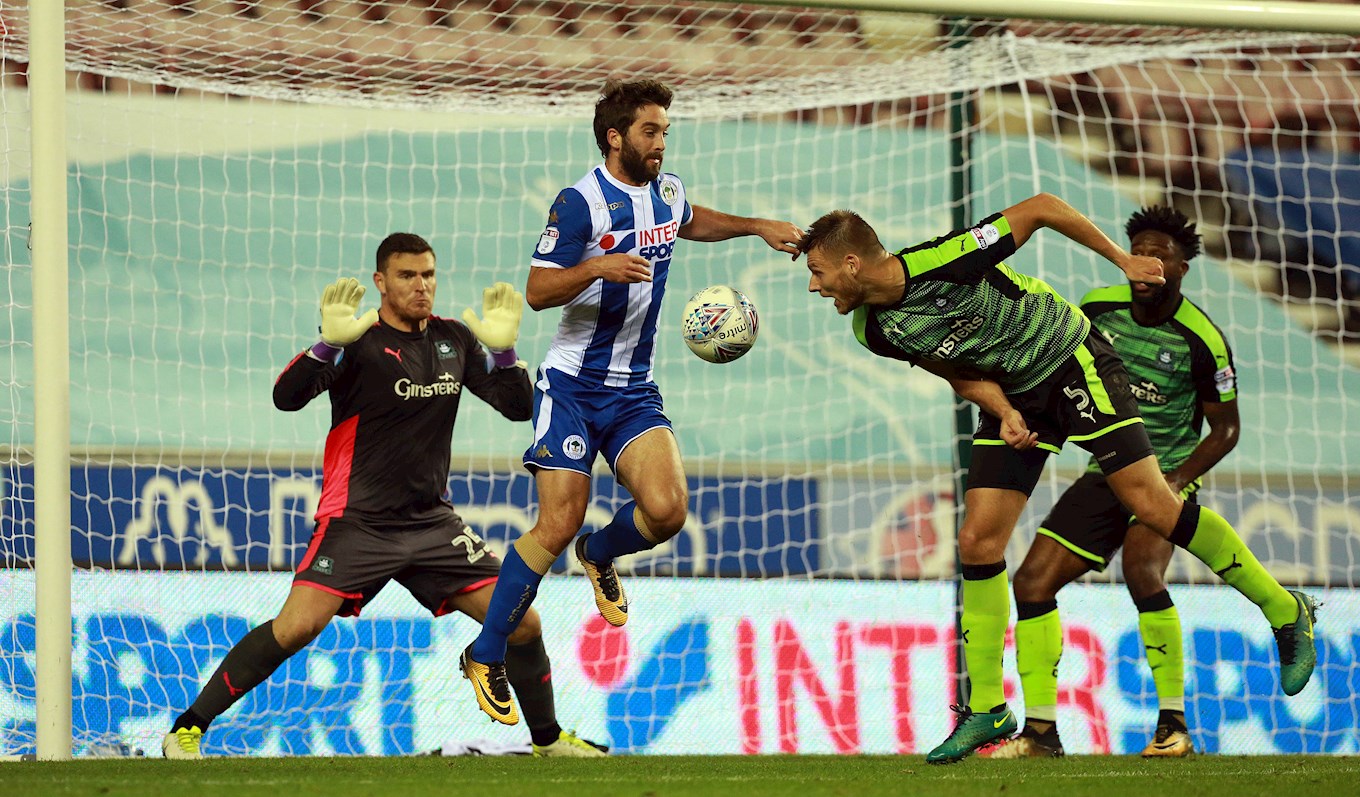 SOMETIMES you want to cry.

An Argyle side ravaged by injuries and suspension left Wigan with no reward for a gutsy defensive display after showing plenty of northern soul at the DW Stadium.

It took a soft penalty in the last ten minutes from Nick Powell to undermine their stubborn resistance against one of the division’s top sides.

It was probably the only way debutant goalkeeper Kyle Letheren was going to be beaten. The Welshman, deputising for the injured Luke McCormick, made several fine saves, and he was assisted by a pig-headed defence in which no-one was more brave or effective than Yann Songo’o.

Argyle had showed five changes from the side beaten 3-0 at home by Doncaster Rovers four days earlier. Two were enforced, with McCormick having reported lame after receiving knocks in each of the previous two matches and Sonny Bradley having been red-carded against Donny and suspended for three matches.

With No.1 back-up goalkeeper Robbert te Loeke also sidelined – the result of back problems – 29-year-old custodian Letheren was handed his Argyle debut, 2,972 days after first signing for the Pilgrims (a long story), while Songo’o dropped back to form a third different central-defensive partnership in as many matches alongside Ryan Edwards.

At the other end of the park, the entire front four was supplanted by a different quartet, led by – or more accurately,  anchored by – Graham Carey, back from a three-game suspension of his own. With McCormick, Bradley and Ryan Taylor all absent, it was good to see at least one part of the Argyle spine of 2016-17 on the field.

In the van, Nathan Blissett was preferred to Nadir Ciftci, who started as substitute for the first time since his loan move from Celtic in August, with Lionel Ainsworth and Joel Grant recalled to feed the big man from out wide. Alex Fletcher and Reuben Lameiras also stepped down.

Aside from a brief encouraging foray forward from the kick-off, Argyle were obliged to face up to a confident and talented home side. At times, it was necessarily all hands – and other body-parts – to the pump, with Songo’o making one vital block from Lee Evans’ drive.

The wall in front of Letheren was breached when returning Wigan captain Samy Morsy dinked a cleared free-kick back in behind the defence, with the ball being deflected by Will Grigg – not entirely voluntarily – past the wrong-footed ’keeper. As Letheren watched helplessly, the ball hit the underside of the crossbar and was cleared.

Grigg, assisted by Michael Jacobs, then fashioned a genuine chance for Gavin Massey, the former Orient man who has previous against the Pilgrims. His low shot was well saved by Letheren.

Argyle moments in front of the opposition goal were far fewer but they did come close to taking the lead against the run of the half when Edwards leapt to get decent contact on a Carey corner and send a header narrowly wide.

Then, after Massey had a deflected shot stopped by Letheren, Grant’s shot cannoned into the path of Ainsworth, who was unable to bring the bouncing ball down quick enough to let off a meaningful shot.

That was Ainsworth’s final contribution as he subsequently joined the long queue for the Home Park physio’s room, limping off with a leg injury, to be replaced by Gregg Wylde.

His was the second Argyle substitution of the first half. Minutes earlier, Gary Miller had been withdrawn in favour of Jakub Sokolik. Miller did not appear injured and the fact that he had already been booked and had committed two fouls following the yellow card might have had something to do with the decision.

The half ended as most of it had been played, with Wigan pouring forward and Argyle defending stoically, no one more so than Songo’o, who appeared to be actually enjoying flinging himself in front of the Latics’ shots.

As for Letheren, his first 45 minutes as Pilgrim ended with him diving to his left, full length, to tip a shot from Jacobs around the post. There is no higher praise than to say that the man who normally fills the position between the posts would have been proud of the save.

Letheren was immediately back in action when the second half began, twice tipping headers from Powell over the bar, although neither truly threatened to breach the obdurate back line.

Argyle had found it difficult to get themselves quickly up the pitch in the opening half but, with Wylde now on, that suit was strengthened. A one-two with Blissett sent the Scot streaking away on the left and, after driving into the penalty area, he released what fell somewhere between a shot and a decent pass to Grant, coming in at the far post.

The home side swapped Grigg for Ivan Toney just after the hour, and the tall on-loan Newcastle United man nearly scored with his first meaningful touch, a downward header of Nathan Byrne’s hanging cross to the far post which Letheren did well to keep out as it bounced up.

Cue another assault from the home side and another body-on-the-line block from Songo’o, who was left limping after laying down in the path of Massey’s piledriver.

Argyle’s final substitution, with 18 minutes to play, was a tactical one, David Fox coming on for Blissett. Carey pushed forward into the false 9 role.

So the pattern continued: Wigan jabbing, Argyle covering up. Then, just when you began to fancy getting something out of an unlikely situation, referee Seb Stockbridge saw a push on Jacobs, by Jakub, in the Argyle penalty area and blew for a penalty. Powell dispensed the opportunity with alacrity.

There was still life in the Pilgrims and they kept at it manfully right the way to the final whistle, Carey skidding a free-kick off the top of the crossbar in injury time.

“I give you all a boy could give you. Take my tears and that's not nearly all.”