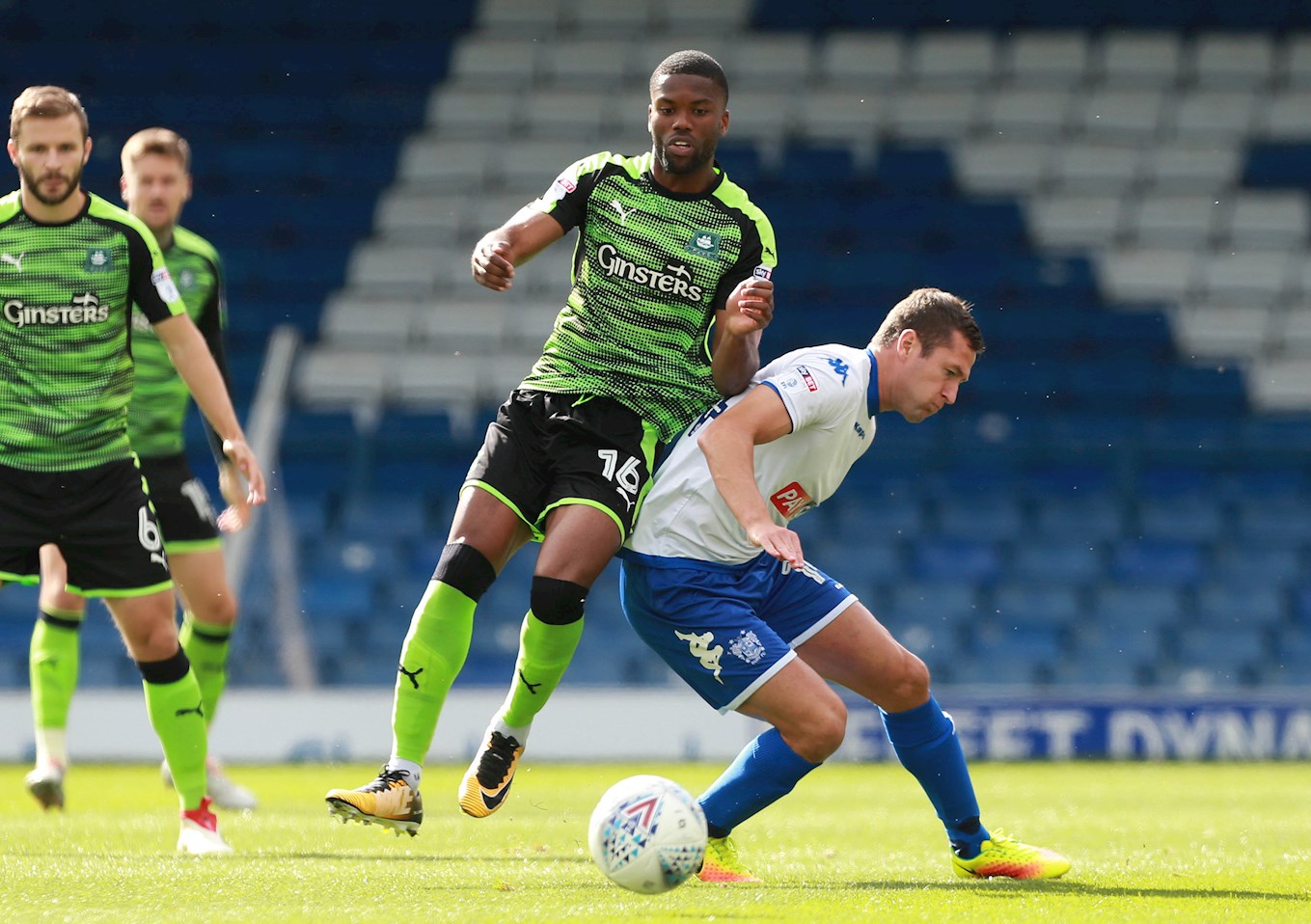 Match report for Bury vs Plymouth Argyle on 16 Sep 17

AFTER a crazy season so far, this was more like the Argyle we have come to know and love under Derek Adams: no own goals, no red cards, no goals conceded. Okay, no goals scored, either, but a point is a point and a journey of 1,000 miles begins with a single step.

Hero of the day was Luke McCormick, who made series of outstanding saves late in the game, this being no less remarkable for most of them being on made on one leg after he was hurt. Great heart, great talent, great determination not to be beaten.

Argyle had given winger Lionel Ainsworth a first EFL start since his summer transfer from Motherwell as one of two personnel changes from the side that lost to Blackpool at Home Park in midweek.

Ainsworth came in for the benched Nathan Blissett as Argyle switched from their horses-for-courses 3-5-2 formation used they used to attempt to combat the Seasiders and gale-force rain back to a more familiar one central forward in a 4-1-4-1 shape.

The second change was from necessity, rather than choice, with Ryan Edwards serving a suspension following his red card against the Tangerines. His place, nominally, went to Antoni Sarcevic – back after serving a ban of his own – with Yann Songo’o dropping back from midfield to partner Sonny Bradley.

Bury, better off than Argyle by one position and one goal goal-difference at the beginning of the day, made four changes, including dropping captain Jermaine Beckford and giving the armband to recalled defender Nathan Cameron. The trio of Jordan Williams, Mihai Dobre and Joe Skarz were all demoted to the bench, with Greg Leigh, Josh Laurent and Chris Humphrey coming in.

The first quarter of an hour passed by without any undue alarms for the Pilgrims. Luke McCormick was squarely behind a long-range drive from Laurent, and dealt similarly with a 30-yard free-kick from Chris Maguire. Given the dashed luck that Argyle have experienced with deflections this season, it almost counted as a pleasant surprise that neither hit the backside of a defender to be unintentionally diverted into the goal.

Argyle had showed plenty in the way of possession and containment but little in the way of overt menace but that changed when Jamie Ness broke through on the left and volleyed just wide of the goal behind which the Green Army were gathered in good numbers.

That might have acted as a spur to the home side, for who Humphrey was a lively conduit down their right. He first provided a cross from which Harry Bunn obliged Songo’o to hook the ball away from the danger zone and, after being booked for clashing with Gary Sawyer, delivered the ball on to the head of Michael Smith, who headed wide.

The Pilgrims responded with a sweet piece of individual skill from Nadir Ciftci, who lost his footing in collecting the ball with his back to goal but was still able to spring to his feet and send in a chip that goalkeeper Joe Murphy kept out at a stretch.

A better opportunity then came the way of Joel Grant, after some intricate passing play alos involving Sawyer and Ness. Played in, he drove into the six-yard box on the angle, opted for placement, and Murphy blocked.

Suddenly, Argyle were looking potent with every attack. David Fox played in Ainsworth with just Cameron to beat inside the penalty area, but, as he turned inside, the Shakers’ skipper just did enough to deny the Pilgrim.

In this season of bizarre goals, Argyle nearly conceded another one five minutes before half-time when Humphrey again picked out Smith from the right flank. Smith’s hack at the delivery sent the ball off at an unpredictable angle. It hit Cameron, whose astonishment at the ball falling to him five yards from goal was matched only by that of McCormick as it plopped into his hands, and the crowd, who could not understand why an offside flag had not been raised.

Smith was more accurate in Bury’s first attack of the second half, returning a half-cleared corner with interest, but, remarkably, his low drive through legs did not take a touch and McCormick read the on-target drive.

McCormick came to Argyle’s rescue again when Bunn won a free-kick deep on the left. With seven Pilgrims on the six-yard line and McCormick anticipating a cross to that area, Maguire tried – Graham Carey-like – to catch the ’keeper napping with a shot. McCormick just scrambled back and, with a strong wrist, deflected the ball away.

The Pilgrims subtlety switched tactics just after the hour, when Ruben Lameiras replaced Fox and fell back into the tried and tested 4-2-3-1 shape, and almost immediately introduced Alex Fletcher instead of Ciftci.

With both sides seeking the goal that would mean so much to their season, chances were at a premium. Lameiras had half a chance to break the deadlock when Murphy spilled an Ainsworth corner but his necessarily first-time shot was snatched and, consequently, wide.

Argyle twisted by sending on Jake Jervis (or ‘Jack Jarvis’, as the PA announcer called him) before Bury came within inches of taking the lead after substitute Dobre drove into the box from the left and crossed for Smith, whose first-time scooped shot hit McCormick’s left-hand post.

McCormick was then injured in a collision with Smith but, with Argyle having used their full complement of substitutes, there was no question of him coming off. Good job, since Dobre immediately tested him with a low drive.

Better was to follow from the now hobbling custodian when the lively Dobre this time found space for a shot of his own. The ball was arrowed for the far corner and apparently out of McCormick’s reach before Argyle’s captain stretched to tip the ball on to the post for a quite incredible save.

Unbelievably. more was to follow. In the final minute of five added on, Dobre again found space for another shot which the injured McCormick again saved, a great block which was followed up by another from Gary Miller as Rohan Ince fired the rebound goalward.