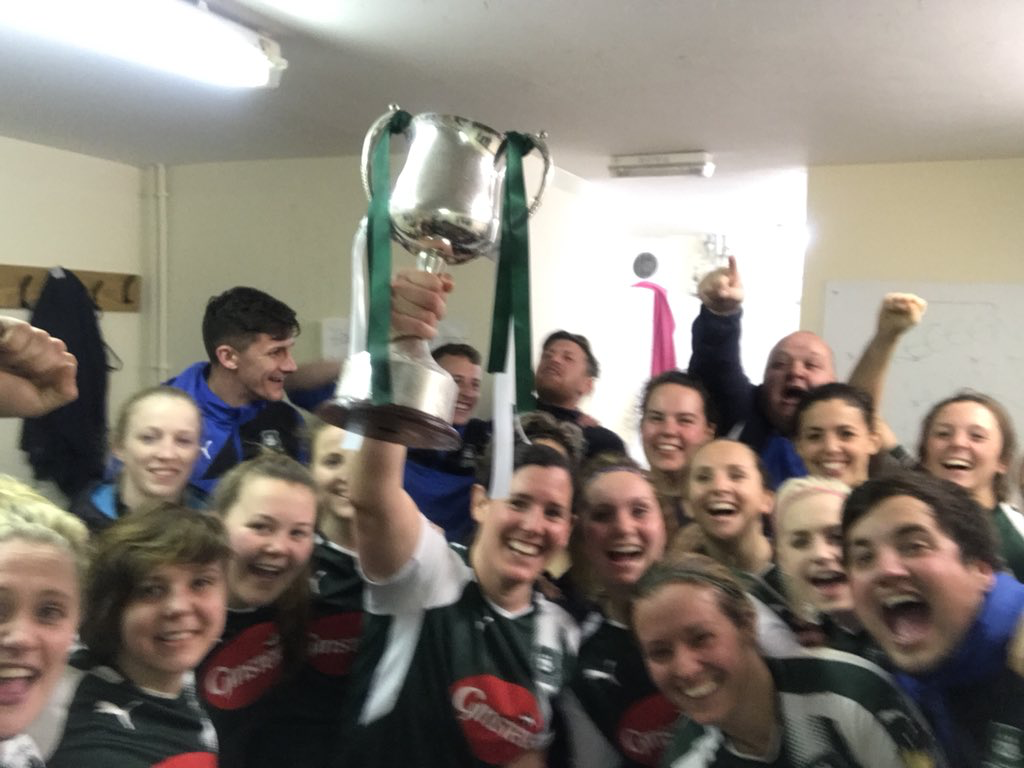 A TREMENDOUS Devon Cup Final at Coach Road on Friday night ended with a powerful victory for Plymouth Argyle Ladies over a battling Torquay United outfit.

Argyle ladies will be our special guests at Home Park this Saturday following their superb 8-0 victory over Torquay United in the Devon Senior Cup final.

The Pilgrims will be showing off their trophy at half-time on Saturday following Friday nights success at Coach Road.

In front of almost 400 enthusiastic supporters at the headquarters of Devon FA, the Pilgrims secured the title with two penalties, two hat-tricks and an unfortunate injury to the United goalkeeper.

Argyle had reached the showpiece event by defeating Buckland Athletic, Alphington and Marine Academy Plymouth, while United arrived via victories over Exeter City and a tense semi-final against Plympton Ladies.

The stage was set for a cracking game, with Argyle understandably strong favourites as they play in a higher league but Torquay United Ladies have grown immeasurably since their inception in 2013 and enjoying a fine season under the guidance of Vicki Fannon, Craig Kendall and Justin Grinsill.

From the start, Zoe Cunningham was a menace down the left flank for Argyle, regularly cutting inside on her favoured right-foot and a number of attempted passes for the darting runs of striker Natasha Knapman kept the United defence honest in the early stages.

Argyle captain Katie Middleton then had the crowd purring with appreciation after a wonderful 40-yard ball to the right flank, from where the eventual cross was expertly cleared by a retreating United defence.

The Gulls responded with their first real attack and the left-foot wand of Sarah Smith produced two delightful crosses that came within inches of picking out a United forward in the box.

The deadlock was broken on 12 minutes and Cunningham was again the catalyst, surging into the penalty box, where she was brought down for a clear spot-kick. Middleton calmly slotted the penalty just beyond the despairing dive of Beth Marshall.

United were now facing some serious pressure from the girls in Green and it required excellent defending to keep Argyle at bay, one special moment seeing full-back Adele Rogers pull off an incredible goal-line clearance for the Gulls.

Given their determined work at the back, the second goal was a little harsh on United, as Cunningham was again felled in the box for a penalty, although this decision was perhaps a little more questionable than the first.

Middleton again kept her cool to slot the penalty into the same corner and Cunningham was soon causing more mayhem. This time, her powerful drive was blocked by the committed United defence but the rebound fell to Kayley Lane for an assured finish.