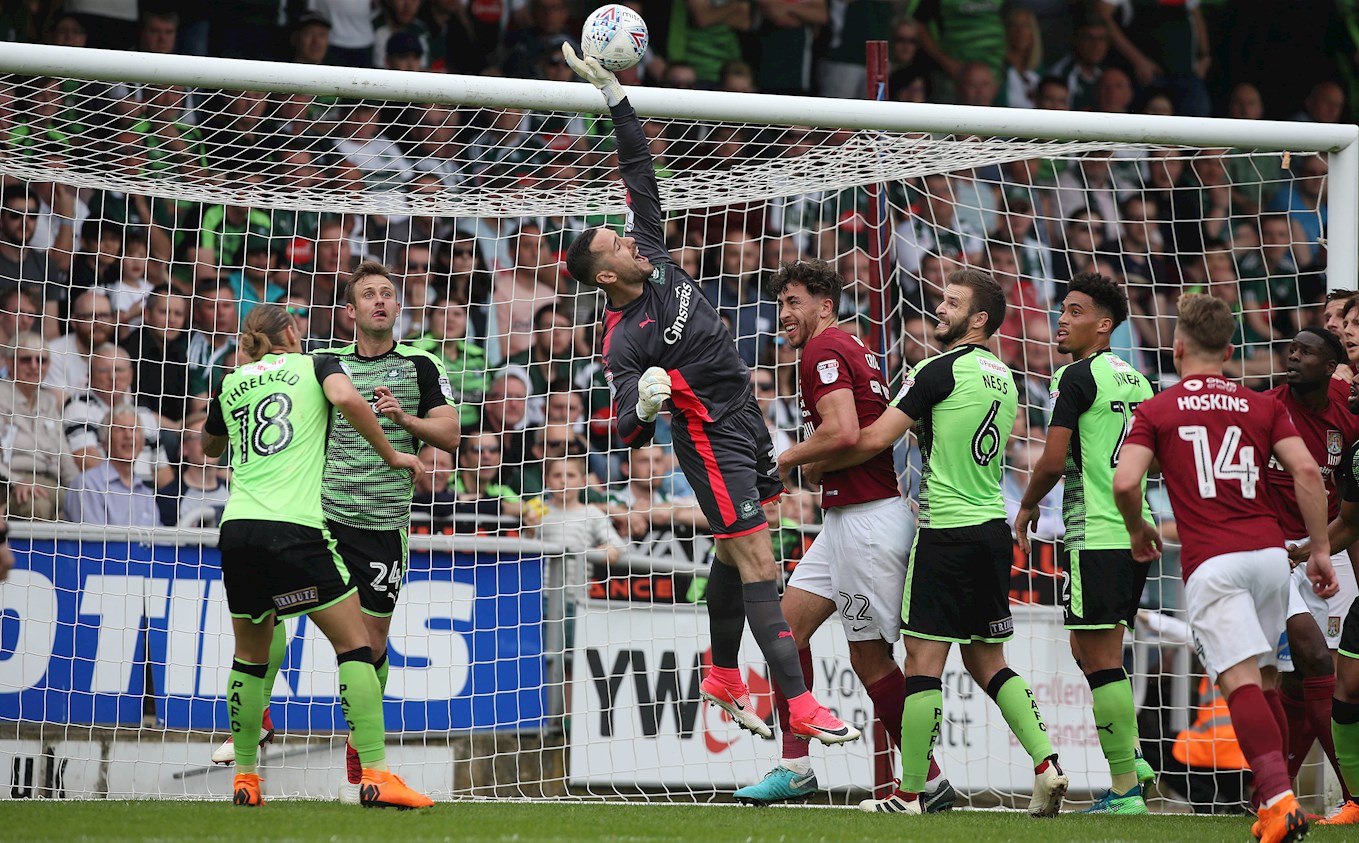 FOR fear of looking like being too route one in critiquing Argyle’s 2-0 loss at Northampton Town, today’s match report will not contain the nickname of the home side.

We will, though, give due deference to a Northampton side who, when in great peril, produced a performance full of drive and endeavour that undoubtedly merited the three points they earned.

Argyle just never got going. Perhaps they were not allowed to by Northampton, perhaps it was simply an off day. Either way, this was a tough one to take.

Northampton got the opening goal at the end of the first half. Seconds after Remi Matthews had saved well from Sam Hoskins, John-Joe O’Toole glanced in a driven, low ball. Matthews played excellently in the game, but was beaten for a second time when Sonny Bradley unluckily diverted home a right-wing cross.

Derek Adams handed a debut to Paul Paton for the injured Moses Makasi, changing Argyle’s triumvirate in midfield, while Remi Matthews returned from a two-game absence to replace Kyle Letheren in the Argyle goal. Antoni Sarcevic, who had missed nearly two months of action, was back on the bench.

This was a game that both sides were eager to win, for different reasons. Northampton were staring at a bleak situation at the bottom of the table that made it a possibility that they would need to win all three remaining fixtures to stay up. Argyle meanwhile, were looking at this as a chance to get points on the board to hoist them back into the play-off positions in Sky Bet League One.

Sporting the worst home record in the division, Northampton were keen not to show it, and set about starting the game by far the better of the two sides. Time and again loose balls were picked up by the home side first, and when Argyle did wrestle possession back, they were far too inclined to return it, all too charitably, to their hosts.

Almost exactly on the midway point of the first half Ruben Lameiras went on a long run, and kept the ball despite niggly attention. His team-mates continued to keep it, playing the ball out to Graham Carey. The Irishman beat a player and thrashed a low cross into the middle, which was deflected behind for a corner.

That may sound a needlessly wordy description to the build-up for a corner that ultimately led to nothing, but its significance was that it was Argyle’s first real piece of penetrating attacking of the game, and it seemed to spark a bit more life into them in Northampton’s half.

For all of the their early dominance, Northampton had not contrived a chance of any significance. It was Argyle, then, who gifted the home side their best chance to that point. Gary Sawyer’s pass sideways to Sonny Bradley was overstruck, and allowed Sam Hoskins to dart in behind the Argyle backline. With only Matthews to beat, Hoskins drove straight into Remi’s chest.

From the corner, Matthews had to swift of foot to jump backward and push the ball away, and Argyle had to deal with the ball in their area again before breaking swiftly. Lameiras found Grant’s angled run, and although the latter’s shot was saved, it marked Argyle’s first real effort on goal.

At the other end, though, Argyle were about to run out of lives.

Good feet from Matt Crooks saw him wriggle enough space to fire in a low cross, which Hoskins glanced goalwards. Matthews made an excellent stop to deny him, but the ball fell to Daniel Powell, who fired a ball back into the danger zone that O’Toole simply diverted goalwards.

Northampton led, uncontested, at the break, but one felt that Argyle’s best chance in the game rested on two assumptions. One was that the Pilgrims could not be that below par again in the second half, and Northampton surely could not sustain the same, blistering pace.

Just 27 seconds in the second half, Lameiras jinked to the bye-line and saw his low cross pushed away for a corner. Inside half a minute Argyle looked more threatening than in their entire first 45.

Northampton answered quickly, with Grimes shooting wide with Matthews scrambling, but this already felt like a more competitive Argyle response.

Seven minutes to the second period, Paton succumbed to an injury picked up from a clattering Grimes tackle, for which the former Exeter man was booked, and on came Sarcevic, to a huge ovation from the Green Army.

Hoskins’ pace continued to make him a danger, and when his low centre of gravity got him away from Bradley, Matthews saved terrifically well with his feet once again.

Argyle came back, winning a right-wing corner that they played short and got Lameiras into a good position, but Town broke away, with Hoskins again drawing the fire, and squaring to Crooks. The former Accrington and Rangers man looked odds-on to score, but Matthews was having a stormer, and saved from point-blank range yet again.

Northampton seemingly could not beat him for a second time, but they contrived to get the ball home another way. Grimes played a ball wide to Powell, who fired a cross low into the area. Bradley had to react to the powerful centre, and ended up slicing past Matthews and giving Northampton the cushion they craved.

Argyle looked crushed. Matthews had to be strong to push away Powell’s low drive when O’Toole put him away, then Hoskins headed not far wide from the corner.

Of all people, it was Oscar Threlkeld, picking on a loose ball when Northampton failed to clear a high Sawyer cross, who came close to getting Argyle back into the game, firing a left-footed shot on target at the near post, but seeing it kicked around by Richard O’Donnell.

Lameiras then fired one from range, which O’Donnell caught, with quarter of an hour remaining.

Carey instigated a couple of attacks that forced corners, but no final touch was forthcoming. Meanwhile, Powell had another chance to put the game to bed, but Sawyer did superbly to cover.

Alex Fletcher for Grant was Argyle’s last twist, and from a superb Threlkeld delivery in injury time, he had a moment, but a shot was blocked, then O’Donnell followed up with an even better save from Sarcevic.

This was an inopportune time for Argyle to slip up, but bearing in mind games yet to play, and Scunthorpe still to play, this play-off push is still in Argyle’s hands.

To Rochdale – where we have had momentous days before...