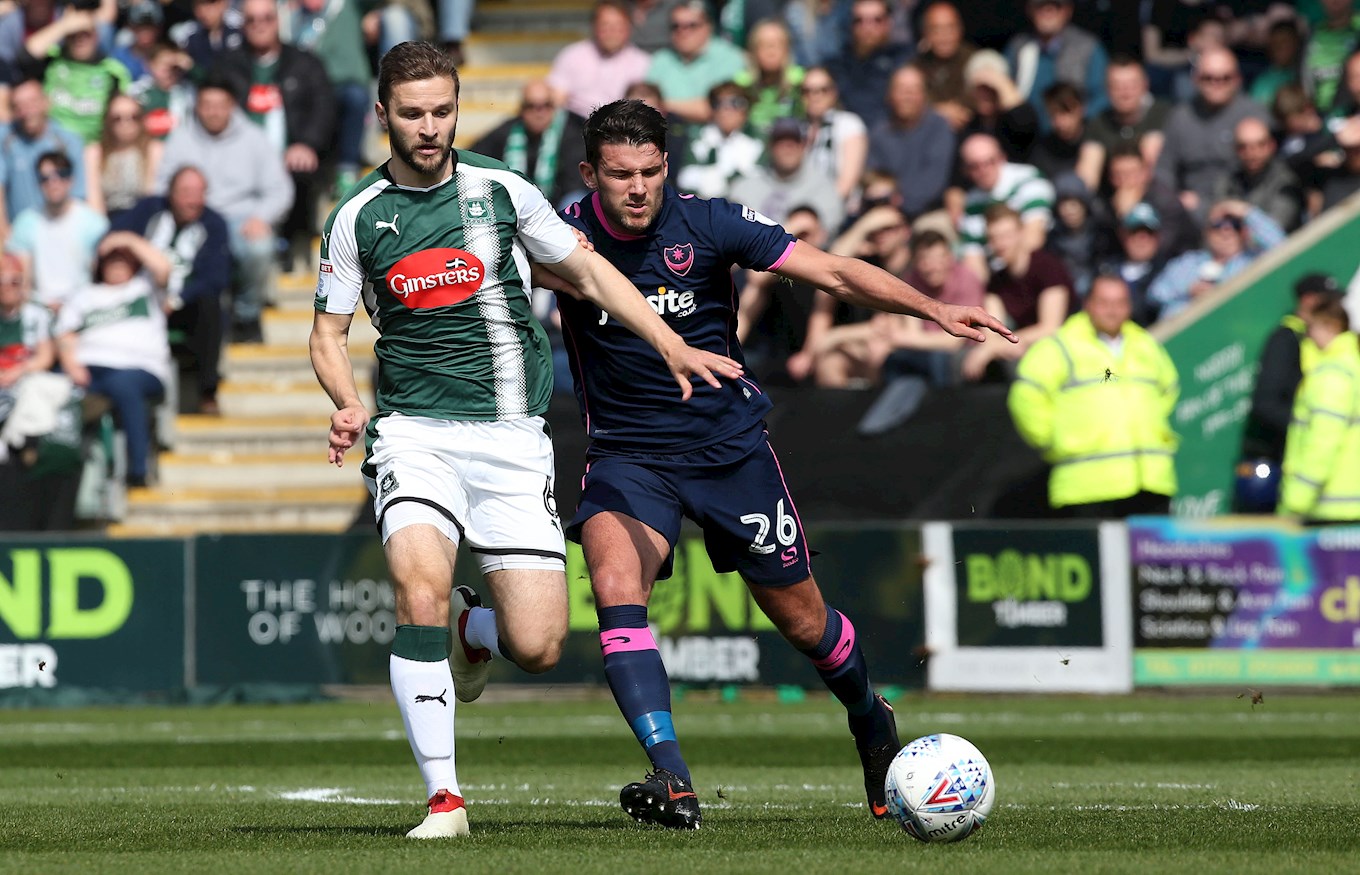 Match report for Plymouth Argyle vs Portsmouth on 14 Apr 18

PORTSMOUTH became only the second team in the last 13 league games at Home Park to leave anything other than well beaten as the navy rivals played out an enthralling goal-less draw.

In a game which ebbed and flowed but never reached the heights of some memorable previous contests, the Pilgrims had their moments but no-one got as close to scoring as Jamal Lowe, when saw his shot expertly cleared off the line in the dying moments by Zak Vyner.

Argyle went into the game without former Portsmouth forward Ryan Taylor, injured during training in the build-up to this 103rd Dockyard Derby.

With Simon Church also injured and Nathan Blissett helping Macclesfield back into the EFL, Taylor's place went to Joel Grant, a more than able deputy, who started a game for the first time in four months.

The Jamaican international had big boots to fill. One man does not make a team, of course, but, as the Pilgrim match-day programme had pointed out, Argyle have been a hugely different prospect with Taylor this season, than without him.

In the 19 Sky Bet League One matches which the No.19 missed because of injury, the Pilgrims won four and lost 10, averaging 0.3 of a point per game; with him, they have played 20, won 14 and lost two, averaging 2.3 points per game - a difference of two points per game.

Portsmouth also showed one injury-necessitated change as they sought to extend their unbeaten run to six matches, with holding midfielder Anton Walkes replaced by Stuart O'Keefe.

With the sun out, a full-house and the Devonport end in full throat, it was impossible not to cast your mind back nearly two years, to a balmy evening and one of the many epic Home Park tussles between the two sides. A giant We Are Argyle flag and Derek Adams emerging for the game, not from the tunnel but in front of the home end added to the sense of drama unfolding at the Theatre of Greens.

Just as the two upwardly mobile clubs have matched each other, virtually step for step, over the last three seasons, so the opening stages of the game proved to be a suffocatingly close affair, with neither side getting within threatening range of the other’s penalty area.

It took Argyle 20 minutes to truly open up the Portsmouth defence, when Ruben Lameiras’s pulled-back cross from the bye-line bisected Grant and Moses Makasi. Portsmouth’s opening incursion was created by Brett Pitman’s Crossfield pass that allowed Lowe to let off a shot that Letheren saved easily.

Minutes later, the same Portsmouth pair combined, with Lowe’s low ball into the area picking out Pitman, whose clever run just gave him the drop on the Argyle defence. The Devonport’s fears turned quickly to relieved laughter as the Portsmouth captain scuffed his shot.

The two chances were at the beginning of a little period of Pompey possession but Argyle dug in and, as they have done so often this season, gradually wrested back a measure of control.

Indeed, Portsmouth showed signs of creaking as Argyle got their quick pass-and-move game going, never more so than just before half-time, when Lameiras turned Jack Whatmough sharply in the area and went to ground as the tackle arrived. Seen them given.

The second half began with traded half-chances. Lowe drove into the side-netting; Carey’s impudent first-time chip with the outside of his boot sailed over the crossbar.

Grant then brought Oscar Threlkeld galloping into play for a dangerous cross that Portsmouth were happy to see the back of before as weeping move from one side of the pitch ended with Carey cutting inside and again shooting over.

Home Park was buzzing expectantly as the Pilgrims kept their foot on the gas, and Carey nearly gave the Green Army what they craved when he cut in off the right flank and pumped in a shot that was on target but was pouched by goalkeeper Luke McGee.

Portsmouth were obliged to send on Connor Ronan to deal with the dominance that Makasi, David Fox and Jamie Ness were exerting on the midfield. Further upfield, Carey twice had the Pompey back line treading water as he sprang, first, Lameiras, then Grant.

The visitors proved game opponents, though, and, with Argyle losing momentum because of injury to Threlkeld, forced a corner from which Kal Naismith’s header was gathered off the head of Lowe by Letheren.

As the game entered do-or-die territory, Portsmouth found a second wind, with Argyle possibly missing Taylor’s hold-up play more than at another time in the game, and Pitman hooked a half-chance over the crossbar.

With two minutes to go, Argyle gave Alex Fletcher the opportunity to become a hero but that mantle was immediately assumed by Vyner, who hooked Lowe’s dribbling shot off the goal-line.

Portsmouth had the bit between their teeth and a dangerous Naismith cross into the box found Threlkeld's head, which sent the ball rattling against the crossbar.

In the end, the point was enough to gain on losing play-off rivals Peterborough and Charlton, and keep pace with Rotherham. Only Scunthorpe, who beat Charlton, moved ahead of them, on goal difference.