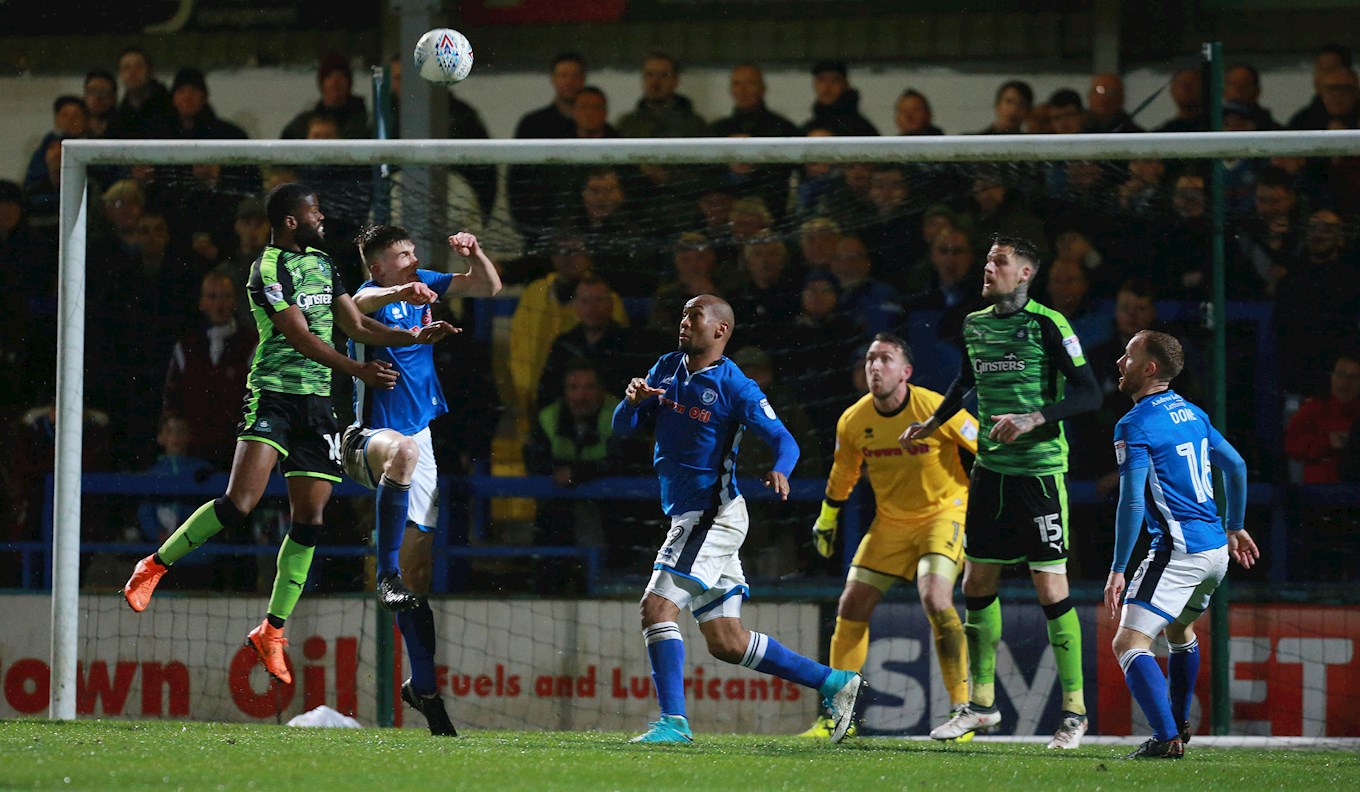 Match report for Rochdale vs Plymouth Argyle on 24 Apr 18

ARGYLE edged a point closer to the play-offs with a much-improved display from Saturday’s 2-0 defeat at Rochdale’s similarly relegation-threatened rivals Northampton Town.

After dominating the first half at the Crown Oil Arena, they eventually took the lead through Joel Grant early in a much more even second period, but held their advantage for only two minutes before conceding to Ryan Delaney at a set-piece.

The result leaves them one place outside the play-off places, two points and one position behind Scunthorpe United, who they play next Tuesday at Glanford Park, and three behind Charlton Athletic, with a game in hand but inferior goal-difference.

Argyle had showed one change to their starting line-up from the one that had begun at Sixfields.

Paul Paton, whose first start as a Pilgrim had ended in agony after a collision with Matt Grimes, was in no fit state to resumeand his place went to Antoni Sarcevic, back off the injury roundabout after a groin operation.

Manager Derek Adams had talked about being down to the bare bones, personnel-wise, after the Sixfields reversal, and the inclusion as substitute of development squad midfielder Dan Rooney – Louis’s younger brother – provided illustration.

Rochdale, whose survival bid was not helped by the late equaliser that they conceded to Bradford City in a 1-1 draw at Spotland three days earlier, made three changes, promoting Stephen Humphrysand Scott Wiseman from the bench and bringing in Mark Kitching in place of Joe Thompson, Jimmy McNulty and Joseph Rafferty.

Argyle’s personnel might have showed only one change but there had been a significant tweak to their system: in the continued absence of Ryan Taylor, Ruben Lameiras began as the most central of a forward line also comprising Graham Carey and Grant, with Sarcevic in close attendance.

The False 9 system worked superbly, and Argyle spent more time in their opponents’ defensive third in the opening ten minutes of the game than they had in the entire 90 at Northampton, as their slick pass and move game clicked quickly into gear.

With Jamie Ness and David Fox getting to grips in the midfield, Carey had a shot deflected before obliging goalkeeper Josh Lillis to scramble across his goal to keep out a dipping free-kick.

More alert minds and fast feet paved the way for Gary Sawyer to make ground down the left and find so much space that he was caught in two minds between a cross and a shot and ended up producing neither.

The home side desperately needed a spark to prevent their supporters’ frustrations from mutating into something more negative and nearly found it when Bradden Inman served up a cross to the far post that Argyle were grateful to clear.

Inman drove a shot high over the crossbar before Argyle fashioned an opening from their rotating front four that looked like breaking the deadlock. Grant moved into the centre and pulled the defence away, allowing Lameiras to feed Sarcevic, whose attempt to curl the ball around the onrushing Lillis was just foiled by the goalkeeper.

Carey popped up on the left side to leave two defenders in his wake before curling in a shot that was quintessentially Carey and failed to join his catalogue of special goals only because of the intervention of a post.

Argyle were cutting open Dale almost at will and Lameiras was next to test Lillis  after Carey had skinned Delaney to find Grant at the far post for a back-heeled lay-off to his Portuguese team mate.

As the rain beat down, so Argyle showered more chances on the Dale goal: Sawyer, again, got forward for and saw a shot deflected; Sonny Bradly headed the subsequent corner over the crossbar.

Then, from nowhere, Rochdale forced a corner in first-half injury-time, and, in an almighty scramble, someone fired off a fierce shot inside the six-yard box which was foiled more by Remi Matthews’ perfect positioning than his reflexes.

An indication of Argyle’s first-half superiority came before the start of the second half, when Dale brought on two substitutes – Rafferty and Matthew Gillam – for Kitching and Humphrys.

The switch gave the home side immediate impetus and Matthews was again called into action to beat out a shot from Scott Wiseman before Wayne Andrew headed a cross tamely into his arms.

Ironically, at the point in the game when they looked most vulnerable, Argyle scored. A break down the right seemed to be petering out into nothing when Lameiras rescued the lost cause shovelled the ball towards the goal from the bye-line.

His industry appeared to catch everybody unawares, apart from Grant, whose header was not the most powerful, but did not need to be as he placed it back across a flat-footed Lillis.

Rochdale had no option but to throw caution to the wind in search of rewards that would aid their League One survival, and such an outlook quickly brought them level when Delaney headed in Inman’s corner.

Now momentum was perceptibly with the home side and they should have taken the lead soon afterwards when Wiseman found Gillam at the far post. The substitute controlled well enough but then horribly skied his shot with the goal at his mercy.

Having wrested the initiative from the Pilgrims, Dale kept comingand Matthews added to an impressive litany of saves since his return from compassionate leave when he beat away another shot from the impressive Inman.

Argyle appeared to have weathered the worst of the storm and sent on Lionel Ainsworth for Lameiras as the Pilgrims, too, realised the value of the next goal. Sarcevic followed, nothing left on the pitch, as Aaron Taylor-Sinclair joined the party.

The earlier slugfest briefly became a cagey jab-and-move affair as both sides became keen in equal measure to score and not to concede.

Argyle found something in the last ten minutes. Oscar Threlkeld, cutting in from the right, was blocked in the penalty area with Grant picking up the loose and curling a shot just wide of the post, before Ainsworth had a shot deflected just wide.

As the game entered injury-time, Argyle won a free-kick on the edge of the D, which Carey thumped over, and that was that.