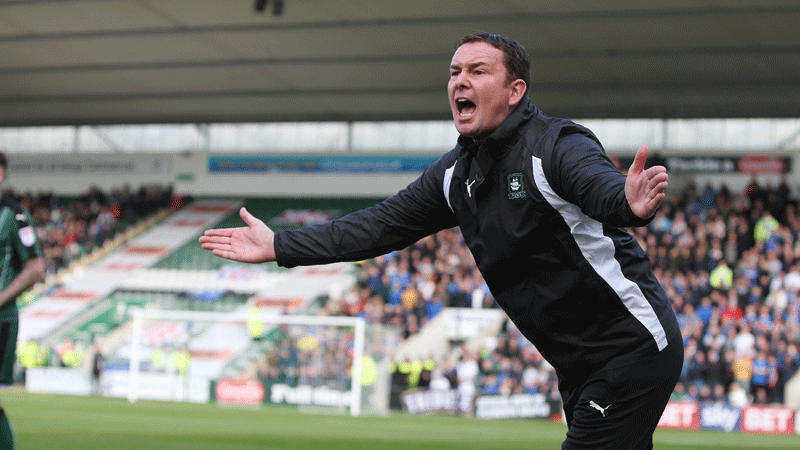 ARGYLE manager Derek Adams is looking forward to renewing rivalries as the Pilgrims take on Portsmouth at a packed Home Park on Saturday.

Since Adams became Argyle manager the rivalry between the two sides has heated up with the matches being fiercely competitive and entertaining. Adams has played Pompey seven times winning two, losing two and drawing three, which shows how competitive the sides have been in recent years.

Adams said: “They are fantastic games. I’ve been here just over two and a half years and I’ve really enjoyed the games against Portsmouth. They are terrific atmospheres, home and away, and we have had a lot of good football matches. There’s two very good teams who both finished on the same points last year and got promoted into this league and have been very competitive by pushing for a play off position.

“If you look at it in different ways: we have done really well competing with a Portsmouth team that do what they do.”

Since last season Portsmouth have had a change of manager – Kenny jacket taking over from Wigan-bound Paul Cook - which has resulted in a slightly different style of play with forward Brett Pitman being a crucial asset. Adams knows the Pilgrims have to maintain their discipline if they are to get a result.

“They are wee bit different,” said Adams. “Their full-backs don’t go as high and wide as they do under Paul Cook. One of them stays back one of them goes high up the pitch.

“They have a threat in Pitman who has done really well this season scoring goals. But, they have got a similar style of play that they have had over a number of years. He has scored a lot of goals this year. He is one that we will have to watch again this week.

“We looked at the stats after Saturdays game. We passed the ball and kept possession well; we are playing in really good areas at this moment in time. We will have to do that on Saturday against Portsmouth and take care of the threat that they are going to cause. We have to take the chances we create.”

Derek also knows how important the Home Park crowd will be on Saturday in getting behind the lads as they have done all season.

“We will have the biggest crowd of the season here on Saturday,” said Adams.“The crowd will generate the atmosphere, there is not much motivation that needs to be done. When you step over that line the supporters will be very excited and noisy so we know what it’s like on the pitch.

“I think that we look at it after the results the other night, there are six teams going for three positions. We have a game in hand in the last week of the season and we want to keep picking up points between now and then. There is going to be a lot of teams cutting each other up as everyone is playing each other in that period.”