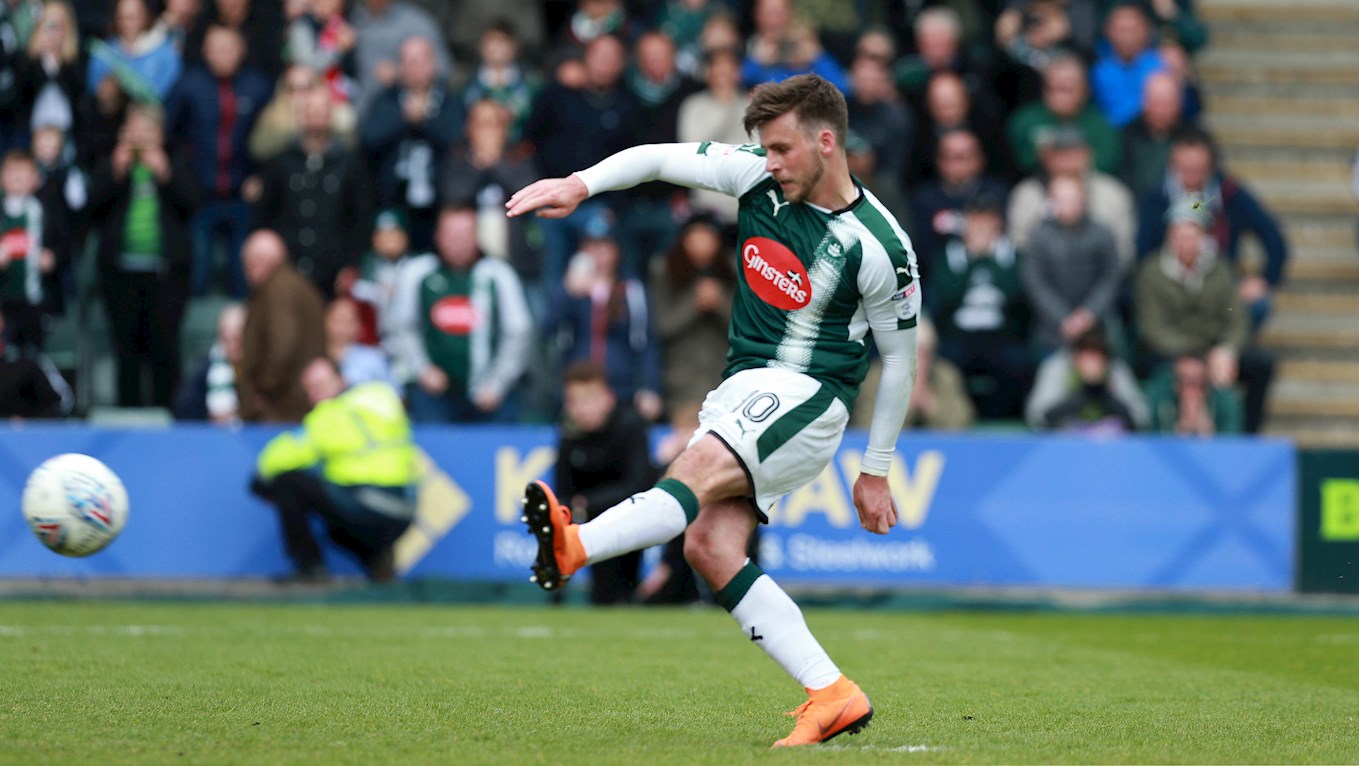 The Pen is Mighty

GRAHAM Carey was Argyle’s hero again as he scored a stoppage time penalty to give the Greens a 2-1 victory over Rotherham United on Saturday.

Argyle remained two points behind Scunthorpe who currently occupy the final play off place, with the two teams meeting on Tuesday night, in their penultimate fixture. When Argyle won the penalty late in the game, with Carey being felled by Will Vaulks, there was only one man to take it.

It was the third late penalty Carey has scored for the Pilgrims in front of the Devonport end to give Argyle a crucial three points. But the talisman, on the day he picked up the Pilgrim of the Year award for the second year out of three, admitted after the game he didn’t feel any pressure.

Carey said: “He (Vaulks) was a bit unlucky. He kind of slipped a little bit, but he did catch me then get the ball. Fair play to the ref in that situation to give a penalty. I think it was a penalty; it may have been a bit harsh on their player but at the end of the day it was a penalty.

“I Just tried to keep a clear head. Before I got the ball I knew where I was going to put it. I had a clear mind and focused on the penalty. I am getting used to taking them now, but today I didn’t feel any pressure compared to the last one, having missed the one before that.

“Today for some reason I didn’t feel any pressure and it was a good pen.You just stay focused on scoring the penalty and when it goes in then you can celebrate. So, it was just about keeping a clear head and that is what I’ve done today.

“To score a goal to win any game is brilliant. It is a feeling you will never get used to, especially with the importance of it. It was good, but today we showed a lot of character and we were good in the first half. We got punished by making one mistake and they were clinical. They are a good team and they will obviously be in play-offs, so it is up to us now.”

With the Greens trailing at half-time Carey admitted that team felt if they could score one there would only be one winner especially with the confidence the team has at the moment.

“The way we approach games is not to panic as we have enough quality in the team,” said Carey.“We have enough players with determination and great heart to get back into any game. We said at half-time if we score one, we win the game. We knew we weren’t going to concede another. Remi was top class again today with a couple of crucial saves which his has done this week. As long as we kept them out we knew we if we scored one we would score two.

“I think to be fair that (confidence) is what is getting us through games at the minute. Even with the boys that are fit we are not really 100%. But, we have come this far that with two games left we can get in the play offs. If we were 10th or 11th we probably wouldn’t be able to field a team! But, because of where we are the boys are battling hard which shows the character of the boys and their will to win. For us to go and win like today it was massive.”