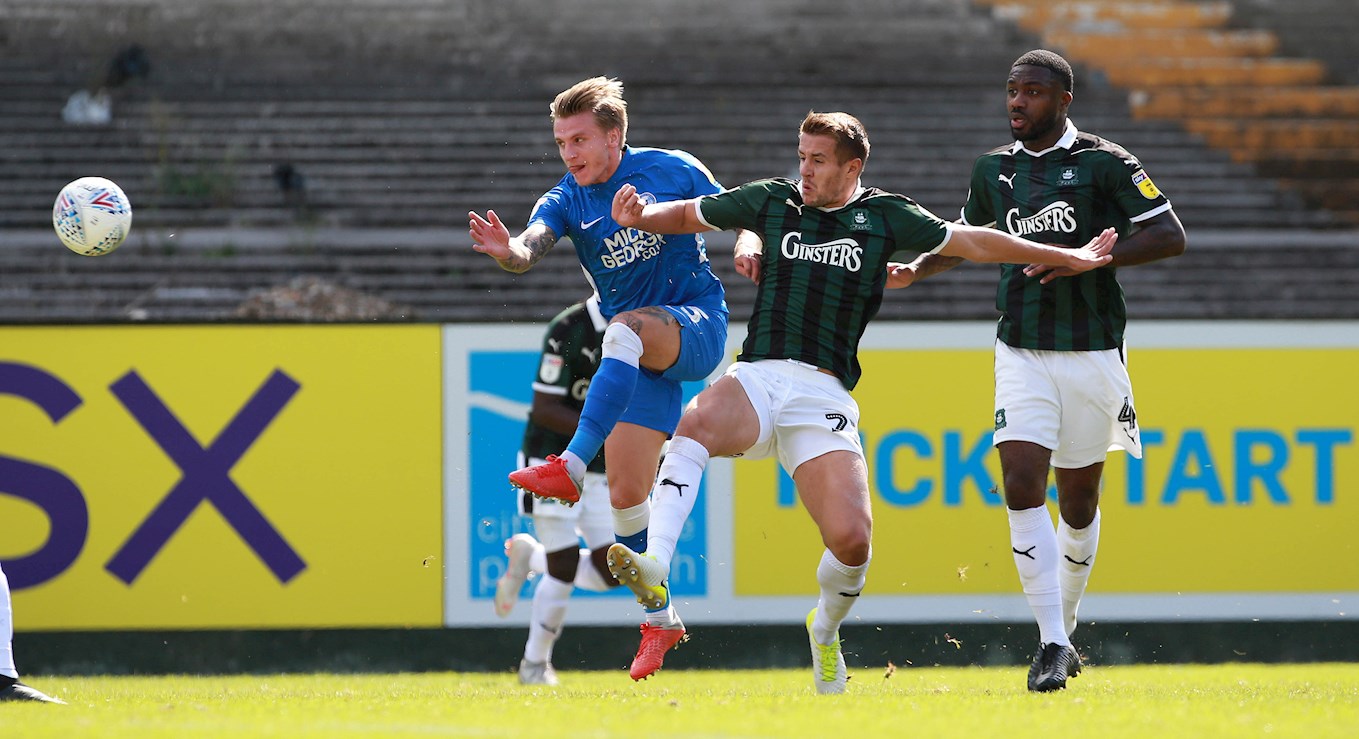 DEREK Adams had little doubt what was at the heart of Argyle’s demise in their 5-1 home defeat by unbeaten Sky Bet League One leaders Peterborough United.

I had to take off three centre-halves because that’s where the problems were coming from,” said the Argyle manager. “I can’t blame the midfield, I can’t blame the strikers, from a defensive point of view.

“I thought we had good shape; I thought we had control of the game when we had the ball; I just didn’t think [Peterborough] were going to break us open, other than when we gave the ball away.”

Matt Godden and Siriki Dembele put Peterborough 2-0 up after only 11 minutes following defensive mistakes from goalkeeper Matt Macey and centre-back Niall Canavan, who was one of five players to occupy a central defensive role inside the first hour of the game. Scott Wootton, who started in the heart of defence alongside Niall, and Yann Songo’o, who dropped back from midfield after Niall was substituted at half-time, were also substituted as Argyle finished the match with Gary Sawyer and Ryan Edwards in harness.

Derek said: “The way we defended today, I’ve had to take off three centre-halves in the game, which is unheard of, and, if I had more on the bench, it could have been different.

“It did go wrong for them. They made bad decisions, and decisions which haven’t helped us.

“The back four and the goalkeeper didn’t do us any favours. I’m maybe [unfairly including] Ash Smith-Brown there – I maybe shouldn’t – but the other ones have been a problem for us today because that’s where the goals have come from.”

Despite trailing to the league leaders’ early strikes, Argyle responded with spirit and looked more than capable of getting a toehold in the match as Peterborough ended the first half on the back foot.

Derek said: “Peterborough play very narrow in midfield and I thought we controlled the game. We played with four central midfield players and we did have a lot of the ball in midfield. [Peterborough] were never going to play through us, and they like to do that.

“We outnumbered them in the middle of the pitch and, at times, we had some good play; we got our full-backs into forward areas and it allowed us to get opportunities in the box.

However, any hopes of a second-half comeback were dashed soon after the break as Peterborough doubled their lead through two Jason Cummings goals.

That is the way it stayed until injury-time, when Edwards and Godden swapped goals to complete the scoring.

Derek said: “At 2-0 to them, if we could have got a goal before half-time, then we change the way the game is going. But we didn’t and, then, into the second half, they score two quick goals and it just going to be very difficult after that.”

Argyle’s next League One game is at naval rivals Portsmouth, who are also unbeaten. Before that, they visit Millwall in the Carabao Cup, when on-loan Cardiff City midfielder Stuart O’Keefe will be available for selection.

Derek said: “We have got to go away to a difficult game at a Championship side, and we know how good a game it is going to be, but it does give us that opportunity to play another game quite quickly.

“[Stuart is] a midfield player that gives us more energy; he gets up and down; he was at Portsmouth last year and has got good experience. At this stage of the season, we will need that.”