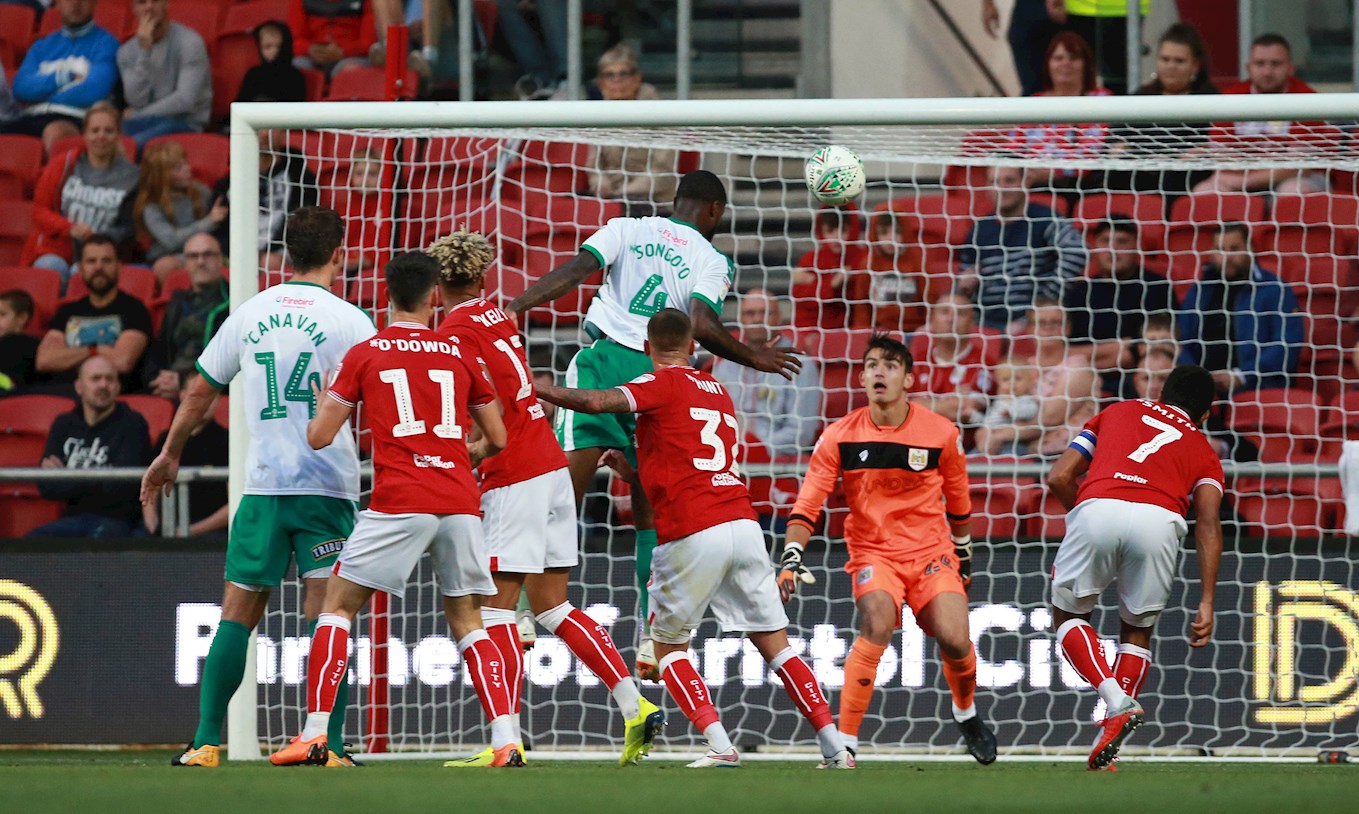 FOR the first time since 2012, Argyle progressed to the second round of the Carabao Cup, with a stunning 1-0 win at Championship side Bristol City.

Six years to the day since Argyle beat a barely-there Portsmouth 3-0 at Home Park, the Pilgrims progressed in a competition they have had hardly shared a love affair with over the years.

City, meanwhile, not only knocked Argyle out of the completion last season, but went on to lose to the mighty Manchester City in the 2017-18 semi-finals. But boy how the tables turned this time.

Yann Songo’o’s unmarked header was the nominal difference between the teams, but the bigger difference was between the Argyle side that got annihilated at Ashton Gate last year, and dug in so deep this time.

With perhaps at eye towards the previous visit to Ashton Gate, around 12 months previous, Derek Adams did just a small amount of squad tinkering.

While sometimes the coup competitions can see changes made, sometimes involving the whole team, Adams opted to rotate just four players, all with understandable reasons.

Ryan Edwards, Ryan Taylor and David Fox all had reasonable reasons for not being pushed too hard at this stage of the season, while Ruben Lameiras had been dragged twice in the opening two league games. Niall Canavan, Yann Songo’o, Joel Grant and Freddie Ladapo all stepped up, the first and last named making their first Argyle start.

At this very stage of the competitions last year, City had inflicted a 5-0 victory over a barely-there Argyle. It is not often a 5-0 scoreline flatters the team that lost.

There was a little déjà vu feeling in the opening two minutes, when City had the ball over the line following a right-wing corner, but it had taken illegal tactics to bundle the ball from Matt Macey’s grasp.

Macey was busy in the early stages, but not troubled. He gathered a few shots from range, claimed a couple of crosses, and burst from his line to clear a ball before an onrushing Matty Taylor,  but City were not as irresistible as the previous season, when they had scored three in the opening 20 minutes.

Argyle even had a chance or two of their own early on, most notably when Joel Grant cut back for Jamie Ness, captain for the night, who had his pocket pinched and he went to shoot. Seconds later, Conor Grant and Graham Carey smartly combined to get the former into the box, but his early cross caught even his team-mates unawares.

Carey showed his prowess at the other end of the park too when City swiftly broke away and Marley Watkins looked like getting clear, but Carey was the last covering Pilgrim, and stopped the attack with a perfectly timed tackle.

From a free-kick, Songo’o headed down to Ladapo, who could not quite get his shot away. Songo’o, playing very deep in the Argyle midfield, was booked for a lunge in the second minute, leaving him on rather a tight rein as a defensive player in what felt like it ought to be a rearguard performance.

It was not really in the script for Yann to pop up, unmarked, before half hour mark, and nod Argyle in front.

Argyle had a free-kick wide on the right for a handball by City captain Korey Smith. Smith felt he had been fouled by Conor Grant, and instinctively reached out and grabbed the ball. This, contrary to his belief, led to an Argyle free-kick, which Conor struck into the area. City half-cleared, but only to Joel Grant. Joel played the ball backwards to Carey, whose pinpoint first time cross found Songo’o, given the freedom of Bristol, who nodded in with embarrassing ease.

One felt there was a chance this could poke the dozing bear, to fire up the Championship side and force them into action, but if anything it was Argyle who upped their game. Prior to going ahead, Argyle were dealing well with City, but were still living off scraps and counters. After going ahead, it was the visitors who began to play the more controlling football.

Indeed, there was the chance to double the lead when Ladapo fed Joel Grant, who burst down the left hand channel, cut back onto his right foot, and curled not far over.

At the other end, City quickly carved out their best chance to that point. Callum O’Dowda jinked infield, and squared to Mo Eisa, who seemed to have most of the goal at his mercy, but managed to drive his shot straight at the well-positioned Canavan, and the chance was gone.

The second half shifted to a pattern resembling the early part of the first, with City on the front foot, attacking, but largely finding a green and white wall on the edge of the area. Shots were generally from long range and either off target or easily gathered. That said, Matt Macey did have to palm Smith’s 20-yarder over the bar.

On the hour, City took over left back Jay Dasilva, shifted Lloyd Kelly across to that position, and brought on recently-signed £4m defender Adam Webster to plug the gap. Ten minutes later, Austria international Andreas Weimann was introduced, having scored twice in his two City Championship appearances so far.

City were always a threat, but this was a classic Argyle away performance of a couple of seasons ago, blocking everything in sight, and the Pilgrims were no shrinking violets going forward, too. Ladapo in particular was causing the home side problems they probably did not anticipate.

Gregg Wylde came on for Joel Grant to give Argyle extra legs, with David Fox following for the cramp-stricken Songo’o.

Right-back Jack Hunt got on the end of a far post City cross, and his sliding connection looked perfect for Eisa to tap home, but he could not reach it. Kelly then headed wide following a short corner. They were getting closer.

And then it happened. Smith’s low drive found the bottom corner…but no – a flag, held aloft by the assistant signalling that Eisa was in an offside position that affected Macey’s line of sight.

Adams sent on Taylor for Conor Grant, giving Argyle extra presence up front, if they could find an out ball. Very occasionally they did, but typically this was a backs-to-the-wall, dig-in-for-your-life job.

And goodness me, didn’t they just? Fox, Wootton and Moore all made important interventions, while Ness made maybe half a dozen. City kept throwing balls into the mixer, but Argyle always did enough.

With one minute left of the five added on, Wylde surged away down the left, and played the game out in the corner, in front of a gleeful Green Army.

We’ve been doing our research – turns out there is a Round TWO of this competition. Who knew? The draw is on Thursday night at 7pm. How very exciting.