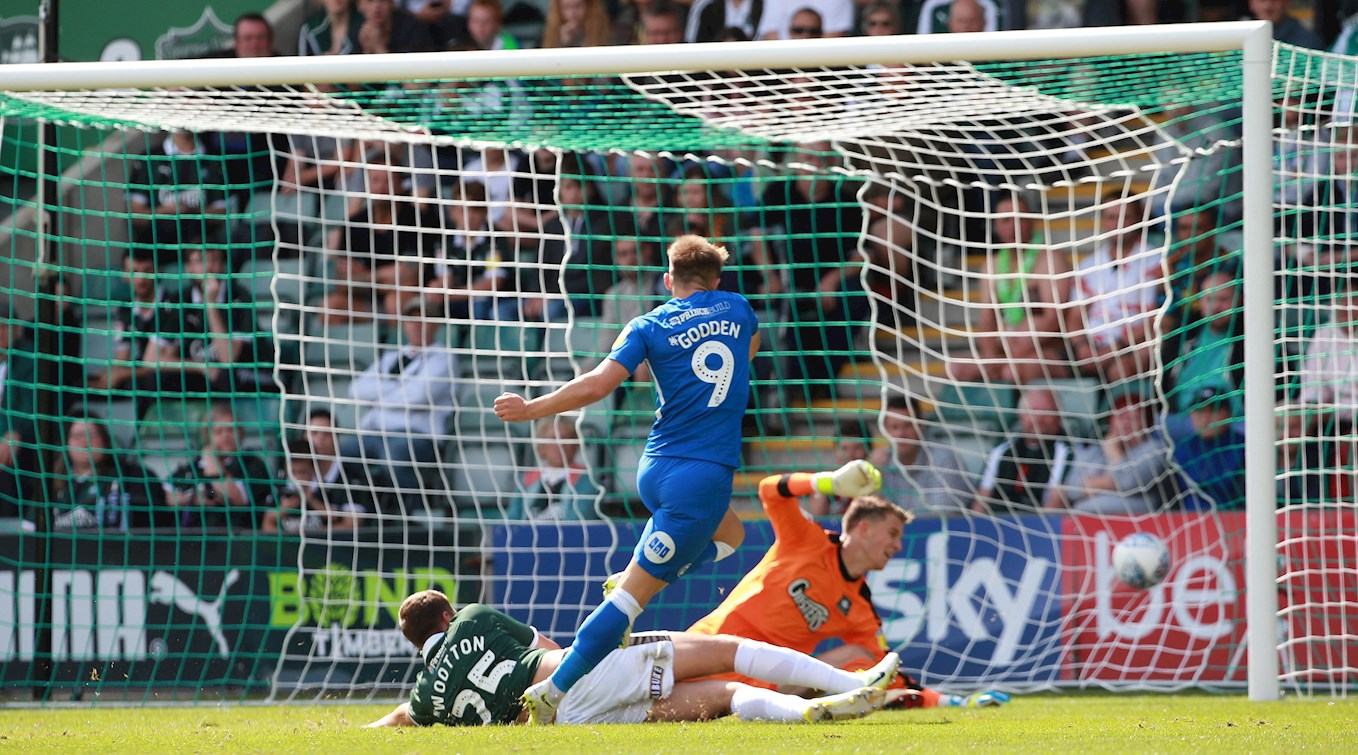 THE Sky Bet League One table-toppers left Home Park with their lead extended by a scoreline that was arguably more emphatic than their display.

Certainly, Argyle contributed to their own downfall, gifting Peterborough two chances to score before they had an attack of their own, which Posh duly took through Matt Godden and Siriki Demeble.

The Pilgrims responded well to the early setback and gave their visitors plenty to cope with for most of the remainder of the first half before a similar rocky start to the second period allowed Peterborough to double their lead: Jason Cummings first finishing off a breakaway and then profiting from some more self-inflicted damage when he converted a penalty given away by Graham Carey.

Substitute Ryan Edwards gave Argyle’s fans a modicum of reward for sticking with them until the bitter end when he headed home Conor Grant’s injury-time free-kick to become the Pilgrims’ leading scorer this season.

Even then, they were not allowed the last word, with Godden subsequently adding a fifth to Peterborough’s impressive scoreline.

Argyle manager Derek Adams had recalled Jamie Ness, after his one-match suspension, and Yann Songo’o to bolster the Pilgrims midfield, with Carey coming back into the centre and playing off in-form forward Freddie Ladapo.

Ness re-took the captain’s armband from David Fox, who started on a substitutes’ bench that also contained Joel Grant but – and here is a measure of the Pilgrims’ strength in depth this season – had no berth for Ruben Lameiras.

For their part, Peterborough manager Steve Evans unsurprisingly stayed faithful to the same 11 players that had started all four of Posh’s previous League One matches. Strength in blue, too, with Marcus Maddison, George Cooper and Ivan Toney among those among the Boro replacements.

If the Argyle pre-game strategy involved thoughts of containment, then the blueprints were in shreds by the 11th minute, largely because of individual errors of which no amount of planning can, or, indeed, should, take account.

Peterborough were handed the opportunity for their opener after eight minutes when goalkeeper Matt Macey miskicked his clearance of Scott Wootton’s routine pass back. With the Pilgrims’ defence on the front foot, Cummings had plenty of time to make ground and cross for Godden to volley home.

Cummings, on loan at Boro from Nottingham Forest, then profited from another misplaced pass, this time by Niall Canavan. Cummings teased in Dembele, whose shot across Macey from the left-hand side was nudged in by the goalpost.

From not conceding a goal in open play in the first seven hours and 15 minutes of this season, the Pilgrims’ defence had shipped three in the subsequent 16 minutes.

Argyle needed a response and they nearly found it from Carey, whose downward header from Ashley Smith-Brown’s cross was powerful and well directed, to the foot of the post, where United goalkeeper Aaron Chapman scrambled clear.

Carey then went solo, driving into Peterborough penalty area before unleashing a strong left-foot shot that was kept out by a combination of Chapman and the post, before the Pilgrims survived a shout for what would have been the fourth penalty awarded against them this season when Smith-Brown tussled with Joe Ward.

Another unforced defensive error handed Cummings a chance to add a goal to his two assists, with Canavan miscontrolling. The slip allowed United’s Scottish international to bear down on Macey unfettered, but his shot across the goal drifted just wide.

However, Canavan’s slip came in the middle of period of play in which Argyle played the sort of flowing, confident football which would not have been out of place had they been 2-0 up, and not 2-0 down.

Some good attacking play put the United defenders and goal under sustained pressure. Ladapo headed Grant’s precise delivery goalwards but only into Chapman’s arms, before Carey tricked his way to the right-hand bye-line and hung up a cross which met Canavan’s head before being blocked on the way to goal – from the loose, Smith-Brown fed Ladapo, whose rising shot on the turn only just cleared the cross bar.

Such was the onslaught that Peterborough were reduced to engage in time-consuming tactics before the half was over, referee Chris Sarginson reminding their captain Alex Woodyard of their obligations.

Argyle emerged for the second half without Canavan and with Ryan Taylor and immediately went back on the attack.

They were denied plausible claims for a penalty when Taylor’s shot struck a raised Peterborough arm, and the Pilgrims’ sense of injustice was heightened when, from the breakdown, the opposition launched their first attack in some while and promptly scored when Cummings converted Godden’s spot-on pass.

Cummings celebrated childishly, thumb to nose and wiggling his fingers to the Lyndhurst Road stand. However, Sarginson, who famously did not see an assault on a ballboy on a previous visit to Home Park, presumably did not see the ill-considered gesture. He certainly saw no reason for a yellow card.

Scott Wootton and Songo’o were still in the getting-to-know-you stage of their new centre-back partnership when Godden broke against them, but he shot wastefully wide.

The fourth goal was not long in coming, though. A fourth penalty conceded this season and the second given away by Carey, for a foul on Ward, was despatched by Cummings, who this time, celebrated properly in front of his own rightfully delirious supporters.

Adams’ response was to immediately replace Songo’o and Wootton with Sawyer and Edwards, to form a third different centre-back pairing in less than an hour, indication, surely, of where he felt the core of the Pilgrims’ problems lay.

Inevitably, the result now a foregone conclusion, the game meandered to its somewhat dramatic end, with both sides having at least one eye on future engagements.

For Argyle, after a midweek Carabao Cup tie at Millwall, that is a Dockyard Derby away to Portsmouth.