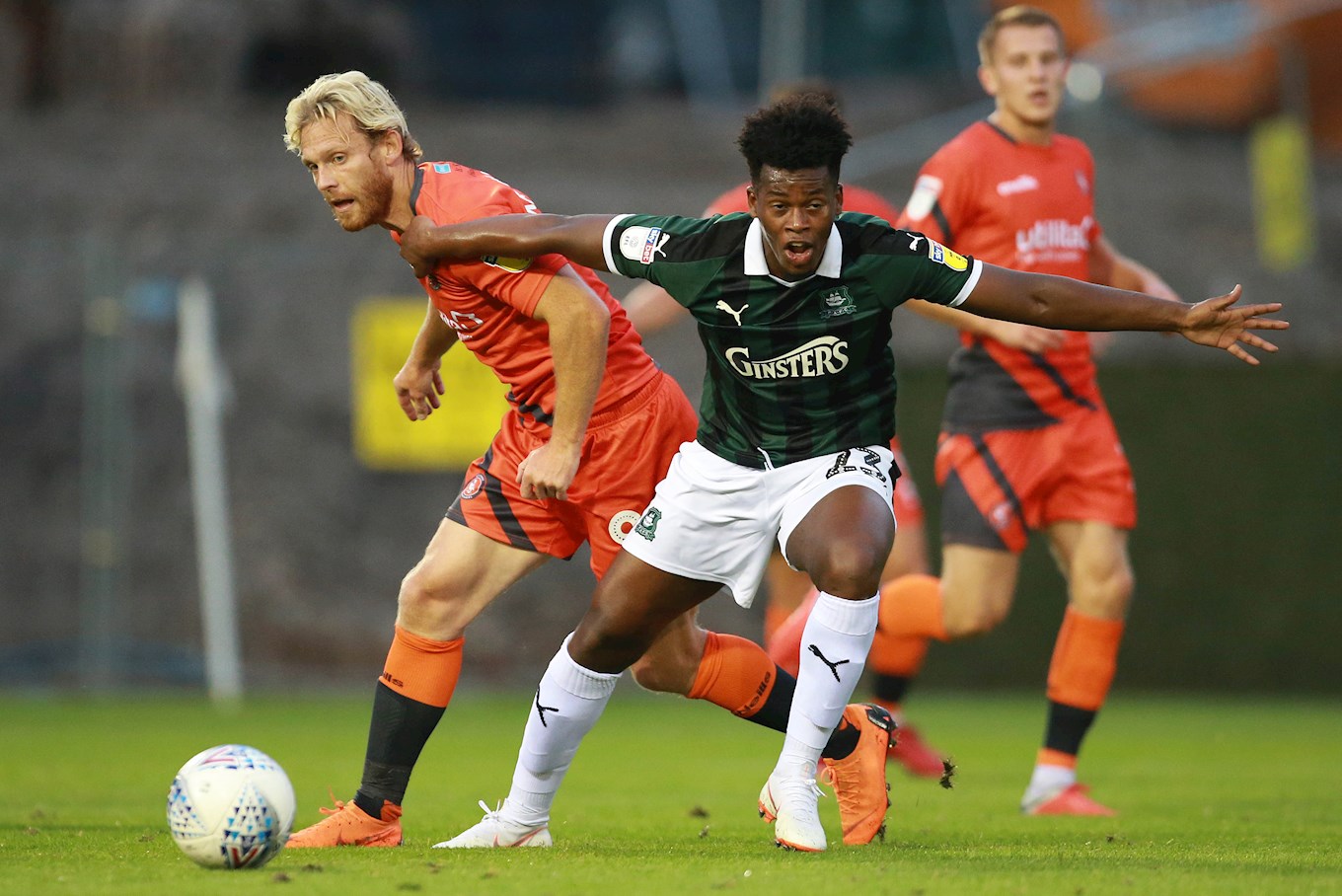 ARGYLE are still to claim their first win of the 2018-19 Sky Bet League One season, although they came their closest yet with a second consecutive 1-1 draw at Home Park.

Freddie Ladapo gave Argyle a very early lead in a first half the Pilgrims dominated. However, Wycombe turned the tables after the break, and by the time they equalised, the goal had been coming.

The last time Argyle beat Wycombe in league action was on April 10, 2004. That day, Bloomfield made his 10th appearance for Wycombe. This game marked his 482nd, and he marked it with a crucial equaliser for his side.

With the knowledge that midfielder Jamie Ness would miss the game because of a suspension incurred by a red card received in the 1-0 defeat at Coventry, Argyle received a huge boost in the form of Antoni Sarcevic, who missed all of pre-season through injury. He came in for Ness, while Derek Adams opted to replace the destructive force of Yann Songo'o with the more constructive David Fox.

Inside the first minute Sarcevic went to ground to try to win a tackle it did not look like he could make. He won the ball, and got kicked in the face for his troubles. Welcome back, Sarce. (He was fine, by the way)

Argyle were better than fine. A smooth break down the left saw Ashley Smith-Brown glide onto a throughpass, with Wycombe's Michael Harriman steadfastly refusing to track and, well, harry his man. Smith-Brown's cross found Ladapo, who should have done better than head over from six yards.

He soon got it right. Graham Carey's deft chip over the defence was in the hinterland that goalkeepers detest. Ryan Allsop realised too late that he had made the wrong initial decision to approach the ball, and by the time he had begun to rectify the state of affairs, Ladapo had reached the ball and lobbed the stranded goalie.

Wycombe immediately tried to beat Argyle at their own game, clipping a ball over the top, but Matt Macey did not fall foul to the same indecision as his opposite number, getting out of his box early and heading away.

At times, it was appropriate that Wycombe's deepest midfielder was named Dominic Gape, because the hole appearing between defence and midfield for the visitors resemble such a desciption. Joel Grant and Carey revelled in it, with Wanderers more than once having to make telling edge-of-the-box blocks to stop either a shot or a throughball to Ladapo.

Macey was not redundant, though, as evergreen ever-blue Matt Bloomfield struck from long-range, and the Argyle keeper made a flying stop. A threatening break from an Argyle attack ended with Jason McCarthy's much tamer being easily pouched by Macey, as Wycombe began to remind us of their presence.

Argyle were still on top, and created a pair of efforts as Joel Grant's dangerous low cross was cleared well by Anthony Stewart, before Tafari Moore's clipped cross was only just beyond the advancing Sarcevic.

The half ended on an unneccesarily sour note, created by a strange piece of refereeing from Ollie Yates. Adam El-Abd, Wycombe's captain, cleared the ball from his own box, and it was immediately apparent that he had hurt himself in the process.

Wycombe had the ball, and did not put it out, but one felt the officials should have between them spotted the stricken player and stopped play. The Laws of the Game allow for referees to stop play for what they consider to be serious injuries, not just blows to the head. That he let play go on is one thing, but the fact that when Argyle stopped Wycombe's attack and looked to start a break of their own, that is when he stopped the game, was not something Adams or the Green Army took kindly to.

Unfortunately, previous niggle between the two sides, stretching back years, over previous acts of gamesmanship by Wycombe, led to Argyle fans jeering El-Abd and Wycombe. In this instance, such catcalls seemed misplaced, as El-Abd was obviously hurt and was substituted. His refusal to mount a stretcher brought out for him can probably be attributed to pride rather than a previous bout of exaggeration. We wish him all the best.

Bloomfield, who made his debut for Wycombe nearly 15 years ago, racking up over 400 league appearances, led Wanderers out for the second half, with Sido Jombati having replaced El-Abd.

Bryn Morris fired not far wide for the visitors, while Carey shot straight at Allsop, with Ladapo looking like the better option. Both sides were on the offence where they could, looking for the game's crucial second goal.

Wycombe were looking the likelier. Craig Mackail-Smith's retrieval of a lost cause saw him hook a ball against the post, although that sounds more dramatic than it sounds, as his shooting angle was practicall impossible. What also seemed barely possible is that no-one got a touch on Morris's tremendous inswinging cross that just missed the far post.

Randell Williams showed great persistance in getting to the bye-line and cutting back to Morris, whose well-ht shot was really travelling, but was blocked by a wonderful intervention by Fox.

Wycombe brought on Scott Kashket, a scorer the last time he visited Home Park, for the ineffective Harriman, and continued to press. Niall Canavan was next to make a fantastic block as a gorgeous Wycombe passing move carved Argyle open.

Macey made a wonderful save to his left to deny the persistant Morris, teed up by another recent, familiar substitute, Adebayo Akinfenwa.

Adams was prompted into a double sub of his own, replacing Joel Grant and Fox with Ryan Taylor and Yann Songo'o, and reverting to a midfield diamond. Whether by accident or design, this led to a sudden Argyle attacking flurry, with Sarcevic first hitting a powerful shot, deflected wide, then winning the ball for Taylor, whose shot was charged down.

In the end, Wycombe's persistance paid, as offensive lineman Akinfenwa held off a challenge and played Bloomfield in, and the experienced midfielder slid home from a tight angle.

Wycombe, with their tails up, nearly won it, with Kashket nearly cashing in on some splendid build-up play by McCarthy, spinning and hitting the inside of the post, only to see the ball fall for the grateful Macey.