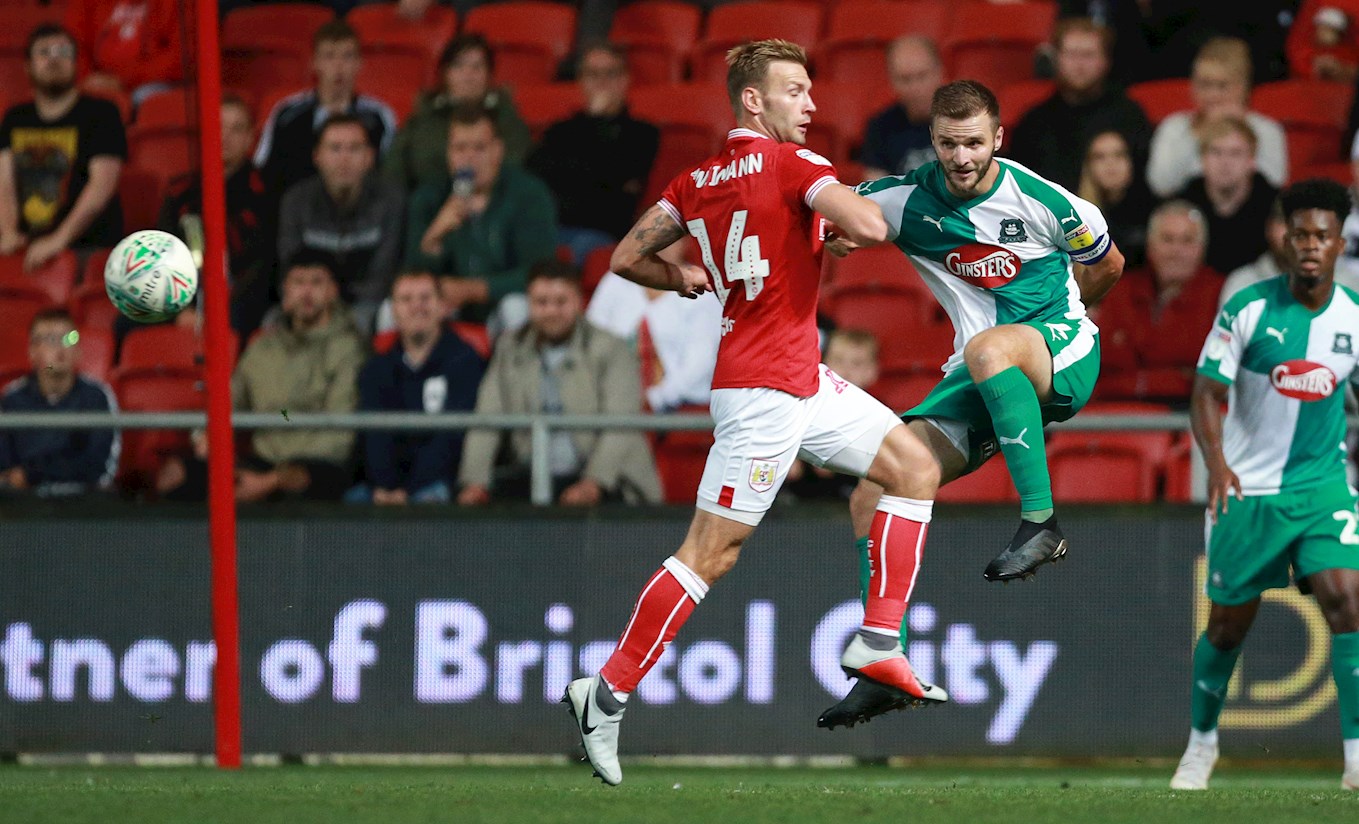 JAMIE Ness has expressed his pride at being handed the captain’s armband for the Carabao Cup clash at Bristol City on Tuesday night.

With Gary Sawyer and David Fox omitted from the starting 11 at Ashton Gate, Ness was made captain for the night, for the first time in his professional career.

“Tuesday night was the first competitive game that I have been captain,” said Jamie. “It’s a really proud moment for me, being able to lead out a team like Argyle. In the future it’s something I’ll look back on with pride. It’s a big honour really.

“I found out I’d be captain when we got to the ground; there wasn’t too much ceremony made about it but it was just one of those things where Gaz and Foxy weren’t playing, Ryan Edwards has been captain in pre-season so I had an inkling it might have been me.

“[Being captain] there is that little bit extra responsibility where you feel like people maybe look to you a bit more but I like thriving under pressure. I didn’t really think about it too much on Tuesday night, I was too busy concentrating, it was one of those games where you needed to but it was an enjoyable experience.”

There is plenty to be proud of after an impressive display in Bristol, as Yann Songo’o’s goal gave Argyle a 1-0 win to put them through to the next round. A year previously, City had beaten the Pilgrims 5-0 at the same venue.

Jamie said: “It was important that it wasn’t a result like last time. We knew it would be difficult after going there last year but I feel like that was a really good performance from us.

“We know that they are a team capable of doing that to most League One teams, it was an off night last year but I think we rectified that a little bit. We knew that if we played well we would have a chance of getting through and that’s what we did.

“We wanted to get through into the next round, obviously the club hasn’t done it in a long time so, there’s a bit of excitement now to be in the hat for the draw We all stuck to our jobs, we knew it was going to be a tough test we all worked hard and kept our organisation and it was a really good result in the end.”

To provide some context to partner a fantastic performance we have only progressed past the first round of the League cup five times since 1992. And the stand-in skipper praised the attitude of the match-winner, Yann Songo’o.

Ness said: “Yann was great, he has had to bide his time a little bit not being in the team at the end of last season and the start of this season but he’s trained really well, he’s come back and he’s not let his head go down at not being in the team and it showed on Tuesday night when he came in he was ready and put in a really good performance.”

Jamie hopes that, that performance can build momentum going into Saturday’s game against Coventry.

Ness has fond memories of the Ricoh Arena having been involved a winning Scunthorpe side. The midfielder completed the full 90 minutes while his now teammate, Ruben Lameiras, was an unused substitute for the hosts in January 2016.