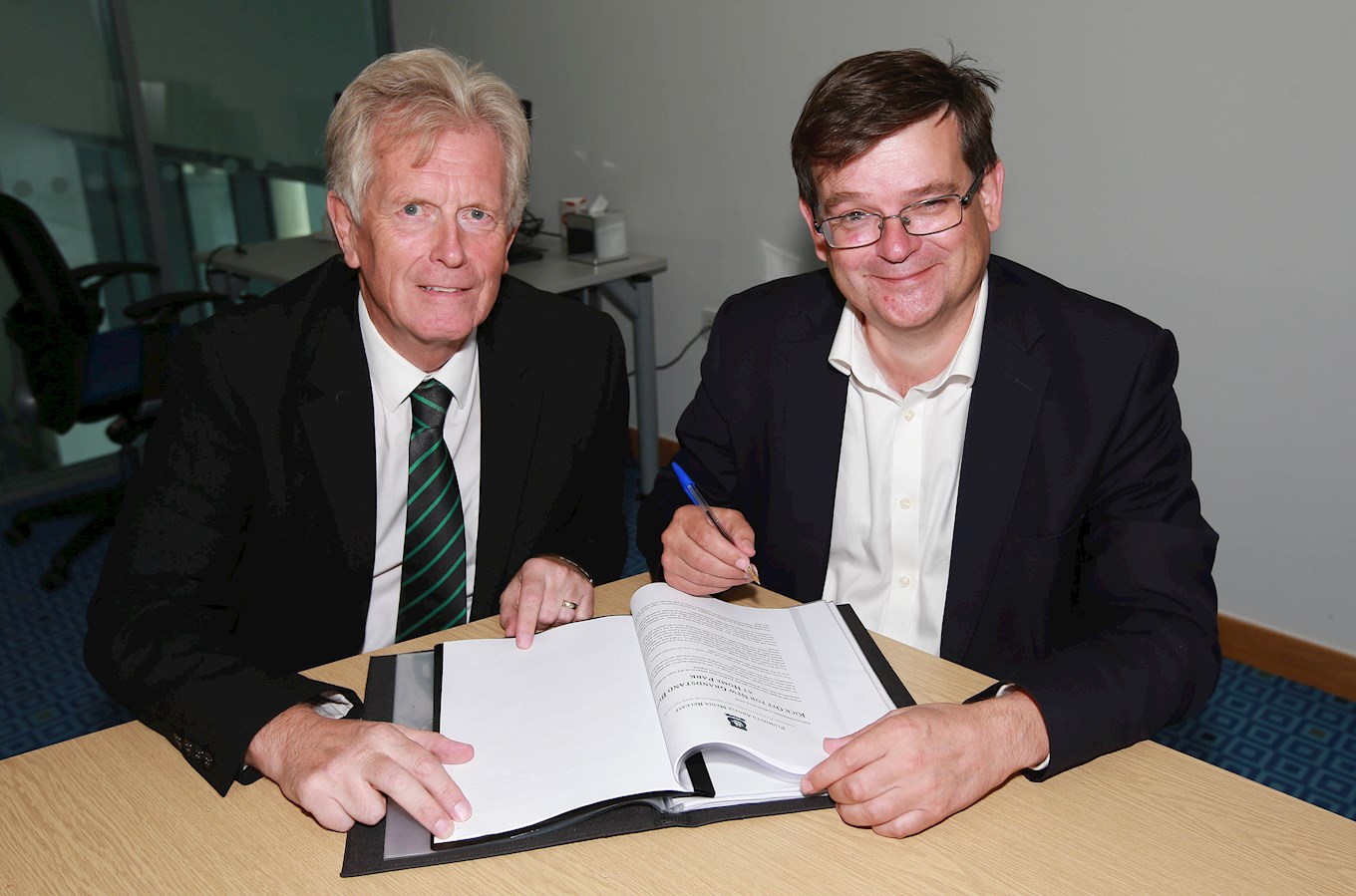 ARGYLE fans are to get the stadium they deserve as the main building contract for the redeveloped grandstand at Home Park is signed.

An agreement was signed on Wednesday, August 8, with specialist stadium developers GL events to start the main build of an exciting grandstand development at Home Park. Work is already under way under an enabling contract and will continue seamlessly to completion under the main contract.

The grandstand, which will take the historic name Mayflower, will open early in the 2019-20 season, in good time for the Mayflower 400 celebrations, in 2020.

The £6.5m+ build will deliver a high quality stadium. For fans the grandstand will have a new roof and better views. Extra seating will take total capacity to 17,904 and there will be an exciting new premium seating option. The flexible design will also allow an option to extend seating to over 20,000 in Phase 2, should demand require further expansion. Alternatively, should legislation permit, the capacity could be increased yet further through the re-introduction of standing in Phase 2, as is preferred by a number of our supporters. A new control centre has already been built and better changing rooms for players will follow shortly.

There will also be spacious new conference & banqueting facilities, providing major new tourism assets for the city. For visitors, there will be a range of upgraded facilities including new and improved toilets, a new club shop and ticket office, and supporters bars courtesy of the Green Taverners. The new facilities will add additional revenues enabling further investment in the club and the team going forward.

The expanded seating and improved facilities will provide scope for major concerts, festivals and large scale events in the future, enabling a boost to city tourism and further revenues to the club.

The new grandstand development comes at the end of seven successful years for League One team, Argyle. The average match attendance has grown every year from 6,000 to 10,400. There has been seven years of turnover growth and every year the Argyle team has finished higher in the league table than the year before.

Chairman James Brent said: "Argyle deserves a high quality stadium not just for the team and our loyal fans, but also for the wider community of Plymouth, to provide an economic driver of tourism. When Argyle emerged from administration seven years ago, the Board committed to delivering a new stadium. So I am delighted that we have now taken the crucial step to realising our vision for Home Park.”

Argyle manager Derek Adams said: “This is what we’ve been looking forward to for a long time - the moment when work can begin in earnest on an improved stadium. A high quality grandstand and facilities will further raise our ambitions as a team, and really help to drive the momentum. It’s what the fans and team deserve after seven years of commitment and success.”

CEO Michael Dunford said: “One of the reasons I joined Argyle just over a month ago was to help realise the benefit of an improved Home Park with new grandstand and enhanced facilities. It’s a very exciting time for Home Park and I am really looking forward to seeing the grandstand delivered and it driving even more success for Argyle.”

Stadium developers GL events have a strong track record in building stadia. In 2012 they were involved in the Olympics, and have delivered work for EFL sides Blackpool, Watford and Barnet as well as rugby clubs, including Gloucester, Harlequins and Worcester.

Scott Jameson, Managing Director for GL events UK, said: “We are delighted to be signing this contract, which cements our relationship with Plymouth Argyle to build their new grandstand. GL events has a market-leading track record of success in high quality construction for sporting events – from permanent and temporary grandstand seating, to event structures and overlay – and we look forward to the successful delivery of this project.”

James Brent continued: “Finally I’d like to say a huge thank you to the fans (in particular our focus group, GAGWAG), my colleagues and the professional team, the team, our board, Simon and Jane Hallett - who provided the funding - our sponsors, the City Council, the city of Plymouth and our wider community for all their support in making this happen.

"We all did this…we are Argyle.”