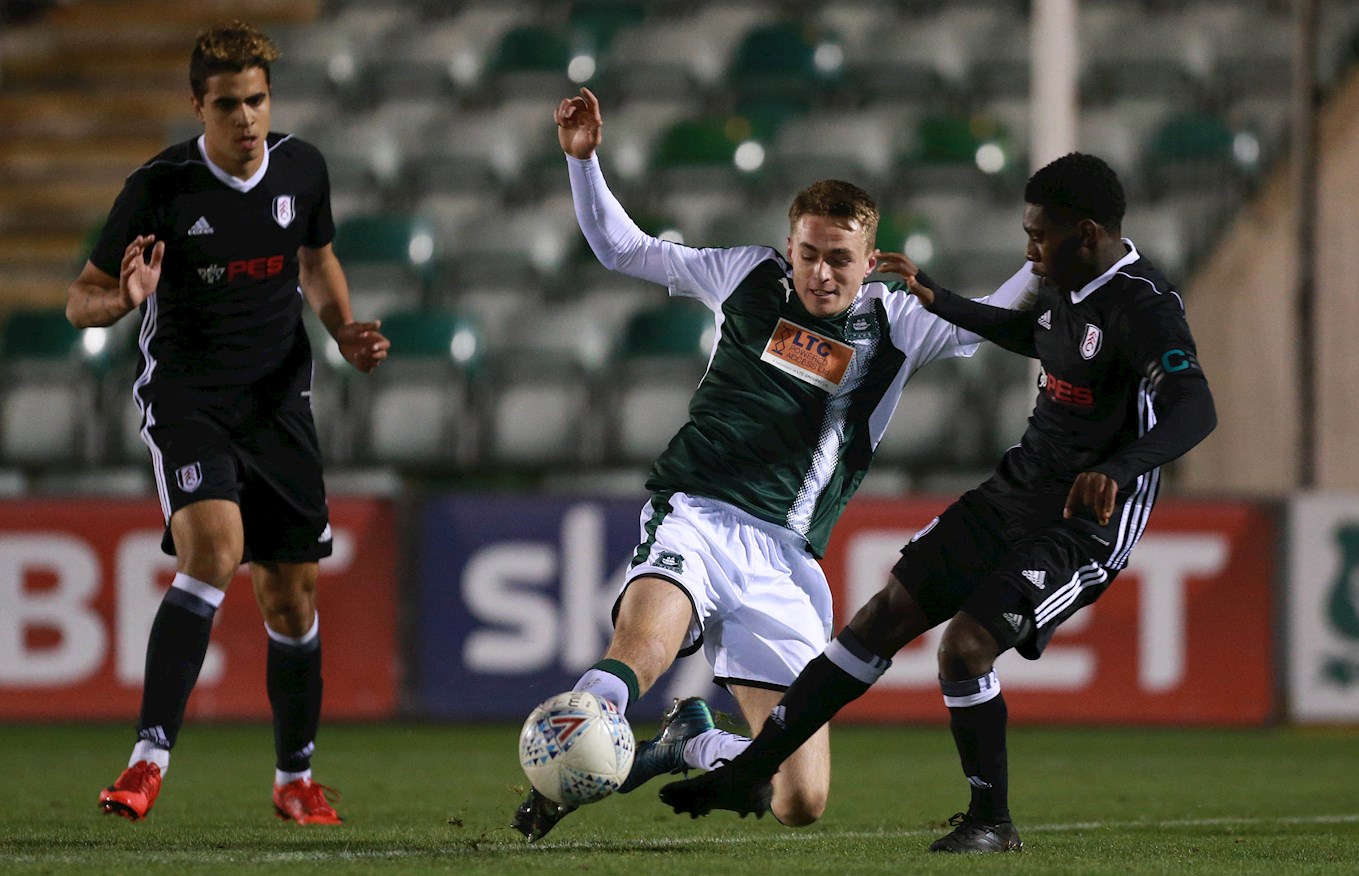 Klaidi Lolos capped off a superb first half for the under-18 side, scoring on 22 minutes to grab a deserved lead. A classy finish from Nicolos Santos-Clase levelled things up with 20 minutes to go and, once the game headed into extra time, tiredness began to show. Substitute Fabio Carvalho made it 2-1 to Fulham in the first 15 minutes of the 30 added on, and Jayden Harris put the tie to bed in the final 15.

After the senior team’s memorable pair of fixtures against Liverpool in the Emirates FA Cup last season, the youth squad have taken it upon themselves to create some cup memories of their own this season. Following wins over Eastleigh and AFC Wimbledon, Kevin Hodges’ team saw off the might of Manchester City and Burnley to earn this last 16 tie with the West London Whites.

For a touch of context to go with Argyle’s rampage through the Youth Cup, Fulham play in the South section of the U18 Premier League – the top flight of English football at that age level. They currently sit fifth, after easing past Reading 4-0 over the weekend. In the North section, Manchester City are third, behind only Liverpool and Manchester United. Burnley’s youth team, meanwhile, play a level below, in the Under-18 Professional Development League. They are joint-top of the North section with Leeds United and Bolton Wanderers.

A level below that, you’ll find the Young Pilgrims, in the South West Division of the Youth Alliance, sitting seventh. Regardless of the age level, then, this had been a giant-killing cup run to remember well before a ball had even been kicked against the Cottagers.

Hodges’ attempts to continue that run saw him make two changes to the side that saw off Burnley. Harry Hodges and Matt Ward, the latter a second-half substitute at Turf Moor, came into the side, in place of Michael Peck and Rio Garside.

With a home tie against either Chelsea or Tottenham Hotspur awaiting the winners, a nervy start was expected under the Home Park floodlight. Fulham grew into the game quickest, as Sonny Hilton’s cross-cum-shot skidded through that famed corridor of uncertainty, but away to safety.

Defensive resilience had been a key trait of Argyle throughout their cup run, and it was clear that more of the same would be needed to hold off Fulham’s attacking threat. After Hilton’s effort, Timmi Abraham (brother of full England international Tammy) volleyed his shot over from ten yards out.

The Young Pilgrims would have to maintain a threat of their own going forward, though. Ward broke free of his central midfield position in the ninth minute to put in a right-wing cross; it eventually fell to Ryan Law, who hit his 20-yard shot into the turf and wide. Klaidi Lolos, who scored the injury-time winner against AFC Wimbledon in the second round, then forced Fulham ‘keeper Luca Ashby-Hammond into action for the first time.

Sole striker Lolos was clearly confident, and had the poise and precision to turn that into an opening goal for the Greens after 22 minutes. Hard work from Ward in midfield and a calm through ball to Lolos gave a sight of goal. As Klaidi took his time and defenders closed in, it appeared the chance had gone, but he found the bottom corner on the turn to put the cogs of another giant-killing in motion.

Fulham seemed flummoxed, as Argyle’s threat on the counter, especially down the right flank, continued to cause problems. A well-weighted ball from Cameron Sangster put Lolos down the right flank, prompting Ashby-Hammond to fly out of his goalmouth. Lolos beat the shot-stopper to the ball and tried to find the empty net from a tight angle, with the ball rolling inches wide of the far post.

Perhaps surprisingly, given the context, the youngsters were constantly calm and efficient in possession. More precise passing and intelligent runs allowed Lolos to break through the right channel and fizz a low cross in that Luke Jephcott could not quite catch up to.

The first half looked like it would close without Fulham threatening at all to find an equaliser. Three minutes from the break, through, a superb cross-field ball found Joe Felix on the left wing. He found a way past Harry Hodges and put in a low cross; Argyle captain Harry Downing positioned himself well to deal with the danger, but a looping slice narrowly over his own goal probably was not what he had in mind.

The possession-based fightback from Fulham that we expected quickly materialised in the second half. Winger Chris Kelly found a little more joy, though his deliveries would only find a sliding Hodges or a towering Downing. Defensive qualities that had served the Pilgrims so well in previous rounds was showing; the midfield three of Sangster, Ward and Tom Purrington were so rarely wasteful with the ball, whilst the defensive quartet were well-positioned throughout.

Kelly was clearly the main source of potential for the visitors, using pace and guile to test Hodges thoroughly. Another left-wing cross somehow evaded everyone on its way through the penalty area, meaning Michael Cooper reached the hour-mark without having to make a save.

However, as high-flying Premier League youth side, you knew that Fulham would not need much to find a way back into the game. Santos-Clase, scorer of both Fulham's goals against Swansea in the last roudn, worked himself a yard of space on the edge of the box and cut a shot to the far corner that few ‘keepers would have a shot at stopping. With 20 minutes to go, it was all square.

The tide threatened to turn totally in Fulham’s favour. Argyle suddenly had less time on the ball and more agile obstacles in black shirts to navigate around. Santos-Clase almost broke through with a mazy run, before Cooper’s palms were finally tested by De Havilliland’s long-range effort.

Cooper’s considerable talent was once again on show in the final minutes of normal time. First, Joe Felix found his way into the area after great play on the left flank, but before he could let a shot off, saw the ball smothered at his feet by the goalie. Then, in stoppage time, De Havilland and Felix were both denied in a frantic finish, earning the Greens another 30 minutes to find a way back in front.

The expected tropes of an underdog side in extra time quickly appeared as play resumed. Argyle looked understandably leggy, yet defiant, with Downing and Elliott Crawford throwing themselves in the way of Fulham shots. The visitors were eager to move the ball around quickly and test the stamina of Kevin Hodges’ battling side, and gaps inevitably began to show. Jayden Harris took on the daunting prospect of running around Sangster and into the box; a mission he accomplished, but Cooper was on hand to turn his shot past the near post.

Fulham runners were becoming more and more difficult to track, and that was the key for the visitors edging ahead on the stroke of half time of extra time. Calm possession around the Argyle box concluded with Tyrese Francois found 15-year old substitute Fabio Carvalho, whose shot span slowly into the far corner.

Out on their feet, it was always an uphill struggle for Argyle to find an equaliser in the final 15 minutes. Rio Garside was brought on to add energy going forward, but he helpless to stop Harris breaking through with pace and slotting his shot underneath the oncoming Cooper to make it 3-1.

Final Argyle sub Michael Peck came close to offering a glimmer of hope, missing narrowly with his first touch. That glimmer turned to a beacon of light as Law won the Pilgrims a penalty, but Sangster could not beat Ashby-Hammond from the spot.

The FA Youth Cup adventure was over for these brave Pilgrims. But, once the short-term disappointment of defeat washes away, Kevin Hodges and his side are sure to be full of pride for producing a memorable cup run that gives them a taste of footballing glory. We look forward to seeing them come back for more.